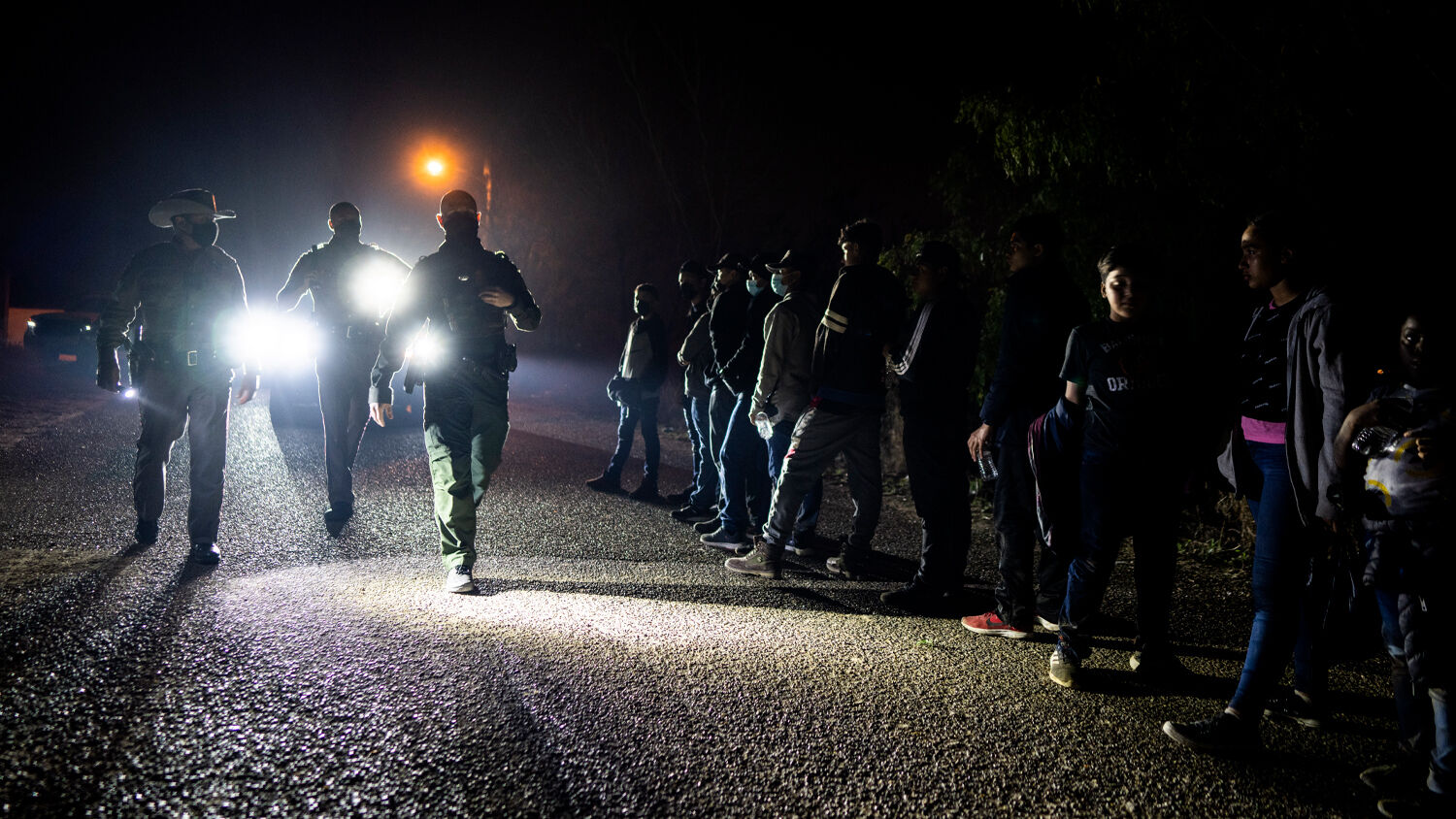 After crossing the Rio Grande River, migrants wait to be processed by Border Patrol officers on April 24, 2021 in Roma, Texas.
Benjamin Lowy/Getty Images

Foreigners are eating away America’s strength, yet many refuse to recognize it.

Governors from 20 Republican states are urging the Biden administration to do something about the immigration emergency on America’s southern border. “The crisis is too big to ignore and is now spilling over the border states into all of our states,” they said in an open letter to the White House. “This administration has enticed a rush of migrants to our border and incentivized an influx of illegal crossings by using irresponsible rhetoric and reversing a slew of policies—from halting border wall construction to eliminating asylum agreements to refusing to enforce immigration laws. Even officials of our neighbor, Mexico, reportedly conveyed concerns that the shift in U.S. policy is stoking illegal immigration and creating business for organized crime.”

According to data released by U.S. Customs and Border Protection on May 11, the number of illegal immigrants apprehended at the southern border hit a 21-year high last month. Border patrol agents encountered 178,622 people attempting to enter the United States in April, the most since April 2000 (when 182,613 illegal immigrants were apprehended). And unlike past migrant surges predominantly made up of Central American families and unaccompanied children, over 60 percent of the 440,000 migrants apprehended since Biden took the White House have been single adults.

Yet while the number of people attempting to illegally enter the U.S. hit a 21-year high, the number of people deported by U.S. Immigration and Customs Enforcement hit an all-time low. Border security officers only deported 2,962 immigrants in April, the first time the monthly figure has dipped below 3,000 people. This is because the Biden administration has issued new rules to fetter Immigration and Customs Enforcement officers, who were given wide latitude under the Trump administration to enforce U.S. immigration policies and laws.

Since migrants keep coming and the current administration refuses to deport them, federal officials want to use taxpayer dollars to fly migrants who illegally cross the U.S.-Mexico border to the U.S.-Canada border for processing—as a means of easing pressure on overwhelmed and overcrowded detention facilities in Texas.

Drug cartels are exploiting the migrant crisis on America’s southern border. Border Patrol agents have detained twice the number of criminal migrants in the past six months as they did the previous 12 months. Among these criminals were 265 sex offenders; 576 individuals convicted of assault, battery and domestic violence; and 982 drug offenders. The bulk of the arrests, however, involved illegal entry after a previous deportation.

Border Patrol also reports huge increases in marijuana and methamphetamine seizures on the southern border. “We have seen an incremental increase in narcotics between the ports of entry since the beginning of the fiscal year,” Customs and Border Protection told Border Report in a statement. “Although there are still restrictions in place due to the covid-19 pandemic, drug trafficking organizations are increasing their smuggling tactics between the ports of entry, taking advantage of the high flow of people entering illegally into the United States.”

Therefore, the border crisis is also a cartel crisis. Powerful criminal syndicates like the Sinaloa Cartel and the Jalisco New Generation Cartel are making billions trafficking drugs and charging migrants a fee to cross the Rio Grande. Jaeson Jones, a retired captain for the Texas Department of Public Safety, told the Federalist that smugglers are now requiring migrants to wear wristbands so they can keep track of who has paid for transit into the United States.

On May 5, a National Guard member working near Eagle Pass, Texas, found a gym bag in the tall grass containing eight AK-47-style pistols and 10 30-round AK-style magazines. The Federal Bureau of Investigation reports that Mexican cartels are aggressively recruiting El Paso gang members to help distribute their drugs. The immigration crisis on the southern border is making America a much more dangerous place.

“Ephraim allows himself to be mixed up with foreigners; Ephraim has become a cake unturned as it was baked. Foreigners eat away his strength, unknown to him; grey hairs are on him here and there, unknown to him. Israel’s pride shall confront and convict them; yet they will not come back to the Eternal their God, nor seek him, in spite of it all. Ephraim is like a silly, senseless dove, crying to Egypt, flying to Assyria; but as they fly, I fling my net on them, and bring them down like a bird, punishing them for their misdeeds” (Hosea 7:8-12; Moffatt translation).

Hosea often refers to the northern 10 tribes of Israel, which split away from the kingdom of Judah, as “Ephraim,” the most prominent tribe, and “Samaria,” the capital. Yet the prophecies of Hosea were spoken to Ephraim and Manasseh jointly, at a time when both tribes were ruled by King Jeroboam ii and his successors. So, when Hosea says, “Ephraim mixes himself with the peoples,” he is saying foreign immigrants will devour Israel’s strength until the nation cries out to Assyria for help.

“It is time for the American people to wake up!” wrote Trumpet editor in chief Gerald Flurry in his article “Communism in America Today.” “Or is it already too late? The Prophet Hosea says that we allow ourselves ‘to be mixed up with foreigners. … Foreigners eat away his strength unknown to him’ (Hosea 7:8-9; Moffatt translation). Foreigners are eating away America’s strength, yet we don’t even realize it because we have forsaken God. It is amazing how few people will really talk about what is happening. Our people are sick in their reasoning and are faint of heart (Isaiah 1:5). When they see something fearsome, they are afraid to face it!”

Media reports are actually citing climate change as the root cause behind the illegal immigration crisis at the U.S. southern border; like a silly, senseless dove. So, it appears that the flood of unvetted foreigners pouring across America’s southern borders will continue until America is brought down like a bird in a fowler’s net!