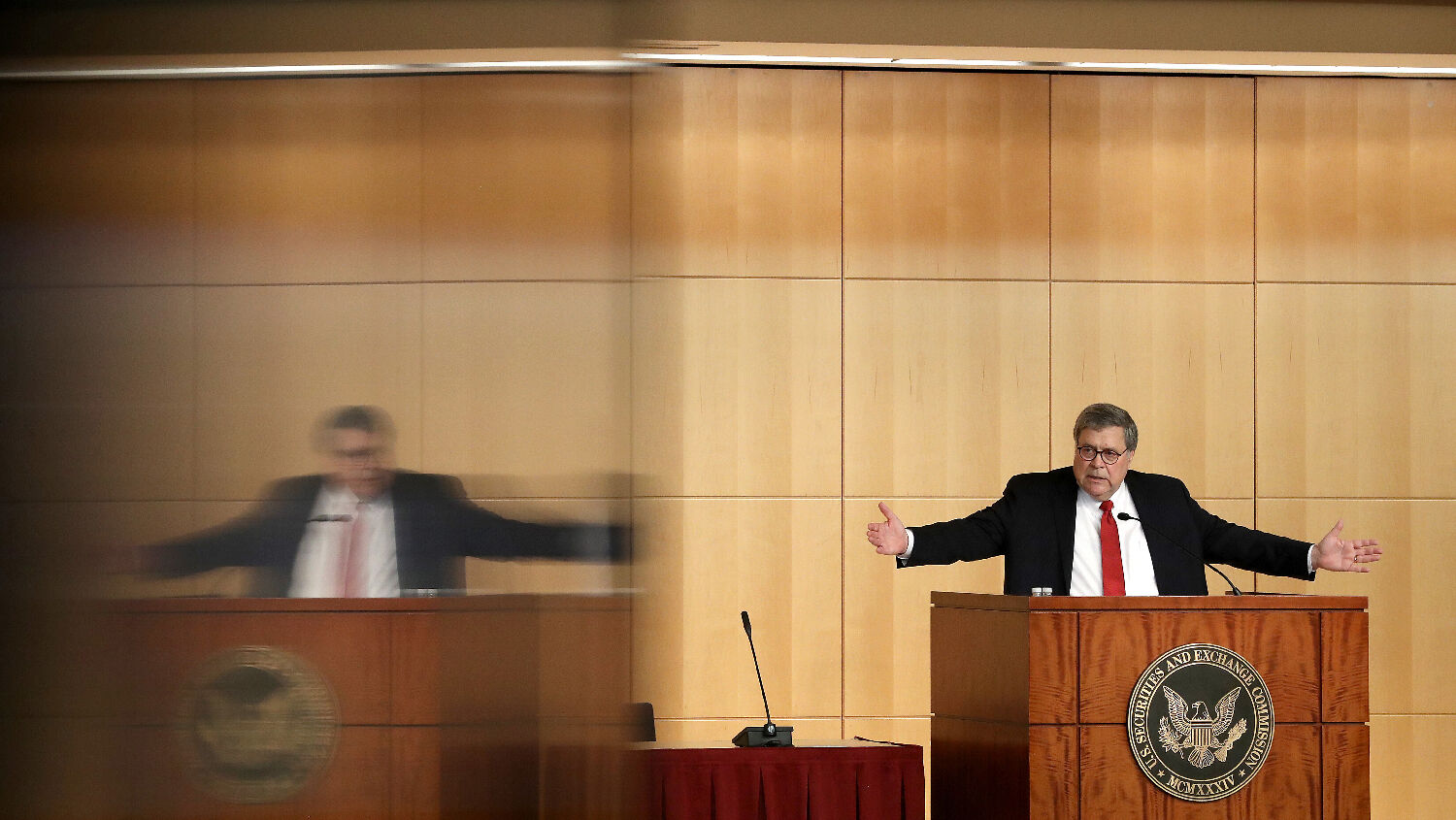 Attorney General William Barr exposed the radical left’s attack on the United States Constitution and the rule of law during a lecture last Friday at the Federalist Society’s 2019 National Lawyers Convention.

During his lecture, the attorney general accused Democrats of “waging a scorched-earth, no-holds-barred war of resistance” against President Donald Trump designed to “sabotage the functioning of the executive branch.” This war of resistance may seem like an attack on President Trump, but it is actually an attack on the Constitution.

“One of the ironies of today is that those who oppose this president constantly accuse this administration of ‘shredding’ constitutional norms and waging a war on the rule of law,” said Mr. Barr. “When I ask my friends on the other side, what exactly are you referring to? I usually get vacuous stares and sputtering about the travel ban or some such thing. … What I am talking about now are fundamental constitutional precepts. And the fact is that this administration’s policy actions and its policy initiatives, including the travel ban, have transgressed neither constitutional, nor traditional norms and have been amply supported by the law and patiently litigated through the courts to vindication.”

By questioning the legitimacy of a duly elected president dedicated to enforcing laws already passed by Congress, the radical left is exalting its own agenda above America’s constitutional system of government. Attorney General Barr further noted that the fact radical leftists are using the term “resistance” to describe their opposition to President Trump implies that the Trump administration seized power by undemocratic and illegal means.

Even mainstream news sources like the New York Times are starting to openly admit that the only way to defeat President Trump’s agenda for America is to abandon the Constitution and establish a new political system.

“Our ideal should be a strong federal government powered by a proportionally elected unicameral legislature,” Meagan Day and Bhaskar Sunkara wrote in the New York Times last year. “As long as we think of our Constitution as a sacred document, instead of an outdated relic, we’ll have to deal with its anti-democratic consequences.”

Trumpet editor in chief Gerald Flurry exposed how dangerous this thinking is in his article “The Roots of America’s Dangerous Turn Left.” “You would think Americans would love the Constitution, but that is not the case in this country anymore,” he wrote. “The radical left wants to destroy the Constitution! Many even argue that it is not the supreme law of the land and that we should get rid of it! Most of the educational institutions and the media would like to get rid of it. Even one of the Supreme Court justices said the Constitution is outdated and should not be used. This thinking is bringing America down!”

The Prophet Ezekiel foretells of a time when the modern-day descendants of ancient Israel (American and Britain primarily) will be plagued with violence. “Make a chain: for the land is full of bloody crimes, and the city is full of violence. Wherefore I will bring the worst of the heathen, and they shall possess their houses: I will also make the pomp of the strong to cease; and their holy places shall be defiled” (Ezekiel 7:23-24).

A grand lesson we can learn from history is that once the habit of disregarding legality begins to spread, the rule of law begins to collapse. The end result is anarchy and the tyrannical rule of men. For a deeper understanding of this important truth, please request a free copy of No Freedom Without Law, by Gerald Flurry.