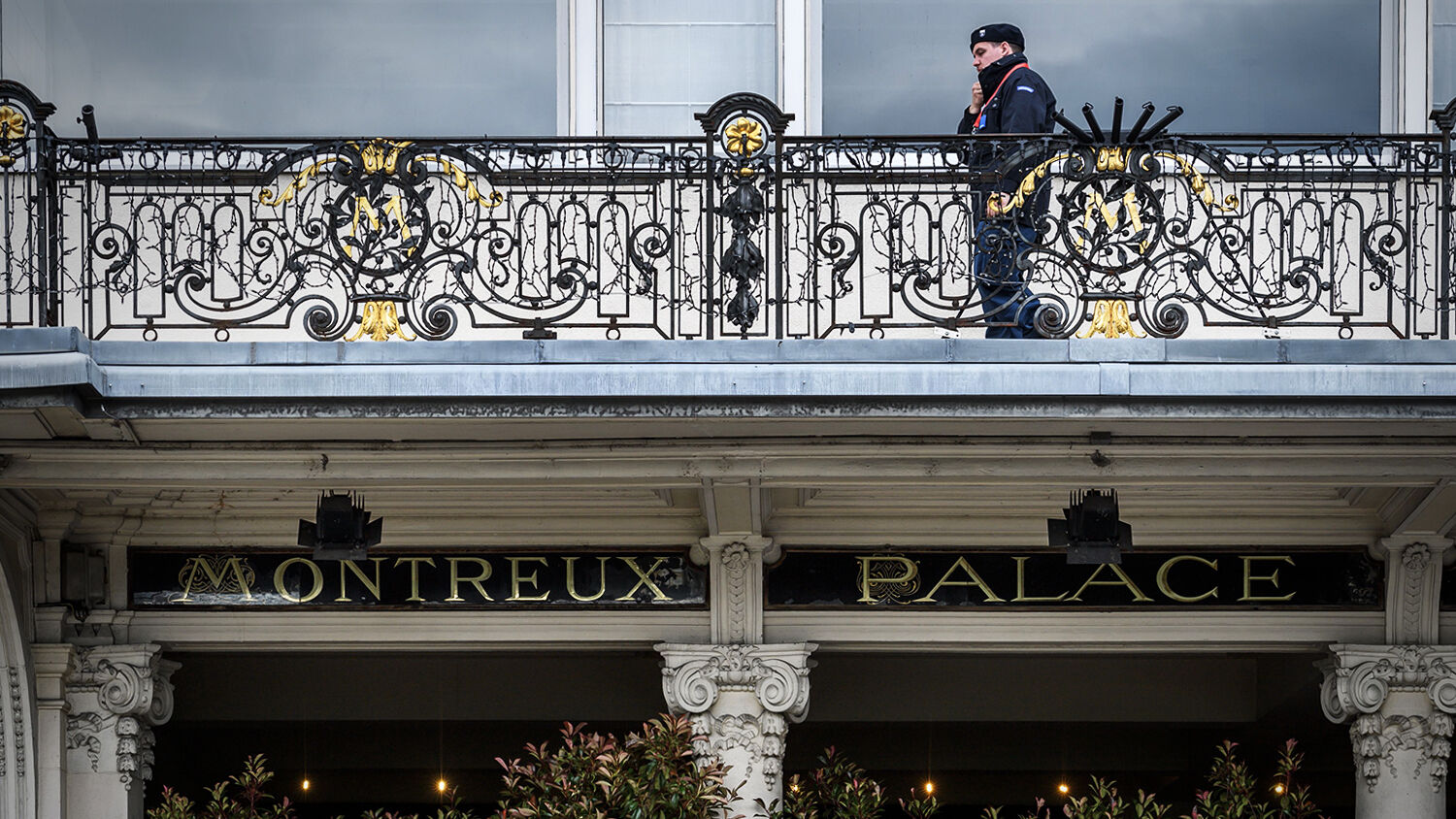 A private security guard is seen above the entrance of the Fairmont Le Montreux Palace hotel in Montreux on May 29, which is scheduled to host the annual Bilderberg meeting.
FABRICE COFFRINI/AFP/Getty Images

It may not be the new world order conspiracy theorists imagine, but Bilderberg is still one of the most influential groups in the world.

A secretive group of some of the world’s top politicians, bankers and businessmen met today for its 67th annual conference. Since its inaugural meeting in May 1954, the Bilderberg Group has been an annual forum for elites from Europe and North America to discuss important issues away from the eyes and ears of the press.

According to the group’s website, “Every year, between 120-140 political leaders and experts from industry, finance, labor, academia and the media are invited to take part in the meeting. About two thirds of the participants come from Europe and the rest from North America; approximately a quarter from politics and government and the rest from other fields.” This year’s meeting in Montreux, Switzerland, lasts from May 30 to June 2.

According to a press release, topics for discussion include China, Russia, Brexit, the future of Europe, climate change, the future of capitalism, the weaponization of social media, the importance of space, the development of artificial intelligence, and the danger of cyberthreats.

The meetings are held under Chatham House Rule, meaning participants may use the information that is presented, but they may not reveal the identity of the speaker.

Due to the secrecy surrounding Bilderberg discussions, the conference has become a popular target of conspiracy theorists claiming that Bilderberg members secretly work with the Illuminati, the Freemasons or a secret cabal of shape-shifting lizards founded by the ancient Babylonian sorceress Semiramis.

Back in reality, it is true that the group was cofounded by two controversial figures: Prince Bernhard of the Netherlands and Polish political adviser Józef Retinger.

Bernhard, the former German prince of Lippe-Biesterfeld, was an SS intelligence officer attached to the main industrial supporter of the Nazi regime, I. G. Farben. The prince resigned from the Nazi Party in 1934 and married Princess Juliana, the future queen of the Netherlands.

Józef Retinger was thought to be an agent of the Vatican. According to British political commentator Rodney Atkinson, he was expelled from the Allied countries during World War i on suspicion of helping the superior-general of the Jesuits, Wlodimir Ledóchowski, plot the creation of a Central Europe Catholic federation. Retinger founded the European Movement in 1947, leading to the establishment of the Council of Europe in 1949.

Prince Bernhard and Retinger founded the Bilderberg Group primarily to create trans-Atlantic support for the idea of a United States of Europe.

Richard Aldrich, a professor at the University of Warwick, wrote in 1997 that the three groups most responsible for the European Union are: the Bilderberg Group, Retinger’s European Movement and Jean Monnet’s Action Committee for a United States of Europe. “Bilderberg was founded by Joseph Retinger and Prince Bernhard of the Netherlands in 1952 in response to the rise of anti-Americanism in Western Europe and was designed to define some sort of Atlantic consensus amid diverging European and American outlooks,” he wrote in Diplomacy and Statecraft. “It brought leading European and American personalities together once a year for an informal discussion of their differences.”

While the Bilderberg Group may not be the secret world government of conspiracy theory lore, it is still a highly influential group. “[T]his group is not a tight-knit group of conspirators setting out to destroy nations,” explained Rodney Atkinson in a 2001 interview with Trumpet editor in chief Gerald Flurry and late Trumpet columnist Ron Fraser. “They’re the kind of people selected on the basis that they might say yes to international supernational corporatism, which is the foundation, of course, of the modern European Union ….”

While many Bilderberg supporters have legitimate concerns about the need for a trans-Atlantic alliance to counter the rise of Russia and China, Bible prophecy reveals that America’s relationship with Europe will end in disaster.

Tragically, America is responsible for creating many of the globalist movements that threaten it today—and nowhere is that more true than in Europe.

The U.S. government cooperated with the Catholic Church, European politicians and even former members of the Nazi Party to build a European superstate capable of helping it oppose the Soviet Union. Instead of trusting God and striving to obey His law, the people of Britain and America have trusted in nations that will turn out to be enemies. Building up the EU and Germany will prove to be one of the most foolish decisions these nations have made.

The Bible prophesies of a corporatist empire that will straddle the Atlantic Ocean in the time just before Jesus Christ’s return. This resurrected Holy Roman Empire will be led by Germany and the Vatican, and it will cause the “merchants of the earth” to wax “rich through the abundance of her delicacies” (Revelation 18:3-13).

Both America and Britain will be suddenly and violently conquered by this rising superpower.

God allows this to happen because these nations have turned away from Him. But God also reveals how individuals can be protected from this unparalleled disaster. The book of Ezekiel was written specifically for this end time. (Request a free copy of Ezekiel: The End-time Prophet, by Gerald Flurry.)

Ezekiel 33:10-11 state: “Therefore, O thou son of man, speak unto the house of Israel; Thus ye speak, saying, If our transgressions and our sins be upon us, and we pine away in them, how should we then live? Say unto them, As I live, saith the Lord God, I have no pleasure in the death of the wicked; but that the wicked turn from his way and live: turn ye, turn ye from your evil ways; for why will ye die, O house of Israel?”

God takes no pleasure in the death of the wicked. “Why will ye die, O house of Israel?” What a terrifying question! Yet even if the nations of Israel reject God’s warning, they will eventually repent after they have experienced the worst suffering ever. Then He will make them the chief nations of the wonderful World Tomorrow. It is a matter of life-and-death importance that everyone who hears this message sit up, pay attention and note the seriousness of the times.

For more on what the Bible says about this trans-Atlantic empire, read The Holy Roman Empire in Prophecy.