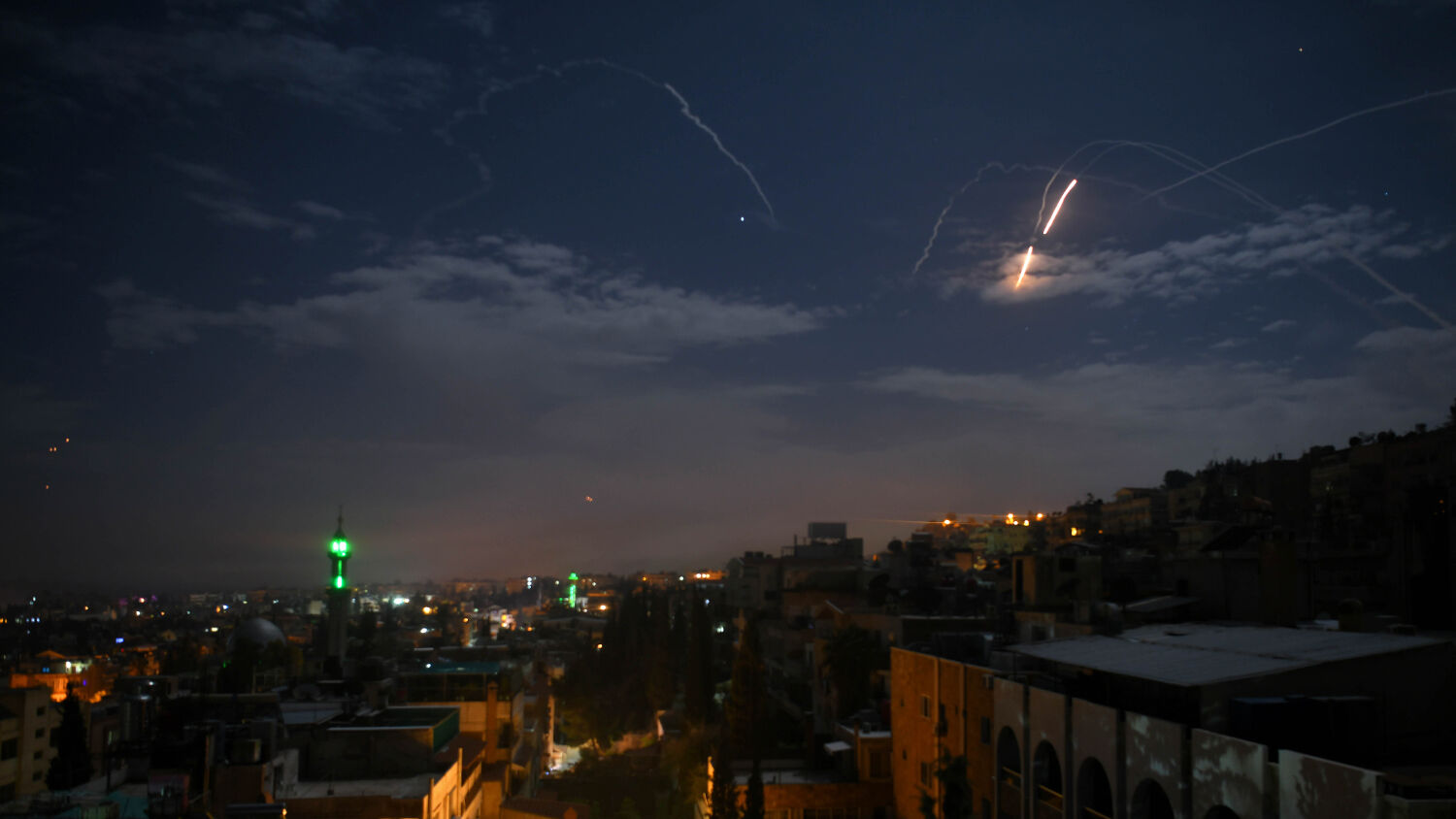 Echoes of an ancient prophecy are playing out on the Eastern Syrian battlefield.

jerusalem
Overnight on Tuesday, Israeli jets struck over a dozen targets in eastern Syria belonging to the Syrian and Iranian regimes. According to the Syrian Observatory for Human Rights, 57 people were killed in the attack; the majority were members of Iran-backed militia. This week’s air attack marks the fourth occasion in two weeks where Israel has targeted Iranian assets in Syria, and it marks a substantial uptick in military activity.

Eastern Syria has long been a target for Israeli jets, as Iran uses factories and warehouses in the region to store weapons before they are transported across Syria toward the Jewish state. In this case, United States officials confirmed that the strikes targeted warehouses that were also used to store components that support Iran’s nuclear weapons program.

Tuesday’s attack was unique because for the first time Israeli authorities publicly acknowledged it was organized in cooperation with United States intelligence. On Wednesday, a senior United States intelligence official with knowledge of the attack told the Associated Press that U.S. Secretary of State Mike Pompeo was directly involved in coordinating the attack with Israel.

He admitted that Mr. Pompeo discussed the airstrikes with Yossi Cohen, the head of Israel’s Mossad Spy Agency, in Washington, D.C. two days earlier. Indeed, that meeting took place, out in the open, at the popular Café Milano in D.C. on Monday. White House reporter for Politico Meridith McGraw spotted the two at the spot, and let the world know on Twitter.

Regardless of the publicity, Syria was attacked one day later and the U.S. confirmed the strike was discussed in that meeting. “The remarks by the official after the attack marked a rare incidence of publicized cooperation between the two countries over choosing targets in Syria,” reported the Times of Israel (emphasis added throughout).

The timing of this is interesting and noteworthy. Mike Pompeo is one week away from leaving office. What is going on?

It has long been the Trump Administration’s position that Iran’s entrenchment inside Syria is unwarranted. When President Trump exited the Iran nuclear deal and reinstated sanctions on the regime, Mike Pompeo demanded that Iran get out of Syria. Number eight of his infamous list of 12 demands for Iran stated, “Withdraw all forces under Iran’s command throughout the entirety of Syria.” As part of its strategy to realize this demand, the United States maintains several bases in Eastern Syria. While these bases are supposedly part of America’s mission to curb the Islamic State, the primary purpose of these installations is to block Iran’s control of the border crossings between Iraq and Syria.

In June 2020, the U.S. imposed the most strict financial sanctions yet on the Syrian regime. Known as the Caesar Syrian Civilian Protection Act, the legislation empowered America to sanction any nation or individual that does business with sectors critical to the survival of the Assad regime. Today, anyone who does business with Syria outside of humanitarian support is subject to the full force of U.S. secondary sanctions. Iran too is under similar sanctions.

Finally, and most importantly, the United States has given free rein to Israel to conduct attacks against Iranian and Syrian forces inside Syria. This policy is the total opposite to the one instituted by the Obama administration. Eager for a nuclear deal with Iran, Barack Obama sought to restrain Israel’s actions inside Syria.

For four years, thanks to U.S. President Donald Trump’s support, Israel has been able to wage a limited war against Iran in Syria. However, while Israel has successfully limited Iran’s presence in Syria, it hasn’t eradicated it entirely. The public meeting on Monday between Yossi Cohen, a confidant of Israeli Prime Minister Benjamin Netanyahu, and Secretary of State Pompeo—followed by public admission that America and Israel coordinated the strike—raises an important question: Does this mark the beginning of a new joint campaign between Israel and the United States to remove Iran from Syria?

With one week to go before President Trump leaves office, might the United States and Israel be planning more extensive strikes inside Syria in the coming days? As Prime Minister Netanyahu would see it, Israel has only one more week before the return of Obama-era foreign policy. Former Vice President Joe Biden has already signaled his intent to resurrect the nuclear deal with Iran. And as before, it stands to reason that in order to even contemplate renegotiating the deal, Iran will tell Mr. Biden to stop Israel’s attacks inside Syria.

Given the massive threat an Iranian dominated Syria poses for Israel, it makes sense for Mr. Netanyahu to strike hard and fast right now. Surely the Pompeo/Cohen face-to-face meeting was about more than just Tuesday night’s strikes.

There is another way to look at this: What if the joint action between America and Israel marks the beginning of a new chapter in the conflict with Iran? Prime Minister Netanyahu has been extremely cautious as to not publically embrace the Biden transition team. Perhaps Mr. Netanyahu is holding out hope for a continuation of the Trump administration and with it the opportunity for a larger campaign against Iran in Syria.

The Trumpet fully expects President Trump to continue as commander in chief of the United States into a second term. With one week to go before the inauguration of America’s “new president” this projection seems unlikely. But, regardless of how it looks right now, Trumpet editor in chief Gerald Flurry still holds to his forecast that Mr. Trump will continue in office.

The foundation for this claim is rooted in Amos 7 and other biblical prophecies. Mr. Flurry shows in “Why Donald Trump Will Remain America’s President” that President Trump fulfills the modern type of the ancient King Jeroboam ii. This ancient king, whose existence was just authenticated in an archaeological discovery last month, ruled over the northern tribes of Israel in the eighth century b.c.

Prior to his reign, the Kingdom of Israel was suffering from a debilitating affliction internally that would have sent them into captivity. Yet in His mercy, God raised up a carnal, unrighteous king to save the nation and delay the impending doom. 2 Kings 14:26-27 states, “For the Lord saw the affliction of Israel, that it was very bitter: for there was not any shut up, nor any left, nor any helper for Israel. And the Lord said not that he would blot out the name of Israel from under heaven: but he saved them by the hand of Jeroboam the son of Joash” (verses 26-27).

As Mr. Flurry explained in his landmark article, “Saving America From the Radical Left—Temporarily,” were it not for Donald Trump, the constitutional republic of the United States would not have survived. This reality has been confirmed by recent events, which reveal how desperately the radical left hates America, and the extreme measures they are willing to take to destroy traditional America. And yet God provided a temporary respite for the United States (which makes up part of the modern descendants of the ancient northern Israelite tribes, as proved in Herbert W. Armstrong’s book, The United States and Britain in Prophecy), through the election of President Trump.

But Mr. Trump’s leadership has not only saved America. The policies of the Trump administration have done much to save Israel, particularly from Iran. This regime was deliberately empowered by the Obama administration, not in spite of its hatred of the Jewish state, but because of it. This all changed when President Trump came into office. Mr. Trump tore up the nuclear deal and subjected Tehran to some of the harshest sanctions America has ever imposed. Correspondingly, Mr. Trump unabashedly supported the Jewish state at every turn. He is the most pro-Israel president in U.S. history.

The parallel with biblical history is striking. In the eighth century, there was a strong alliance between the northern kingdom of Israel, led by Jeroboam ii, and the southern kingdom of Judah (the forefather of the Jews today). Under King Uzziah and Jeroboam ii, the combined territory of both kingdoms swelled to dominate the area from the Red Sea in the south to the Euphrates in the north, almost eclipsing the territorial might of King Solomon.

The territory that comprises modern Syria was integral to the kingdoms of Israel and Judah. Of the seven verses describing Jeroboam’s rule in 2 Kings, two detail the expansion of territory. One of those has baffled scholars for decades, particularly because of the mention of Judah. “Now the rest of the acts of Jeroboam, and all that he did, and his might, how he warred, and how he recovered Damascus, and Hamath, which belonged to Judah, for Israel, are they not written in the book of the chronicles of the kings of Israel?” (2 Kings 14:28).

Although this verse is somewhat obscure, it clearly indicates that the kingdom of Judah benefited from Jeroboam’s military prowess. Some biblical scholars even suggest there was a military alliance between the kingdoms of Israel and Judah, and that they conquered the region of Syria together. Given that President Trump is going to have a second term, could it be that Tuesday’s strikes on Syria by the United States-Israel military alliance are a sign of greater action to come? Or perhaps, when Syrian President Bashar Assad sees that President Trump has four more years, will he finally be willing to ditch Iranian patronage?

The Bible is clear from other prophecies that Syria is destined to fall out of the Iranian orbit. It is also clear that ultimately, Syria will be aligned with a coming European power, led by Germany. For more of our longstanding Syria forecast, you can read “How the Syrian Crisis Will End.”

However, regardless of how Syria falls out of Iran’s hands, the fact remains that we are seeing an unprecedented level of cooperation between the United States and Israel under President Trump. Israel’s anti-Trump, anti-Netanyahu left-wing media bias aside, the large majority of Israelis know that President Trump has been a gift for the Jewish state. And although Israelis typically prefer not to ask others for help, nor would they admit they are in need of saving, it must be acknowledged that just as God has used President Trump to temporarily save the United States, Israel too has been a beneficiary of God’s mercy.