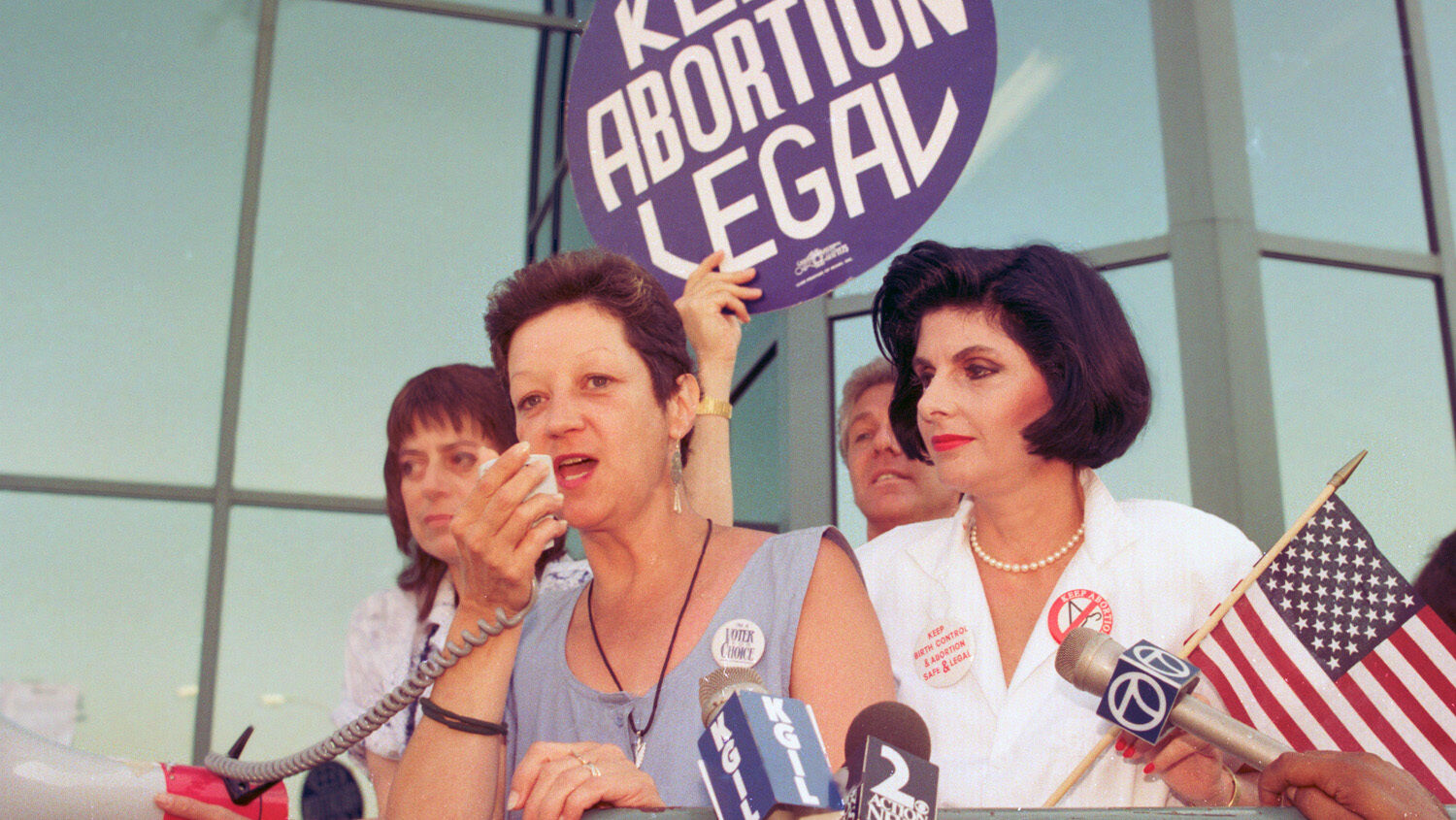 The violence currently tearing America apart started with a lie about a gang rape that never happened.

Roe v. Wade came in with a whimper, but it resulted in a roar. In 1973, the Supreme Court ruling on the case barely made headlines. It was overshadowed by the death of President Lyndon B. Johnson and by the withdrawal of United States troops from Vietnam. A total of 58,220 American troops died in that war, one for every 1,081 unborn babies who would be killed over the next 50 years.

Servicemen coming back home returned to a country where murdering unborn babies was now a newly invented “constitutional right.” And that right was predicated on a big lie.

Jane Roe was the plaintiff in the case. But her real name was Norma McCorvey. Norma was a child of divorce, she began committing crimes at age 10, she became a ward of the state, she abused alcohol and took drugs, and if her accounts are to be believed, even worse things happened to her. Her life was wildly unstable.

But some of her accounts are not to be believed. In 1969, 21-year-old Norma became pregnant for the third time and wanted to have the baby killed. But Texas law prohibited abortions except in certain cases. So she claimed she had been raped by a group of black men. This ploy failed, due to lack of police evidence. An attempt to get an illegal abortion also failed.

Eventually she ended up meeting two lawyers who were looking for a woman in her situation in order to launch a lawsuit. The rest is—bloodstained—history.

Norma’s lawyers filed suit in U.S. District Court for the Northern District of Texas on her behalf. (She reportedly never attended any of the trials herself and lost track of them.) Years later, after the baby had already been born and given to an adoptive family, the Supreme Court made its ruling that would affect far, far more people, born and unborn: It ruled that that child should have been killed.

In one of its most famous decisions in modern history, the court stated that the decision to abort a child must be made between a woman and her doctor, and that no state or other entity may interfere to advocate for the rights of the unborn child.

The Supreme Court ruled that the due process clause of the 14th Amendment of the U.S. Constitution guaranteed a fundamental “right to privacy” that protects a pregnant woman’s liberty to abort her unborn child, something that no state, no session of Congress and no Supreme Court had ever determined. A subsequent 1992 ruling in Planned Parenthood v. Casey overturned Roe’s trimester framework (killing “the potentiality of human life,” the baby, could be banned in the third trimester but not the first). But it upheld the “right to privacy” reasoning. Yet a woman’s “right to privacy” does not supersede a child’s right to life, and all powers not explicitly delegated to the federal government by the Constitution are reserved for the states by the 10th Amendment.

The majority opinion overturning both Roe and Planned Parenthood at the end of June reviewed the provisions of the Constitution, with the reminder that an unspecified right (to abortion) must be “deeply rooted in this nation’s history and tradition” before it can be recognized as a component of the “liberty” protected in the due process clause. And since state laws against abortion have existed from the time the Constitution was ratified until the day Roe v. Wade was decided, no deeply rooted unenumerated right exists. The notion that the U.S. Constitution supersedes all state laws for the purpose of protecting abortion is a big lie.

Besides being an excuse to twist and erode the Constitution, the entire premise for McCorvey’s “need” for an abortion, the tragic gang rape, was a big lie. As late as 1983 she claimed that her now-teenage child, wherever she was, was the result of rape. Then in a 1987 televised abc News interview, journalist Carl Rowan asked whether or not she had been raped.

“So all those stories that are in the books and so forth are not true?”

So the entire Roe v. Wade case started with a rape that never happened and resulted in a “constitutional right” that never existed. Since Norma’s lie, 63 million babies have been killed before they were born.

According to the Guttmacher Institute, just 1 percent of abortions involve a pregnancy through rape (less than 0.5 percent involve incest). That means that 62.1 million babies have been aborted just because their parents did not want them.

Radical leftists say the “big lie” is that Donald Trump actually won the 2020 presidential election. Yet they are ready to tear the country apart over an issue that traces back to a gang rape lie and killed more than 60 times as many Americans as have been killed in all wars combined.

After the Supreme Court overturned Roe v. Wade over a week ago, leftists have been literally screaming in outrage. But they are not just thinking about the 1 percent of abortions that involve rape. They are thinking of how much more difficult it will be to have promiscuous sex! As one pro-abortion singer put it, Roe v. Wade “allowed women to find their sexuality without fear, to be playful and spontaneous.” This is why many abortionist women have reacted by, ironically, going on a “sex strike.”

The idea that the former “constitutional right to abortion” is mainly or largely about dealing with babies conceived by rape is a big lie! How appropriate that is.

Abortion on demand is a sacrosanct right to radical leftists for an even bigger reason than allowing “women to find their sexuality without fear.” Why are leftists so persistently, aggressively, violently opposed to saving sex for marriage, for raising children in families? Because they want to destroy family!

That is not hyperbole. Philosophers and other leaders of leftism have specifically, unambiguously stated that the institution of family as we know it must be destroyed, that a major weapon for destroying family is sexual promiscuity, including homosexuality, and that abortion is needed to help women and men engage in “finding their sexuality without fear.”

Remember when the radical left engaged in hyperbolic slander of Brett Kavanaugh to keep him from being confirmed to the Supreme Court? Christine Blasey Ford and two other women publicly accused Kavanaugh of sexual assault during his confirmation hearings. None of them had any proof of their claims, and one has admitted she made up her lurid tale of a backseat rape as a “tactic” for the purpose of keeping Kavanaugh off of the Supreme Court. These claims were more lies to protect, among other things, the fake right to abortion on demand that they feared Kavanaugh would help overturn (which he did).

Heinous crimes like rape and incest should obviously be severely punished when they actually are proved to have happened (including in less than 2 out of every 100 abortion cases). But science and the Bible both establish that life begins at conception. The taking of any innocent human life is murder in 100 out of 100 cases!

“The radical left is sick,” my father, Trumpet editor in chief Gerald Flurry, wrote in “The Kavanaugh Hearings Reveal America’s Lawless Spirit.” “They do not accept criticism, and they are not sound-minded. The power behind them is very dangerous! What they are doing has the devil’s fingerprints all over it! Satan is ‘the spirit that now worketh in the children of disobedience’ (Ephesians 2:2). He loves to stir up nasty, unbridled emotion. Americans need to wake up! Satan is at work—dividing the country, turning us against each other, hollowing away the strength of our republic! Bible prophecy shows this is leading to nation-destroying violence!”

Jesus Christ said Satan is a liar and the father of the practice of lying. So much of the emotion he is stirring up today is the result of bold-faced lies. Norma McCorvey was never raped, Brett Kavanaugh is not a rapist, Roe v. Wade was always unconstitutional, and abortion is murder. But millions of Americans reject these basic facts, and thousands are willing to commit violence in the name of a lie.

You need to read my father’s new book, America Under Attack. No other book so powerfully documents the lawless spirit and its specific effects on this specific country in specific events over the past several years. Preorder a free copy now, and print off the online copy ahead of time, before your book arrives from the printer in August. You are experiencing the nation-transforming effects of this lying, lawless spirit. Now understand its cause.