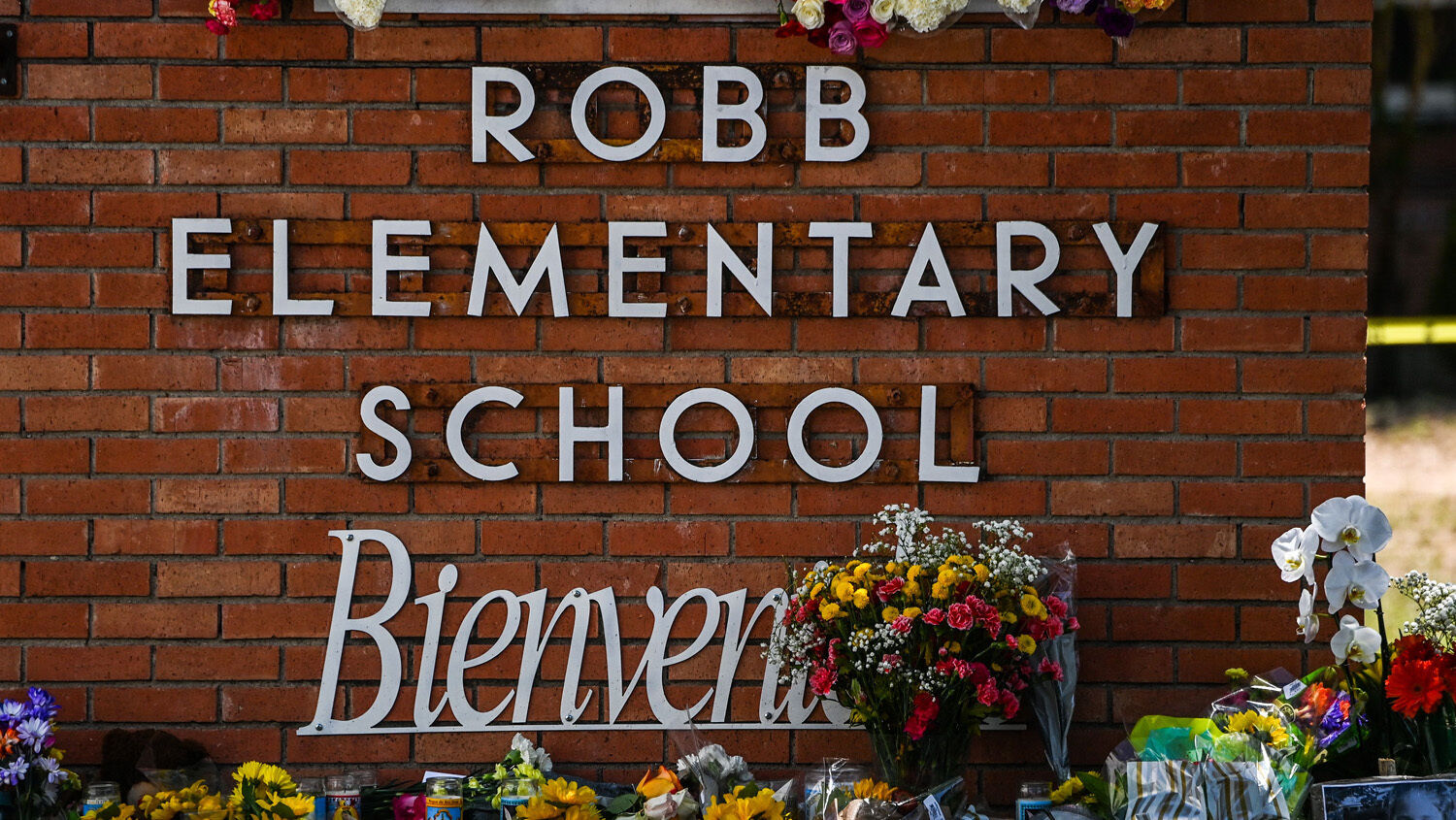 Flowers at a makeshift memorial in front of Robb Elementary School in Uvalde, Texas, on May 25
CHANDAN KHANNA/AFP via Getty Images

Systematic studies reveal that there is one common factor that almost all mass murderers have in common.

An 18-year-old opened fire in a Texas elementary school yesterday, murdering 19 children and two teachers. One of the worst things a parent can discover is something that has now happened to families across Uvalde, Texas.

But perhaps the worst thing a parent can discover is that he or she produced the monster who did this.

Details are continuing to emerge, but the murderer, Salvador Ramos, shot his grandmother before driving her vehicle to Robb Elementary School to murder more people. He abandoned the vehicle, apparently after crashing it in a large ditch, and continued to the school. Wearing a military-style vest and carrying one semiautomatic rifle, a handgun and extra ammunition, he entered the building and went into one classroom, murdering 21 people. Officers responded, some were lightly wounded, and a Border Patrol agent ended it by shooting and killing Ramos.

Ramos did not leave a manifesto, and law enforcement officials do not know why he decided to commit the second-deadliest school shooting in American history. But the answer is clearer and more troubling than we might like to think. It started at home.

Ramos was the son of Salvador Ramos Sr. and Adriana Ramos Martinez. Both have a criminal history. They separated when their son was young. Ramos Jr. lived with his mother after his parents separated but would often have screaming matches with her so intense that the police were called on several occasions. One report stated that he had physically attacked his mother with his fists multiple times. According to another report, he left or was kicked out when his mother discontinued Internet service at their house. He then lived with his grandparents.

Ramos’s grandfather, Ronald Reyes, spoke with reporters and said his grandson was quiet and stayed in his room a lot. Although Ramos posted to social media that he had purchased two semiautomatic rifles this month, his grandfather said he never knew it. He himself was a convicted felon, so it would have been illegal for him to have firearms in the house. No one, not even his family, monitored or intervened enough in this person’s life to keep him from becoming a monster.

They did not motivate this child. But someone did.

At times like this, those who say there is no spirit world, there are no demons, and there is no devil are proved very ignorant indeed.

The young Ramos, partially or entirely because of his weak, nonexistent family life, developed problems. He stuttered and spoke with a lisp and did not know how to get along with others. He was bullied. He eventually began wearing black, growing his hair long and even wearing eyeliner. Where did he turn? What did he do with all his time in his room? We may find out more, but one thing we know he turned to was violent video games.

In addition to his screaming matches with his mother, Ramos sometimes rode around at night firing a BB gun at random passersby and throwing eggs at cars. He should have attended classes at Uvalde High School, but his grandfather said he did not go most of last year. He was not on track to graduate. He did have a job at a fast-food restaurant, but co-workers told the Daily Beast he had an “aggressive streak” and sent inappropriate messages to female employees.

Yesterday, Ramos got into a dispute with his grandmother. Whether it was over his failure to graduate, over a telephone bill, or something else we do not know for sure, but we know what he did next.

The horror Uvalde parents are going through right now reminds us of Dec. 14, 2012, in Newtown, Connecticut, when another teenage boy, Adam Lanza, with major problems and major family problems, murdered 20 schoolchildren and six adults at Sandy Hook Elementary.

Political pundits on both sides have launched into their explanations. Radical liberals like former United States President Barack Obama are quick to say the problem is the gun. He blamed the “gun lobby and a political party that have shown no willingness to act in any way that might help prevent these tragedies.” Yet the percentage of Americans who own a firearm has been declining since the 1970s. So it is not an increasing prevalence of guns that is prompting people to shoot up schools. Many Americans remember growing up with some boys having rifles in racks in their trucks in the school parking lot.

It’s not the guns that have changed our society. It’s the people.

Mark Hemingway, a senior writer at RealClearInvestigations, noted on Twitter: “The fact is that there’s no big advances in firearm lethality compared to what citizens could own decades before we ever had regular mass shootings. I’m open to hearing about gun legislation, but it’s our culture that changed to enable this—not guns.”

We don’t know how to raise our children. That is why some of them, in extreme cases that are growing more and more frequent, end up murdering children.

Salvador Ramos Sr., Adriana Ramos Martinez, Ronald Reyes and Celia Martinez, who is in critical condition with a facial gunshot wound, did not raise Salvador Ramos Jr. to become this monster. But someone did. There is a spirit of hatred, murder and evil that is out there, that is on the video game console, that is streaming over Wi-Fi, that is after your children.

If we don’t know and act on and fight for the right spirit and the right way to raise our children, they are going to be raised by that spirit.

And that spirit is even worse now than it ever has been. If you go by statistics put out by the Stanford Geospatial Center’s Mass Shooting Database, this sea change began after something particularly dramatic happened in 1987.

“The tide turned in a big way in 1987,” my father, Trumpet editor in chief Gerald Flurry, writes in his booklet America Under Attack. “Law started to get a lot weaker. And lawlessness started to get much, much stronger. This is a significant clue as to what happened in 1986 that made such an impact on the state of our world.”

The Bible prophesies of a war in heaven where great angelic beings fought against Satan and his demons until God literally cast Satan down to Earth (Revelation 12:9-12). My father explains that this happened on Jan. 16, 1986, when the late Herbert W. Armstrong died. So the dramatic increase in lawlessness that happened after this event was due to the fact that Satan has been cast down and he knows his time is short. This is the real reason mass shootings have been increasing for the past 35 years. Demons prey on empty minds and societal problems like family breakdown, drug addiction and violent entertainment create such minds.

“I still don’t really understand what motivates people to do something like this,” said Fox News host Tucker Carlson last night. He asked Judge Jeanine Pirro if anybody had done a systematic study of what mass shooters have in common. Yet Pirro only told him that was a question for sociologists and psychologists. Most prosecutors do not want to answer questions like the one Carlson asked, but Brad Wilcox at the Institute for Family Studies has done such a systematic study.

“[A]s the nation seeks to make sense of these senseless shootings, we must also face the uncomfortable truth that turmoil at home all too often accounts for the turmoil we end up seeing spill onto our streets and schools,” he wrote after the Sandy Hook shooting, in a article titled “Sons of Divorce, School Shooters.” “The social scientific evidence about the connection between violence and broken homes could not be clearer.”

So while the percentage of Americans who own guns may have declined since Satan was cast down, the percentage of Americans who don’t have a stable family has gone up. And that is why there are more Adam Lanza and Salvador Ramos types now than there were when your grandparents were growing up with rifle cases on the bus for riflery class and hunting.

“There is cause and effect,” my father wrote in “The Real Solution to Mass Shootings and Violence.” “There is a cause for every problem. The cause of our violent and bloody crimes is that as a society we have rejected God’s law! … That law would bring peace and abundance to our society in every way. The more we transgress it, the worse our bloody crimes become.” The Texas elementary school shooting is proof of this statement. American society has abandoned God’s law, so Satan and his demons are exploiting the void to create a world where corrupted youth commit horrific crime after horrific crime. The Prophet Ezekiel said these bloody crimes would become like links in a chain, where one link leads right to the next and the next and the next (Ezekiel 7:23)

“Demons prey on empty minds! A mind not filled with God’s truth is fertile ground for these perverted spirit beings,” my father wrote in 2017 in “Charlottesville Violence—The Real Danger Is Invisible.” We have got to understand this now and stop believing this mass lie that the spirit world is a fantasy and that the only thing that’s real is physical matter and energy. There is a spirit dimension, a right spirit, a wrong spirit. That is where motivations, good or evil, come from.

“Demons are the hidden cause of our society’s many incurable problems,” my father continued. “They have far more power than humans do. The only way we can fight back is with God’s power.”

But if we forsake God, God does forsake us. That is the point Jesus Christ was making when He described a demon returning to a man’s mind and bringing seven other demons with him (Matthew 12:43-45).

Our society is unraveling because of our forsaking of family and the laws of family, because of our evil way of life. The only solution to our crime problem is God’s truth—which shows us how to raise happy, law-abiding children who do not commit grisly atrocities.

Fight for your family. Because someone and something else is fighting for them.