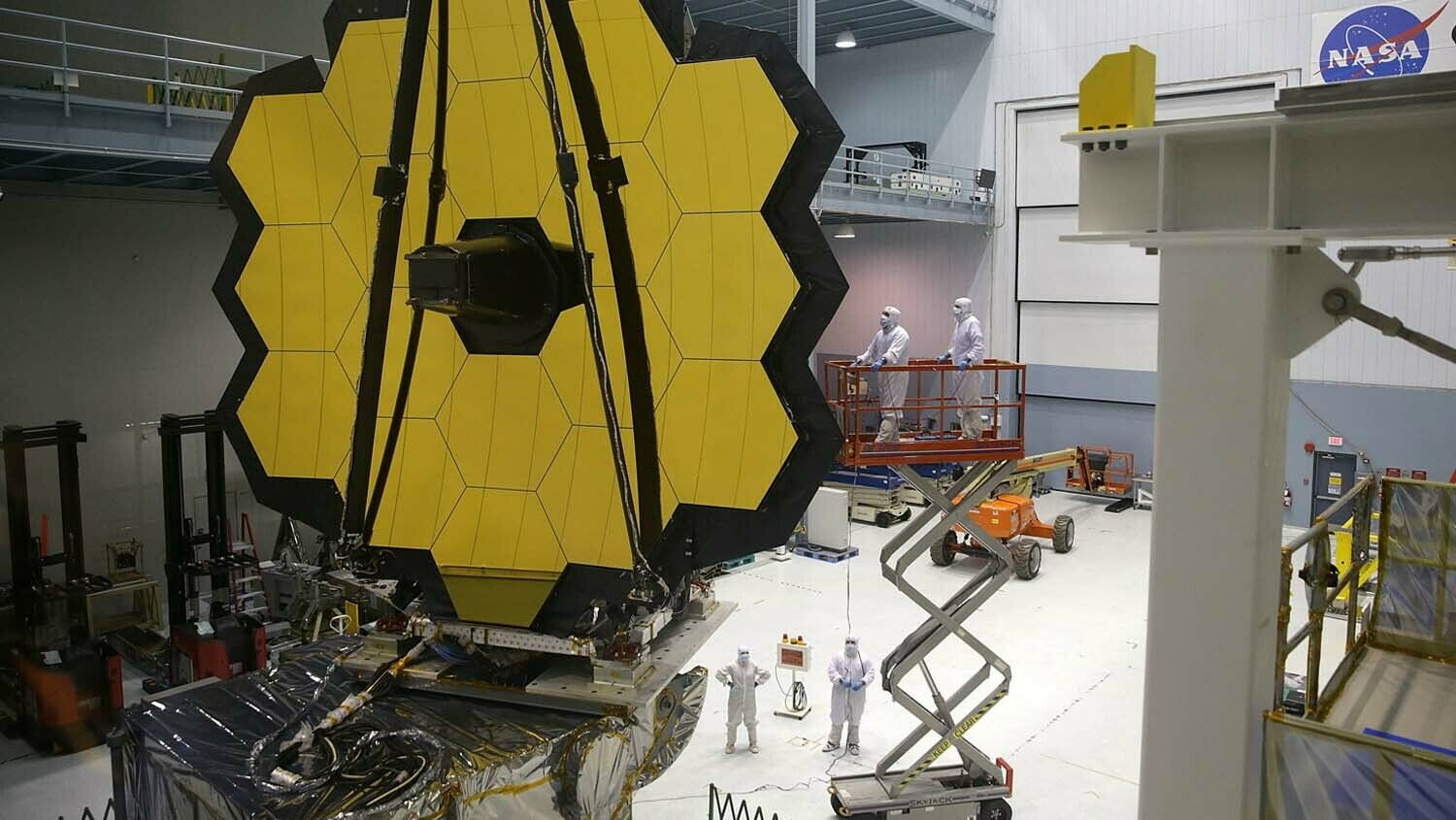 The James Webb Space Telescope could open a window into the heavens like never before.

While the corporate news media focus on omicron and the January 6 Commission, a satellite capable of seeing light from the very first stars is hurtling through space. Just today, the James Webb Space Telescope completed the most complicated aspect of its unfolding operation: fully deploying its massive five-layer sunshield. This cleared a huge hurdle on the telescope’s six-month journey to full operability. Now, 75 percent of the 344 potential single-point failures of this project have worked successfully. If all goes well, James Webb should start broadcasting images back to Earth by the end of June.

In the coming days, the telescope will begin unfolding its mirrors and instruments with six times the light-gathering capability of the Hubble Space Telescope. Because its main optics are infrared, it will be able to detect light from some of the first moments after creation.

“If the physical universe of matter, energy, space and time had a beginning—as observational astronomy and theoretical physics increasingly suggest—it becomes extremely difficult to conceive of any physical or materialistic cause for the origin of the universe,” Stephen Meyer, director of the Discovery Institute’s Center for Science and Culture, wrote in an editorial for the Federalist. “After all, it was matter and energy that first came into existence at the big bang. Before that, no matter or energy—no physics—would have yet existed that could have caused the universe to begin. Instead, whatever caused the universe to originate must not have been material and must exist beyond space and time. It must further have been capable of initiating a great change of state, from nothing to everything that exists” (emphasis added).

While humanity waits for the first images from the James Webb Space Telescope, it should take some time to reflect on what the Hubble Space Telescope has already revealed about God’s awesome universe. Some scientists believe that Hubble was the greatest development of the 20th century, and my father, Trumpet editor in chief Gerald Flurry, has said over the years that God had a hand in its launch (April 24, 1990) and success. During a 2009 Herbert W. Armstrong College commencement address, he said the images we’ve gained from Hubble should “set our imaginations on fire” and “fill a human being” with “real joy.”

Hubble provided us with evidence that light was the first thing in the universe and that the universe is expanding. Based on such discoveries, Tulane University cosmologist Frank Tipler noted, “Genesis tells us that there was a beginning and that after the beginning, light was the first created thing—exactly what modern astrophysics confirms.” Nobel laureate Arno Penzias said, “The best data we have are exactly what I would have predicted, had I nothing to go on but the five books of Moses, the Psalms, the Bible as a whole.”

There is clearly an Author of the cosmos. As my father pointed out in his Key of David program “Hubble Telescope and the Bible,” the images from this telescope are less for scientists, most of whom deny God’s existence, and are more for you and me. God wants us to see images that show us His power and greatness. He wants us to cheer for what those images clearly reveal about Him—like those scientists did in 1993 when that first Hubble image appeared on the screen, like they will hopefully cheer again this summer when the first Webb images appear on the screen. He wants to set our imaginations on fire.

That’s what the Hubble Space Telescope can do right now for you and for me. Romans 1:20 says that the creation around us reveals God, and the technology scientists have produced to reveal the visible universe is making it more and more obvious. The Prophet Isaiah, then Jesus Christ, told us to lift up our eyes and look to the heavens (Isaiah 40:26; Luke 21:28). It is interesting that the Hubble telescope was launched only 138 days after the establishment of the Philadelphia Church of God. God wants to show His people their future.

Now, 32 years later, God is preparing to give us an even greater view of the heavens. The James Webb telescope has passed the moon and won’t stop until it arrives at a special point 1 million miles out. There it will be dark enough to peer billions of years back in time. It will open a window into the heavens like nothing ever has before.

God intends that we study science and the stars.

The Jewish historian Josephus recorded that the study of astronomy originated in the family line of Adam’s son Seth. Other historians preserve a tradition that Noah established a college in ancient Armenia to teach not only religion but also astronomy. Abraham used astronomy to prove that the universe was rational and designed by one rational Creator. Job understood that the Earth hangs “upon nothing” (Job 26:7) and that the Pleiades was a star cluster bound together by a powerful force (Job 38:31). David spent many nights lifting up his eyes on high and pondering, “What is man, that thou art mindful of him?” (Psalm 8:4-6).

As Joel Hilliker noted last week, nasa administrator Bill Nelson referred to another one of King David’s psalms, where “he penned the words, The heavens declare the glory of God; the firmament shows his handiwork. That shepherd, that poet, became king. And those immortal words in Psalm 19 encapsulate the expressions that we have today—the handiwork of God.”

The Apostle Paul used David’s question to expound on God’s plan for the universe. In Hebrews 2:6-9 he wrote, “But one in a certain place testified, saying, What is man, that thou art mindful of him? or the son of man that thou visitest him? Thou madest him a little lower than the angels; thou crownedst him with glory and honour, and didst set him over the works of thy hands: Thou hast put all things in subjection under his feet. For in that he put all in subjection under him, he left nothing that is not put under him. But now we see not yet all things put under him. But we see Jesus, who was made a little lower than the angels for the suffering of death, crowned with glory and honour; that he by the grace of God should taste death for every man.”

This passage shows that God created the entire universe to put under mankind’s subjection. But first, human beings must achieve the purpose for which they were created: to be born into God’s Family. Seth, Noah, Abraham, Job, David, Paul—and you, when you have looked up at the night sky—were surveying the future domains of humanity!

In E = MC2, a biography about Albert Einstein, author David Bodanis writes, “We’re used to science being separated from religion, but in the 17th and 18th centuries it wasn’t.” Sir Isaac Newton wrote papers about his religious beliefs (including about his belief that an end-time Elijah would preach the gospel in every nation before Christ’s return). Newton endorsed a literal interpretation of the Bible and was a famous scientist.

Michael Faraday was an English scientist from the early 1800s who specialized in electromagnetism and electrochemistry. He was one of the most influential scientists in history. He invented the basis for the electric engine. He was also a deeply religious man who regularly turned to the Bible for inspiration.

James Clerk Maxwell was a Scottish mathematician, and he was deeply religious as well. These famous scientists of old were motivated to study and research by a desire to understand the God behind the universe. These were scholars who didn’t understand God’s truth, but accepted that God was Creator. At least they acknowledged that the material universe is God’s creation. At least they acknowledged that the heavens declare God’s glory, as Psalm 19:1 says. What a difference when you compare them to most scientists today.

The James Webb Space Telescope, and many other modern scientific instruments, are making it easier to discern God’s message. On one hand, we can look into the smallest of cell structures under high-power microscopes, and on the other hand, we can view the farthest reaches of the observable universe. And still, the world rejects God and His creative power. But all of these inventions only prove over and over again that there is a great Creator God behind the universe. Scientists don’t believe it, but the evidence is visible in each of the 1.3 million observations that Hubble has made since its mission began. God had a hand in the Hubble Space Telescope because it reveals His power and might—and our awesome universe potential. And He will likely have a strong hand in the James Webb Space Telescope for the exact same reason! Keep watching this fascinating instrument as it unfolds.