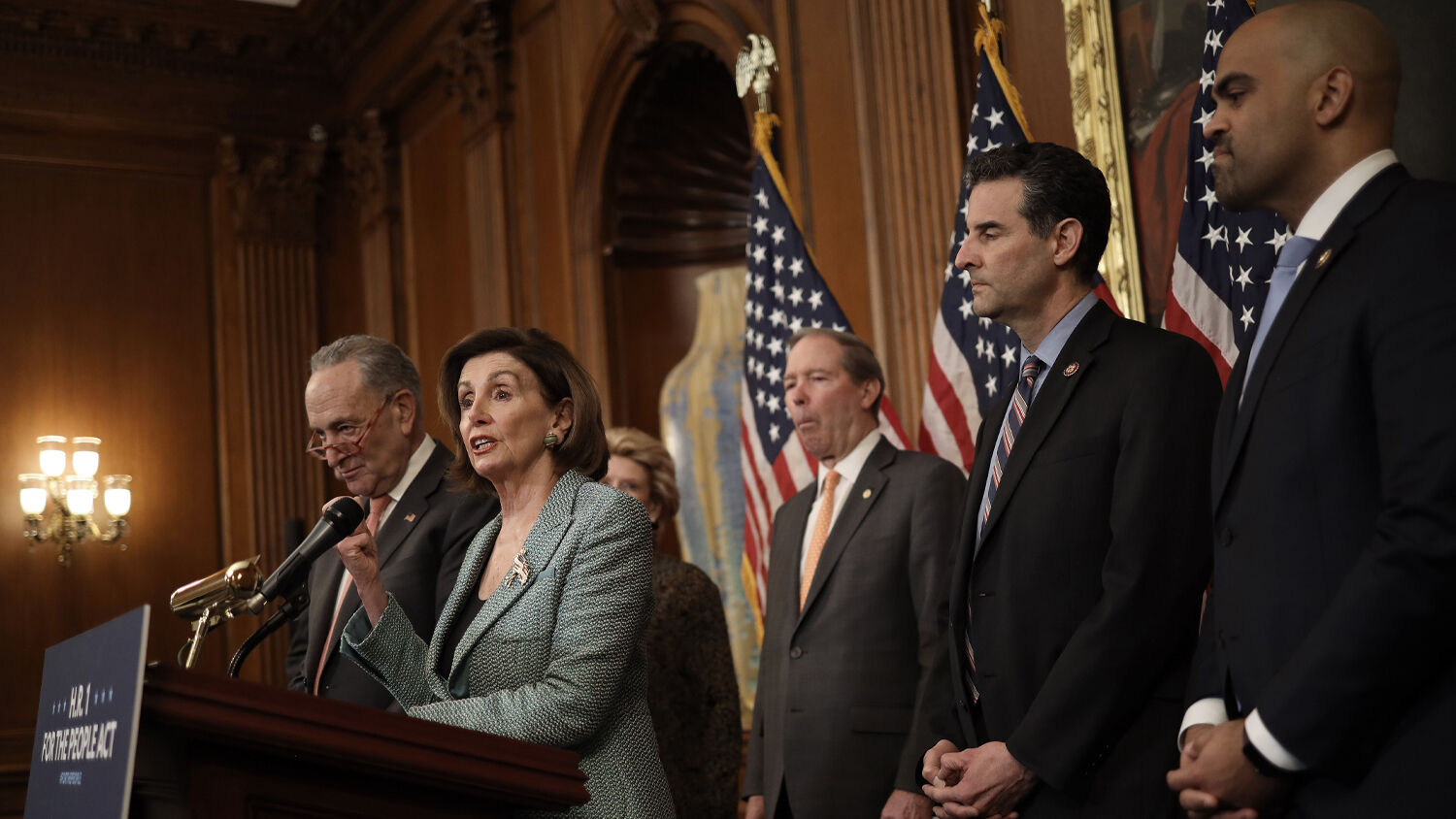 U.S. Speaker of the House Nancy Pelosi and Senate Minority Leader Chuck Schumer (D-NY) speak at a press conference with members of the House and the Senate.
Win McNamee/Getty Images

‘We are getting a hard look at just what the radical left is willing to do in order to seize power and stay in power.’

Radical Democrats are now trying to pass H.R. 1, which they want to call the “For the People Act.” It is one of the most extreme and lawless voter reform bills in history!

Read a summary of the provisions of this bill. It would essentially legalize the fraud committed during the 2020 United States presidential election, making it possible for radical Democrats to “lawfully” steal every future American election. This is unbelievably bold: They are daring anyone to try to stop them.

The Democrat Party-controlled House of Representatives passed this bill a couple of years ago, but the Republican Party controlled the Senate and did not vote on it. But now the Senate is tied, and Kamala Harris gives Democrats a de facto Senate majority. So if Democrats can get rid of the filibuster, they can turn the For the People Act into actual law.

To call the H.R. 1 bill unconstitutional would be an egregious understatement.

The United States Constitution, the supreme law of the land, states, “Each state shall appoint, in such manner as the legislature thereof may direct, a number of electors, equal to the whole number of senators and representatives to which the state may be entitled in the Congress: but no senator or representative, or person holding an office of trust or profit under the United States, shall be appointed an elector.” This guarantees each state the right to set election standards, not the federal government.

Yet Speaker of the House Nancy Pelosi is moving to force states to accept election standards engineered not only by the federal government but by socialist politicians. “Are you familiar with H.R.1: For the People Act of 2021?” wrote one retired police chief in Law Enforcement Today. “If you’re not you should be. The act would be better named ‘H.R.1: For Making Sure Republicans Never Win Another National Election Act of 2021. This bill, if passed, will fundamentally change how America conducts elections. Actually what it will do in part is codify the apparent massive irregularities that occurred in the 2020 election.”

Here are the highlights that the bill’s sponsor, Rep. John P. Sarbanes, is proposing we do to our electoral system.

The For the People Act requires states to make Internet-only voting registration with electronic signature registration available to all eligible voters so that people can register to vote without leaving their homes. Even though this obviously opens the door to people falsifying names and committing electronic voter registration fraud.

The bill also bans the requirement to provide a full Social Security Number for voter registration. Not having to provide proof that you are eligible to vote, that you are alive or that you are real will make it easier for not just illegal aliens and felons to vote but also for people to use the identities of dead people and fictitious people to multiply their votes.

The bill also mandates that states must provide “motor voter registration” policies that require motor vehicle registration offices to provide voter registration services. These policies are a primary reason illegal aliens in California and Nevada have been able to vote, even though the Constitution states that only American citizens can vote for American representatives.

The bill mandates that 16-year-olds and convicted felons be allowed to vote, and prohibits states from even trying to purge their voter rolls of foreign nationals, who, again, are ineligible to vote according to the Constitution. It mandates same-day voter registration, mandatory early voting, nationwide availability of mail-in ballots and unlimited ballot harvesting.

This is the antithesis of a “free and fair” election. America and other First World nations send monitors to the elections held by other nations to make sure that the national leaders don’t interfere with each eligible voter’s right to vote. Yet look at what this bill would do to America’s own elections!

No other First World nation would implement such a series of radical measures. Out of 27 European Union countries, 17 ban mail-in voting except in rare cases. They know the terrible potential for voter fraud. Yet radical Democrats are trying to force all 50 states to send mail-in ballots to every person in America, no matter who they are, how they got here, or whether they are eligible to vote.

How else can you describe this bill but as a direct attack on America’s constitutional republic?

After pretending for decades that their agenda is more moderate than it actually is, the radical leftists are taking off their masks and letting the nation see who they really are!

“We are getting a hard look at just what the radical left is willing to do in order to seize power and stay in power,” my father wrote in “Saving America From the Radical Left—Temporarily.”

They have no respect for the rule of law! They believe they are above the law. It is no exaggeration to say that such contempt for the nation’s founding principles is a threat to the republic! God has blessed America like no other nation. And the devil wants to destroy America like no other nation! As I prove in my free booklet America Under Attack, Satan is marshaling every tool and weapon he can to wreck this nation, and he is having alarming success! This evil spiritual power is influencing the radical left!

This “For the People Act” is so extreme that if God did not step in to save America from the radical left temporarily, they would be able to “legally” rig every election for the foreseeable future. They would remain in power for lifetimes—for centuries.