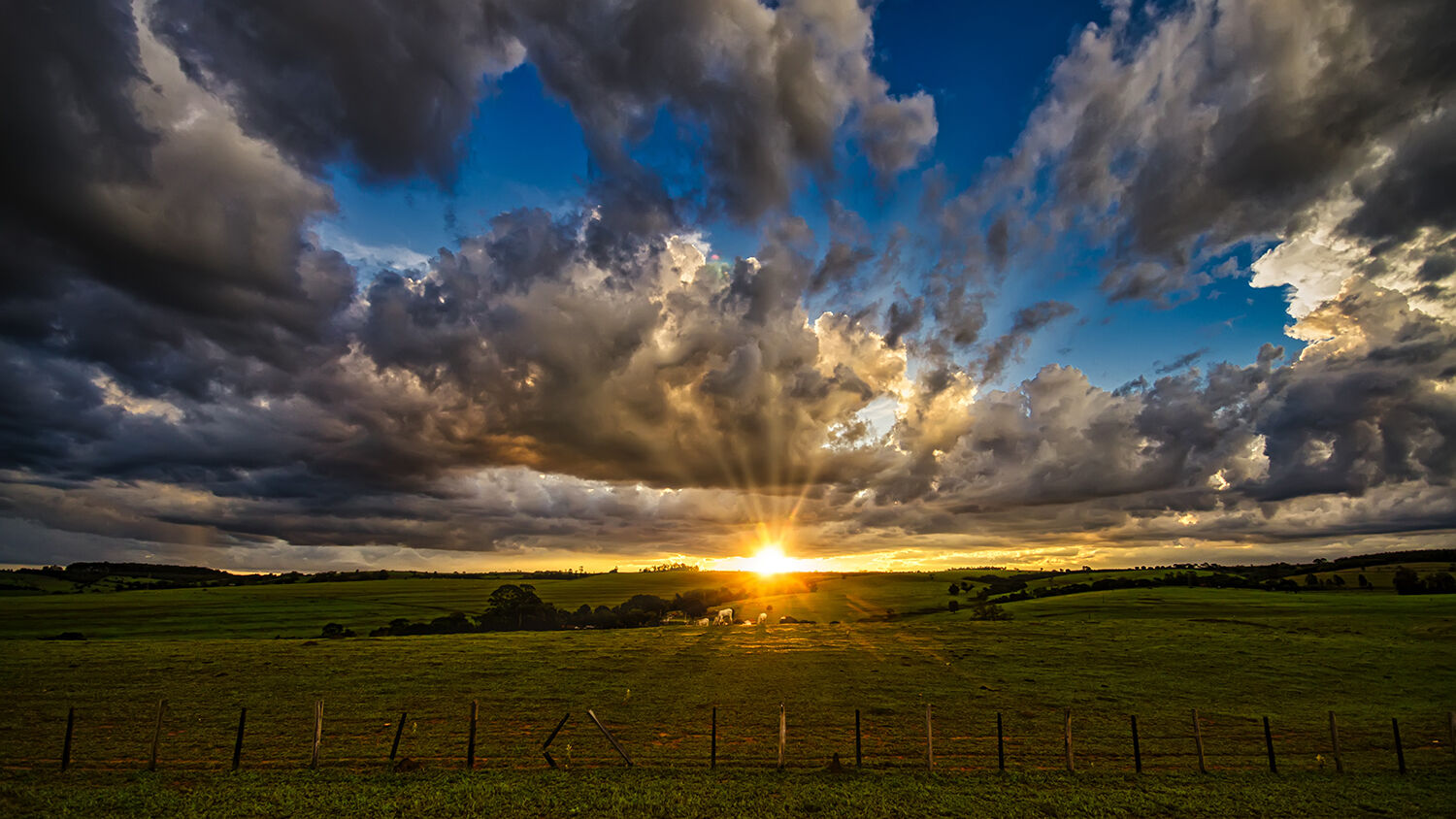 Many Christians have strong beliefs about the Second Coming of Jesus Christ. However, they don’t talk as much about what will happen after He returns. But the Bible tells you what is in store during and after the greatest event in human history.

There are actually dozens of clear, detailed Bible prophecies showing that, after Christ returns, a 1,000-year period will occur, during which He will rule the Earth with the saints. Many Christians downplay this millennium or regard it as being “spiritual” but not literal.

What is the Millennium? Is there really a prophesied time of worldwide peace and prosperity just around the corner? Will Jesus Christ really return to Earth to set up a world-ruling government? The answers to these questions are plainly revealed in your Bible.

Read the writings of historians and theologians from the first few centuries after Christ’s death and resurrection, and you will see that they were generally aware of His future 1,000-year reign on Earth. Papias of Hierapolis taught in the second century a.d. that “there would be a certain millennium after the resurrection, and that there would be a corporeal reign of Christ on this very Earth,” according to the famous historian Eusebius’s Ecclesiastical Histories (emphasis added).

Irenaeus, the bishop of Lyons, wrote in the second century a.d.: “For in as many days as this world was made, in so many thousand years it reaches its consummation.” He identified several Old Testament passages that refer to the Millennium, then continued: “All such things refer not to heavenly matters but to the time of the kingdom, when the Earth has been restored by Jesus Christ.”

These men took the many biblical prophecies and statements about the Millennium literally. They did not think that this Kingdom of God was set up only “in your heart.” They understood it to be the literal reign of Jesus Christ on Earth, a government just as real as ancient Israel, the Roman Empire or the United States. Today, however, that general understanding of the Millennium has been lost.

What is the truth?

First, understand that this is not God’s world. The god of this world is actually Satan the devil (2 Corinthians 4:4). He has deceived the entire world through his powerful broadcast as the prince of the power of the air (Revelation 12:9; Ephesians 2:2).

Revelation 20:1-3 prophesy that after Jesus Christ’s return, Satan and his demons will be bound for a thousand years: “And I saw an angel come down from heaven, having the key of the bottomless pit and a great chain in his hand. And he laid hold on the dragon, that old serpent, which is the Devil, and Satan, and bound him a thousand years, And cast him into the bottomless pit, and shut him up, and set a seal upon him, that he should deceive the nations no more, till the thousand years should be fulfilled: and after that he must be loosed a little season.”

This shows that after Christ takes the throne of the Earth from Satan, he will be restrained, no longer able to deceive the nations, for a thousand years. That tells us that the Millennium is a future event, because the world right now is clearly still heavily influenced by Satan. When that evil spirit influence is removed, however, everyone will have the opportunity to receive the wonderful truth that God reveals in the Bible. Everyone will finally have the opportunity to learn the way to true happiness. “[T]he earth shall be full of the knowledge of the Lord, as the waters cover the sea” (Isaiah 11:9). This is the time of “refreshing” and the “restitution of all things” prophesied in Acts 3:19-21.

In the fourth century a.d., the Catholic Church removed the book of Revelation from its general reading list. Encyclopedia Britannica (11th edition) comments: “Thus the troublesome foundation on which [the teaching of the Millennium] might have continued to build was got rid of.”

Edward Gibbon wrote in The Decline and Fall of the Roman Empire: “The doctrine of Christ’s reign upon Earth … was considered by degrees as a doubtful and useless opinion, and was at length rejected as the absurd invention of heresy and fanaticism.”

The Catholic Church began to look on the Roman Empire as the fulfillment of the Kingdom of God. It erased the teaching of a future kingdom to be established by Christ at His return. Today, the pope of the church in Rome is called the vicar of Christ—in place of Christ. Many in Catholicism and the churches that derived from Catholicism believe that Christ’s millennial reign has already begun in some way. However, Revelation 20 clearly shows that the Millennium cannot begin until after Satan has been removed and bound.

Today, we are so far removed from the truth about the Millennium that many Christians don’t believe this doctrine is even taught in the New Testament. But note this in John 7:8: Jesus Christ encouraged His disciples and His family to go and keep the Feast of Tabernacles. “But when his brethren were gone up, then went he also up unto the feast, not openly, but as it were in secret. Then the Jews sought him at the feast, and said, Where is he? … Now about the midst of the feast Jesus went up into the temple, and taught” (verses 10-11, 14).

Jesus Christ set this example for us: Even at the peril of His life, He kept the Feast of Tabernacles so that we might follow in His steps (1 Peter 2:21).

Why keep the Feast of Tabernacles? To understand the truth about the Millennium!

The Feast of Tabernacles is the sixth of seven annual festivals that God commands His people to observe every year. This weeklong fall festival occurs in September or October. Deuteronomy 16:14 shows that during the Feast of Tabernacles, God wanted the ancient Israelites to overflow with joyfulness, thanksgiving and rejoicing. God even commanded the Israelites to save a tenth of their income throughout the year for use at this festival to help them rejoice. Deuteronomy 14:23 gives the purpose of the Feast and its abundance: “[T]hat thou mayest learn to fear the Lord thy God always.” This Feast pictures a time of physical abundance, when the whole world will enjoy the fruits of obeying God’s law.

Exodus 23:16 calls the Feast of Tabernacles a “feast of ingathering.” God’s plan of salvation is typed by the two annual harvests in ancient Israel: the small spring harvest of the firstfruits of the crops, and the much larger fall harvest. These harvests type God’s time order for harvesting human beings into His Family: First, He is gathering in a small harvest of firstfruits—the Church, which is being prepared and trained so they might rule with Christ in the Millennium and beyond. Then, God will gather in the great fall harvest, when all who have ever lived will be given a chance to be part of God’s Family. The Feast of Tabernacles pictures that future ingathering of Spirit-begotten humans who will be brought into the Family of God during the 1,000-year reign of Christ.

The Feast of Tabernacles pictures a time when God’s Family will be enlarged. That is why Christ observed this festival when He was on Earth—because He understood what it pictured, even if the Jews did not.

Zechariah 14 shows that when Christ returns, mankind will try to fight Him, but He will forcefully put down all rebellion. Mankind will be forced to be happy—to live the way of God, which brings real happiness into our lives. At that time, “living waters shall go out from Jerusalem; half of them toward the former sea, and half of them toward the hinder sea: in summer and in winter shall it be. And the Lord shall be king over all the earth: in that day shall there be one Lord, and his name one” (verses 8-9). God’s law will flow out from Jerusalem (Isaiah 2:3), and this city will become the joy of the whole Earth (Psalm 48:2).

Zechariah 14:16 shows that in the Millennium, everyone will keep the Feast of Tabernacles: “And it shall come to pass, that every one that is left of all the nations which came against Jerusalem shall even go up from year to year to worship the King, the Lord of hosts, and to keep the feast of tabernacles.”

Talk about a feast of ingathering! This foretells a time when all mankind—Israelites and Gentiles alike—will be keeping the Feast of Tabernacles in Jerusalem. All mankind will be obeying God’s law and keeping His annual holy days!

After putting down the initial rebellion, Christ will begin a massive project of reeducation. Much of that reeducation will center around these seven annual festivals, which picture God’s master plan for mankind. God commanded for these festivals to be observed forever. That is why Christ risked His life to keep them when He was on Earth—because He knew that these holy days pictured a time when all mankind would be brought into the Family of God. In this soon-coming Kingdom of God, everyone will have access to God’s truth and will be able to learn the way to true happiness. The truth of God will cover the Earth like the waters cover the ocean beds! (see Isaiah 11).

Zechariah 14:17-19 show what will happen to those who refuse to keep the Feast of Tabernacles. They will experience curses from God such as drought until they change their attitudes. What more proof do we need that God always intends for us to keep these days?

Herbert W. Armstrong wrote in Mystery of the Ages:

Now 6,000 years of human experience have brought mankind to the very brink of world suicide.

So, in other words, the first 6,000 years of God’s 7,000-year plan were allotted to allow Satan to labor at his work of deceiving the world, followed by 1,000 years (one millennial day) when Satan shall not be allowed to do any of his “work” of deception. Put another way, God marked out six millennial days to allow man to indulge in the spiritual labor of sin, followed by a millennium of spiritual rest, under the enforced government of God.

What a beautiful vision! Once mankind submits to God’s law in the Millennium, all people living will be able to enjoy the truly happy way of life. What a wonderful time that will be!

To learn more about what will happen on Earth during the Millennium, please request our free booklet The Wonderful World Tomorrow—What It Will Be Like. This booklet will give you a beautiful vision of this coming world—a wonderful hope to hold on to in the close of this age.