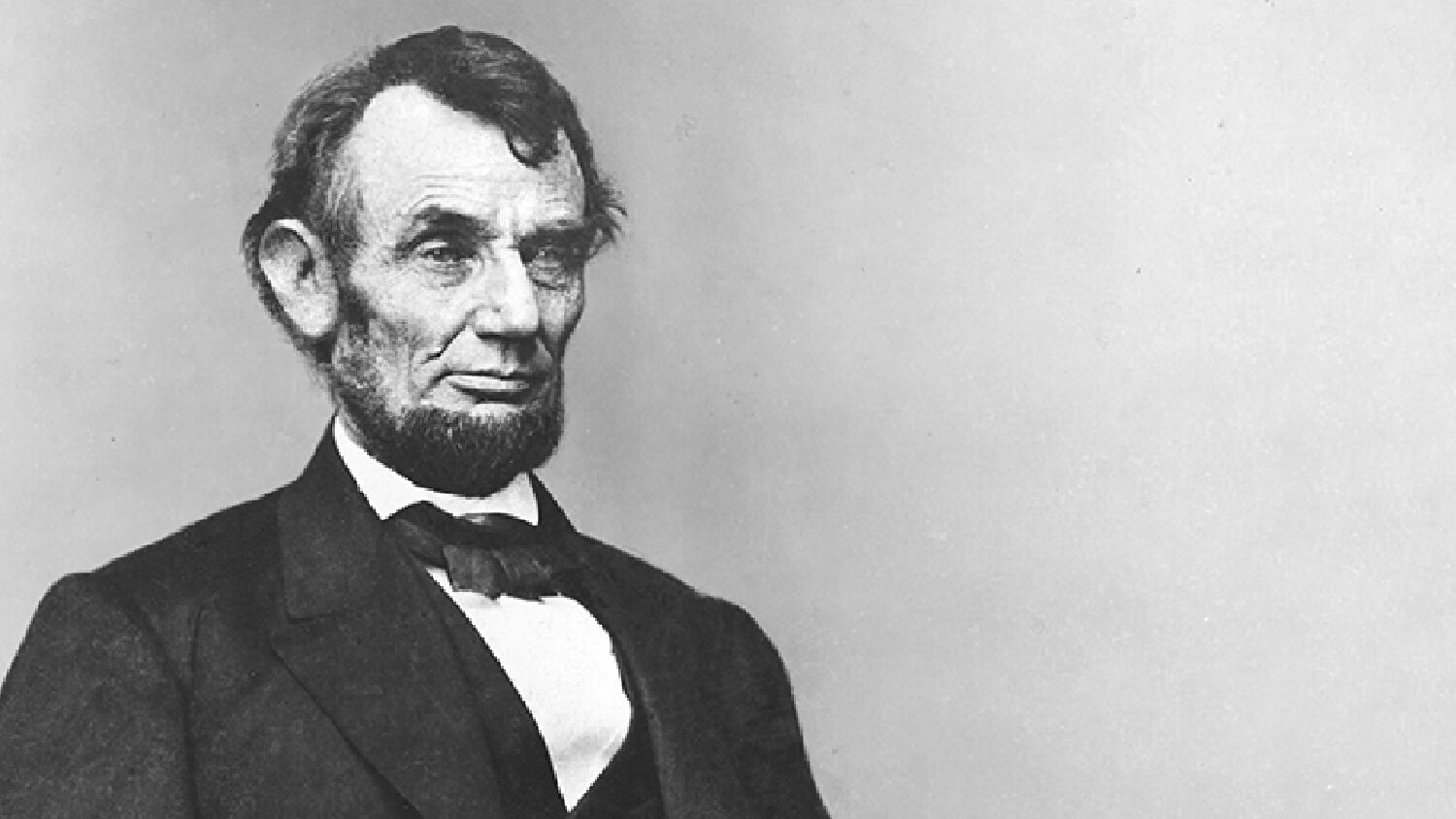 ‘The best gift God has given to man’

“A house divided against itself cannot stand.”

This well-known quote is commonly attributed to Abraham Lincoln, one of America’s most famous presidents. But did you know that Lincoln was actually quoting the Bible? (Matthew 12:25).

Abraham Lincoln was a reader throughout his life: Aesop’s Fables, The Autobiography of Benjamin Franklin, Blackstone’s Commentaries on the Laws of England, Decline and Fall of the Roman Empire, Euclid, Plutarch, Henry Clay, Edgar Allen Poe, Robert Burns, William Shakespeare. But one of the books he studied the most was the Holy Bible. He had large portions of it memorized, and it influenced his thoughts, his private conversations, his public speeches and how he lived his life.

Despite Lincoln’s obvious familiarity with the Bible, scholars debate whether or not he was religious. He didn’t attend regular church services. As a young man, he was known as the “village atheist.”

Lincoln owned several Bibles. When he received one of them as a gift, he said: “In regard to this Great Book, I have but to say, it is the best gift God has given to man. All the good the Savior gave to the world was communicated through this book. But for it, we could not know right from wrong. All things most desirable for man’s welfare, here and hereafter, are to be found portrayed in it.”

Miner also said that Lincoln intended to visit Jerusalem once he left office, to “see those places hallowed by the footsteps of the Savior.” Sadly, the president never got that opportunity: He was assassinated on April 14, 1865.

Scholars think that because Lincoln did not attend services, he must have been irreligious. I wonder if perhaps he didn’t attend regular services because he knew the Bible better than those preachers did! He was known to carry a copy of the New Testament with him. He studied daily. If you truly study the Bible, you realize pretty quickly that what mainstream Christianity teaches is simply unbiblical.

The Lehrman Institute writes this about Lincoln’s relationship with the Bible:

Mr. Lincoln’s deep knowledge of the Scriptures could not have come without regularly reading them. As Lincoln scholar Paul Angle noted: “There was one book … which left its mark on much of what he wrote. That was the Bible. Upon a familiarity which extended back to his youth he could always depend.” …

For Mr. Lincoln, the Bible brought him a lifetime of education.

The Bible was a foundationally important book to nearly all of the Founding Fathers—George Washington, John Adams, Thomas Jefferson, James Madison, Samuel Adams, Patrick Henry, John Jay, etc. The greatest leaders in American history have been strong believers in the Bible and biblical morality. There is a very good reason why applying the principles in the Bible helps an individual become a success!

Knowledge of the Bible used to be far more common. In Lincoln’s day, children were taught from the Bible in school. Lincoln had little formal education as a young man, but the education he received in the classroom and on his own in between chores or at night by candlelight was grounded and rooted in the Bible. The Lincoln family didn’t have a Bible in the house until young Abe was 10, but all his school reading exercises were from the Bible. With no other books to read from, the children stood in a line and read from the Bible.

The Lehrman Institute recounts several examples of Lincoln’s extensive knowledge of the Bible. When John C. Frémont was nominated for president in 1864, only 400 people showed up for the nomination convention. When Lincoln heard of this, he turned to 1 Samuel 22:2, which contains the account of David on the run from Saul: “And everyone that was in distress, and everyone that was in debt, and everyone that was discontented, gathered themselves unto him; and he became a captain over them; and there were with him about four hundred men.” Clarence Edward Macartney wrote in Lincoln and the Bible, “Thus the president used his knowledge of the Bible to describe and ridicule the critics, complainers and malcontents who had gathered about Frémont.”

At that time, quoting Scripture was something politicians needed to be able to do well. Lincoln loved to quote the Bible. He said that “the Bible is the richest source of pertinent quotations.”

Why won’t more people read and study the Bible like this famous president did? Why won’t they look into it to learn these important maxims to live by?

Lincoln’s speeches were full of biblical references and quotes. His famous “house divided” analogy from a speech in 1858 is right out of the Bible. In his first inaugural address, he referenced the blessings America had received from God, advocating “a firm reliance on Him who has never yet forsaken this favored land.”

In Lincoln’s first annual message to Congress, he said, “With a reliance on Providence all the more firm and earnest, let us proceed in the great task which events have devolved upon us.” In his second inaugural address, he said that the “judgments of the Lord are true and righteous altogether.” In his famous Gettysburg Address, Lincoln stated that this “nation shall under God have a new birth of freedom.”

Lincoln biographer William E. Barton wrote that Lincoln “read the Bible, honored it, quoted it freely, and it became so much a part of him as visibly and permanently to give shape to his literary style and to his habits of thought.”

The Bible directly influenced how Abraham Lincoln thought! He read many, many books in his life, but his entire way of thinking was grounded in the most unique book of all.

In his autobiography, Herbert W. Armstrong quoted his Uncle Frank as saying: “Education comes from study—from books—from lectures—from contacts—from travel—from thinking about what you see and hear and read—and from experience.” If you read and study with the Bible as your foundation, it will positively influence your thinking. If you want to be truly educated, you must study this divine instruction manual!

We should be able to quote the Bible like Lincoln did and apply it to everyday situations. God is a practical God, and He sent us an instruction book to show us how to live. What does it show God if we neglect this most important manual for human life?

The Bible tells us to judge by fruits (Matthew 12:33-36). It also tells us that “out of the abundance of the heart the mouth speaketh” (verse 34). We will speak about what we fill our minds with. Look at Abraham Lincoln’s speeches. He filled his mind with the Bible, and out of that abundance, his mouth spoke.

Paul told Timothy to be an example to the Church and to “give attendance to reading” (1 Timothy 4:13). I have used that verse many times at Herbert W. Armstrong College to encourage our students to devote themselves to study and to be noble in their Bible study like the Bereans. Herbert W. Armstrong set a great example in this—he studied the Bible every single day, right up to the end of his life.

In The Art of Thinking, French philosopher Ernest Dimnet wrote: “Do not read good books—life is too short for that—only read the best.” If you fill your mind with the right content, then you will develop higher quality thinking. He also wrote, “Parents anxious to give their children the best of everything should as resolutely pack away trash of all kinds from their reach as if it were poison.” We are so concerned about keeping our children out of harm’s way physically. What about protecting their minds from trash and instead filling them with quality?

Look at the impact that this one, most important book had on Abraham Lincoln. He was probably one of the most biblically literate presidents in United States history. Although he did not have God’s Holy Spirit and did not fully understand what he was reading, he read and studied his Bible regularly, and he used it. Doing the same will help you achieve success, even greatness, in this life, because you will be following the instructions of the Creator who made you and who has revealed what to do to live successfully.

But you can understand even more about the Bible than the great Abraham Lincoln. And you can achieve greatness that he never knew existed. He turned his powerful, inquisitive, deductive mind to the Bible, and found several of the keys to life. But God intentionally kept the master keys hidden. However, those few whom He calls can find those keys and unlock the full meaning of history’s most incredible book.

If you want to unlock your Bible, read Mystery of the Ages, by Herbert W. Armstrong. This book addresses the seven great fundamental mysteries of human life—mysteries that Lincoln and other great minds have craved to know, mysteries that even Christian religions have not explained. What is God? Do angels and demons exist? What is man? How did civilization begin? Why is Israel important to God? What is the Church? What is the Kingdom of God? Open up this “Great Book” each day, like Lincoln did. Open up Mystery of the Ages next to it, like he couldn’t. Find all the keys that lead to success and greatness, in this life and beyond. Unlock the best gift God has given to man.