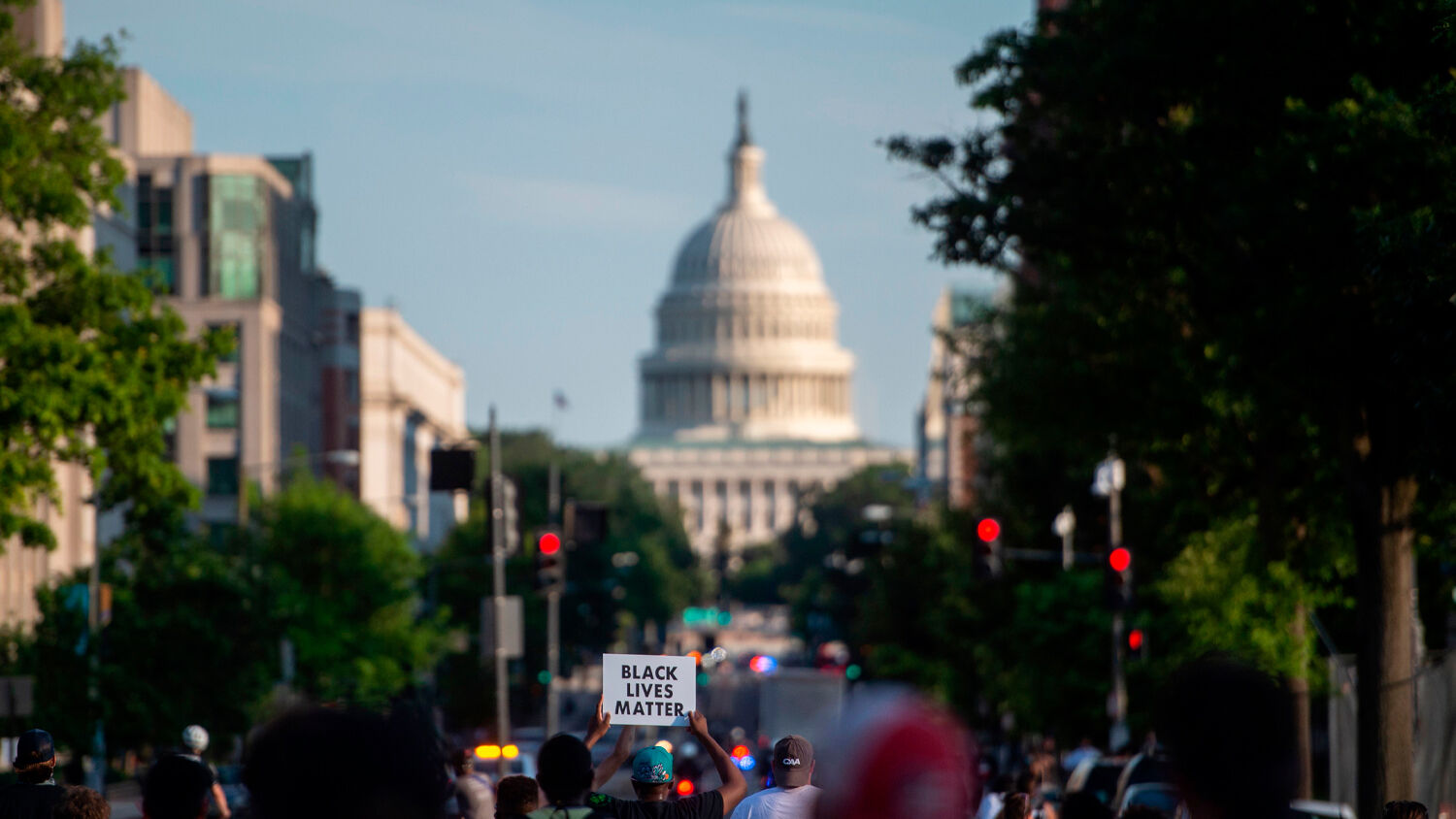 Black Lives Matter protesters march through the streets near the U.S. Capitol in Washington, D.C. on June 24, 2020.
ANDREW CABALLERO-REYNOLDS/AFP/Getty Images

What we just glimpsed in our nation’s capital

washington, d.c.
Our group of 18 newly graduated high schoolers and six adults is visiting our nation’s capital. Last Friday we took the public metro bus to the National Arboretum. And we weren’t welcome.

We were white, and every other passenger was black. Several were visibly disgruntled. At a few stops, people boarded, looked at us, cursed, turned around and got back off the bus.

I tried to show myself friendly. A man, perhaps 65 years old, was wearing a Washington Redskins facemask. “That’s a vintage mask,” I said. “You like the Redskins?” “Yeah,” he said. “Where are you from?” I explained that we were a school group from Oklahoma.

“Do you live near Tucson?” he asked.

“Tucson is in Arizona,” I responded. “Do you mean Tulsa?”

“Yeah—Tulsa. Do you know about the massacre there?” When I said yes but that I didn’t know much detail, his agitation boiled over. He gave me this summary of the Tulsa Race Massacre of 1921: “All the black businessmen were killed by you white folks.” He then looked straight ahead, seething in silence, our conversation over.

That tragedy only came into broad public consciousness last June, when Donald Trump held a political rally in Tulsa and people perceived it as a “dog whistle” to white supremacists. Those who accuse America of being a racist nation say that delving into such history is important for us to heal racially. In this case, it led to a tense exchange on a public bus that only seemed to confirm in a black man’s mind his irreconcilable estrangement from white people. I don’t know what all he was thinking, but I couldn’t help feeling he somehow held me responsible for events 1,200 miles and 100 years removed from us.

As we saw firsthand, America’s race problem is serious, and getting worse.

Americans are worried about race. In 2019, Pew Research said about half of blacks said that being black hurt their ability to get ahead. A poll from last year found that 3 out of 4 respondents said racial discrimination is a big problem in the United States—up from 1 in 4 just five years earlier. Around the same time, Gallup said that less than half of white and black adults thought race relations were very good or somewhat good.

With all the negativity, misunderstanding, deceit, resentment, accusation and hatred flying around, you have to turn to something greater, something truer for the right perspective, for sanity, for hope.

You will find that in the Bible.

Here is a one-verse summary of much of the Bible’s contents: “Therefore all things whatsoever ye would that men should do to you, do ye even so to them: for this is the law and the prophets” (Matthew 7:12).

Throughout the Bible, both Old Testament and New, God’s command is consistent: “As we have therefore opportunity, let us do good unto all men …. [T]he servant of the Lord must … be gentle unto all men …. Follow peace with all men …. Honour all men” (Galatians 6:10; 2 Timothy 2:24; Hebrews 12:14; 1 Peter 2:17). A man who oppresses another violates God’s spiritual law. That law is as real as the laws of genetics and the laws of physics. It comes from the same God. Whoever you are, whichever “side” you are on of whatever issue, this is the truth.

Confusion and hate results when people reject obedience to that God or even acknowledging that God. This makes them easy prey for “the god of this world”: Satan (2 Corinthians 4:4). Satan is real, and he excels at appearing to seek justice when he is really seeking destruction.

“But the tongue can no man tame; it is an unruly evil, full of deadly poison. Therewith bless we God, even the Father; and therewith curse we men, which are made after the similitude of God” (James 3:8-9). Across our society, people who claim to be righteous are cursing other people. And poisonous words eventually lead to poisonous actions.

Are you allowing hate to enter your heart?

“Out of the same mouth proceedeth blessing and cursing. My brethren, these things ought not so to be” (verse 10).

Think about this in terms of “justice” being sought in this world. “Doth a fountain send forth at the same place sweet water and bitter? Can the fig tree, my brethren, bear olive berries? either a vine, figs? so can no fountain both yield salt water and fresh” (verses 11-12).

America faced similar racial tensions in 1968. Plain Truth editor in chief Herbert W. Armstrong gave some Bible-based clarity. He wrote that news and entertainment aimed at African-Americans intrinsically “implies race consciousness—and race consciousness, due to the pull of human nature, tends naturally to create and increase racial prejudice.” He pointed out the policy of news executives “to treat the hate-mongering verbal outbreaks of men like Stokely Carmichael, and H. Rap Brown as legitimate news. A rabble-rouser can pour forth a volley of verbal vituperation and hate, advocating violence, and these news media give him hundreds of thousands of dollars’ worth of free time. Yet they would refuse even to sell time to many programs—such as a religious program—advocating peace, tolerance, respect for law.”

This is all happening again—and many times worse. Jesus Christ said, “Ye shall know them by their fruits” (Matthew 7:16-20). This world sorely needs justice, but what are the fruits of those who claim to be warring for racial justice today?

Satan has a stranglehold on this world, and it’s getting tighter. He is powerful. He is skilled at destroying lives and ripping nations apart. He uses people who conflate taking offense with pursuing justice.

“If ye fulfil the royal law according to the scripture, Thou shalt love thy neighbour as thyself, ye do well. But if ye have respect to persons, ye commit sin, and are convinced of the law as transgressors” (James 2:8-9). Respect of persons according to race or otherwise is sin. God’s law is love.

Leftists in America are telling the big lie that America is the most oppressive, racist country in the world and is using widespread, systemic oppression to exploit, enslave and “spirit-murder” nonwhites. (Of course, you could never convince them to go change places with a woman or a Catholic person in a Muslim country, or anyone in North Korea, Iran, Syria, Somalia, Venezuela, Uzbekistan, Turkey or many other places of actual oppression.)

Yes, there is racism in America. Yes, majorities have oppressed minorities. Yes, some have committed terrible acts. But probably no other nation in history has had so many different peoples get along as well as in America, where people have generally accepted and obeyed a law of the land based on a declaration that “all men are created equal and are endowed by their Creator with certain unalienable rights.” The left is trying hard to change that. And their poisonous words are having an effect.

Soon, we are all going to experience it in person, and grieve for what we gave up.

God hates actual racism and oppressive discrimination and all the conflicts and wars over race and ethnicity around the world throughout the ages. He sees those who have been and are being oppressed. He loves them! He will avenge them. He promises to bring them justice, to dry their tears and give them peace.