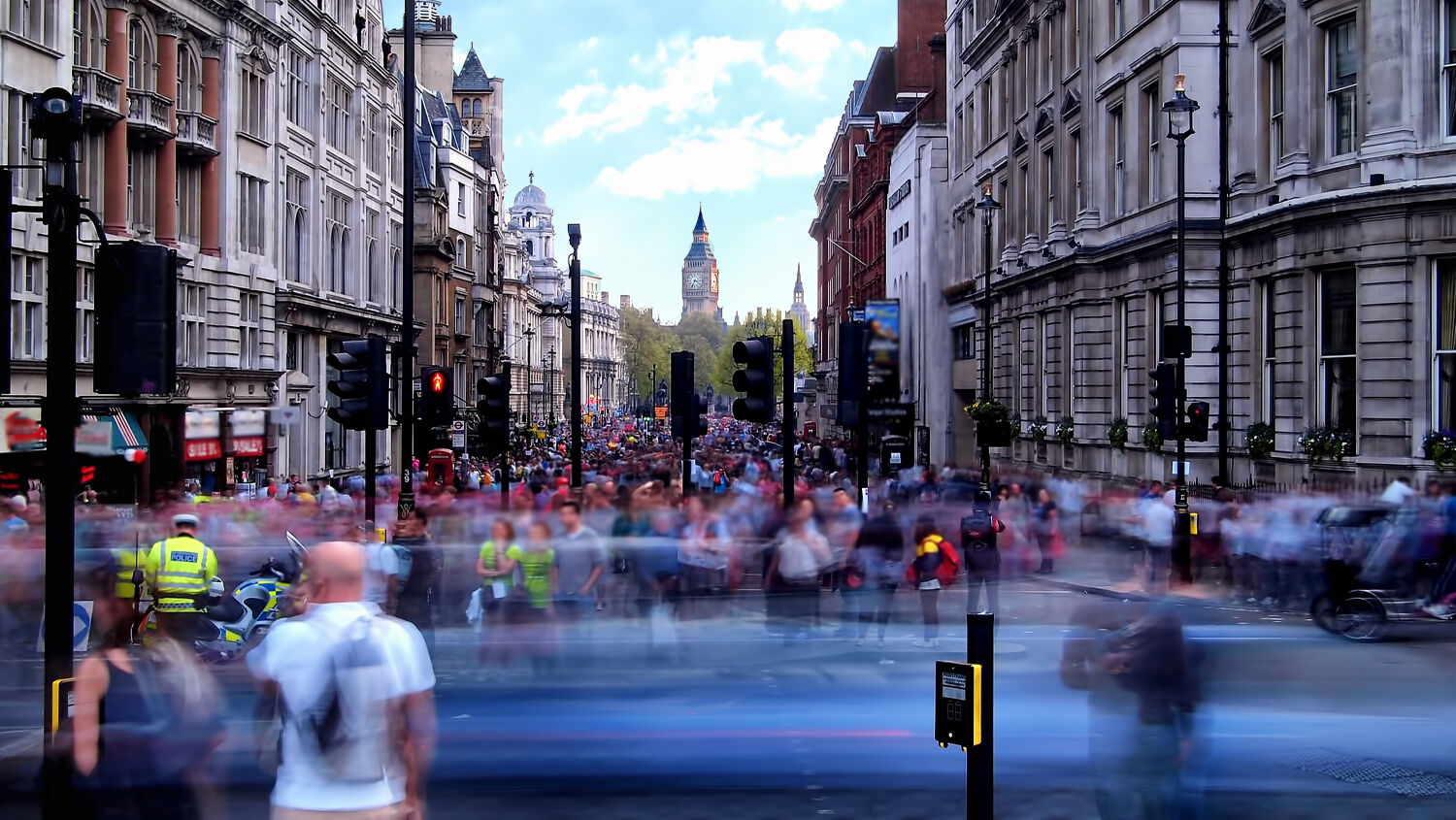 Good news in a government commission should have made banner headlines. But the media are uninterested.

Leftists ceaselessly decry “systemic racism.” They insist that ethnic minorities’ lower levels of education and income, and higher levels of crime, family breakdown and other problems, can all be explained by this structural disease in modern society. Last year, Black Lives Matter protests swept through America under this banner. Elites in media, entertainment, big business and government embraced the concept of institutional racism as fact. People in Britain and other countries joined in support.

The government of the United Kingdom responded by commissioning a group of 10 experts to examine the facts and determine whether the UK is, in fact, institutionally racist. Last week, the commission released its findings.

This landmark study should have made banner headlines. But the media, after spending more than a year amplifying radicals’ position on this issue, have been conspicuously silent about the report. If they have said anything, it has been only to condemn it hysterically.

You need to understand why.

The British government went out of its way to assess racism in Britain honestly. The commission was led by a black man, Dr. Tony Sewell, whose Ph.D. thesis was on “black masculinities and schooling.” He is the ceo of a charity that helps disadvantaged students, including minorities, study science and technology at the UK’s top universities. Including Sewell, nine of the 10 commission members were from ethnic minorities, with backgrounds in broadcasting, economics, education, health, policing and science. Their study focused on the role of racism in crime, education, employment and health. They studied writings of experts in their fields, personally interacted with different ethnic groups, and analyzed large amounts of data, including a massive government dataset provided by the Cabinet Office’s Race and Disparity Unit.

Here is how the Commission on Race and Ethnic Disparities summarizes its conclusions: “Put simply we no longer see a Britain where the system is deliberately rigged against ethnic minorities. The impediments and disparities do exist, they are varied, and ironically very few of them are directly to do with racism. Too often ‘racism’ is the catch-all explanation, and can be simply implicitly accepted rather than explicitly examined.”

The report says accusations of “institutional racism” are thrown about too often and should only be used when derived from actual evidence.

“The evidence shows that geography, family influence, socioeconomic background, culture and religion have more significant impact on life chances than the existence of racism. That said, we take the reality of racism seriously and we do not deny that it is a real force in the UK.”

The evidence shows that Britain has problems, but “systemic racism” is not one of them. Accusations of systemic or institutional racism should come from actual evidence.

For those invested in the systemic racism narrative, this conclusion is utter rubbish. They could not disagree more vehemently. They view the report, and the individuals who produced it, as worthy only of impassioned attack.

The Guardian condemned the report and stated that its very purpose was “to whitewash the problems of racism in Britain.” Media figures have publicly compared Dr. Sewell to members of the Ku Klux Klan. “Even before its publication, lawyer and political activist Dr. Shola Mos-Shogbamimu—one of the most toxic voices in Britain’s race-relations debate—branded Sewell a ‘token black man,’ who is responsible for ‘gaslighting’ the entire nation through ‘a white-supremacist lie,’” wrote Spiked columnist Dr. Rakib Ehsan. “University of Cambridge academic and race-baiting supremo Prof. Priyamvada Gopal questioned Sewell’s qualifications for undertaking the research. After conceding that Sewell did in fact have a research doctorate, Gopal said that even Joseph Goebbels—the Propaganda Reich Minister of Nazi Germany—had a Ph.D. An assortment of left-wing identitarian bigots on social media have hurled racially motivated abuse at Sewell—calling him a ‘coon,’ ‘coconut,’ ‘race traitor’ and ‘house negro.’ I am no stranger to this type of identitarian abuse—but even I have been taken aback by the tsunami of racial abuse from the supposedly ‘anti-racist’ left.”

The report did not say there is no racism in the UK. But it showed by several metrics just how much lives for ethnic minorities have improved, and how much progress race relations have made in the UK over the past 50 years. To take one specific example, it acknowledged the higher rate of coronavirus deaths among minorities, but explained the evidence to show that this is not caused by systemic racism.

This is good news, isn’t it?

The Telegraph reported that the commission found “no evidence that institutional racism exists in Britain. In fact, it points out that, in some areas, such as education, particular ethnic minorities outperform their white counterparts. Even more boldly it ventures that UK should be seen as a model for other white-majority nations.” Isn’t this something everyone should be able to celebrate?

Sewell’s report “is barbed with inconvenient facts,” the Telegraph continued. “The ethnic pay gap has shrunk to 2.3 percent overall and barely registers for employees under 30. Diversity is improving in professions like medicine and law.” This is all good news for people who actually want improvements in race relations.

But significant, documented improvements in race relations are not what leftists actually want. Their power comes from continuing to divide people.

The commission’s report also addressed this fact: “Just as racist behavior and racist messages are being amplified, so are accusations of racism that are harder to prove, open to interpretation, or even vexatious. The Internet has also exposed the problems inherent in a subjective definition of a racist incident. We can have a situation where the exact same action can be racism or not racism—depending on how someone perceives it. This means there is no clarity or consistency in identifying examples. It is now possible for any act, including those intended to be well meaning, to be classified as racist. Without clearer definitions, it will be harder to measure the true extent of racism.”

The report called for limiting “the widening charge of racism” and showed that many problems emerge from these wild accusations. For example, “Ethnic minority police officers are also experiencing racist abuse from citizens they serve—including from those in their own ethnic minority groups. Racist assaults against police officers in the Metropolitan Police service almost doubled between the year ending November 2019 and November 2020.” The report encourages bridging minority communities and the police together, rather than whipping up emotion with “defund the police” rhetoric.

This report found what many other studies have found: Family background is much more significant than racial background in influencing a person’s chance for success in life. “In many areas of investigation, including educational failure and crime, we were led to family breakdown as one of the main reasons for poor outcomes,” it reads. “Family is also the foundation stone of success for many ethnic minorities.”

Thus, to address disparities in income and other measures of success, you must try to strengthen the family. You must work to strengthen marriages; improve parenting; help fathers fulfill their roles as leaders, providers and protectors; help mothers fulfill their roles in prioritizing and nurturing their children. You must help families stay together and achieve success so that they raise strong, responsible, good citizens.

These are the real issues. And they are exactly the issues that radical leftists refuse to address.

Part of the report’s conclusion acknowledges how the Black Lives Matter movement increased public concern over race issues. “But most of us come from an older generation whose views were formed by growing up in the 1970s and 1980s. And our experience has taught us that you do not pass on the baton of progress by cleaving to a fatalistic account that insists nothing has changed,” it says. “And nor do you move forward by importing bleak new theories about race that insist on accentuating our differences. It is closer contact, mutual understanding across ethnic groups and a shared commitment to equal opportunities that has contributed to the progress we have made.”

How refreshing. So often we hear how society needs to have a “conversation about race”—a conversation entirely on the left’s terms—as if this will solve society’s problems. The reality is that the more we have this “conversation,” the more divided we grow, and the more toxic race relations become! The way the left views race does not solve problems. Leaving out evidence and facts, ignoring real problems and amplifying less significant ones, finding racism under every rock and within the inner heart and dna of every white person, condemning society itself for systemic, structural, inherent rigging against whole groups of people—these things do not improve race relations.

“The reality is that this country owes a great deal to the likes of Dr. Tony Sewell,” the Spiked columnist wrote. “Time and again, he is willing to put his neck on the line by shedding light on uncomfortable truths. He is sticking his head above the parapet for the greater common good. He has encouraged many to exercise personal responsibility and individual initiative in order to overcome adversity and progress in life. And in doing so, he has been accused of being an establishment ‘sell-out’ and betraying the ‘racial-justice’ cause, by identitarian grievance-mongers who would like to keep all non-white people locked in a perpetual condition of miserable victimhood” (emphasis added).

This is the ugly truth behind the “systemic racism” fiction. And it is terribly damaging.

Everyone, of every race, faces adversity in life. And God wants everyone of every race to take personal responsibility and individual initiative, along with His help, to work to rise above that adversity. That is how we grow up and mature and fulfill our potential.

Radicals who tell people that all their problems result from society being stacked against them are trapping people in failure. Telling people that the solution to their problems lies in fighting against society and making society change to accommodate them is a dangerous deceit that destroys individuals and encourages them to destroy society!

The UK government report will receive little attention because of the mainstream media’s commitment to the blm narrative that white people have built a system that holds down people who are not white. Reports like this expose that narrative as a lie. They show that it is an effort to ignore facts, to stir up emotions, to accuse and to divide us.

People brave enough to issue such reports show that there has been progress in society—that race relations do give every person the opportunity to succeed. Such reports do not show that Britain has no race problems, but that Britain is demonstrably innocent of what it is accused of. They point to actual solutions to some of the problems in society. They give people the knowledge and the tools they need to remain aloof of people who want to control them. They show people that they need to, and have the power to, take personal responsibility and improve their own lives.

That really is good news!