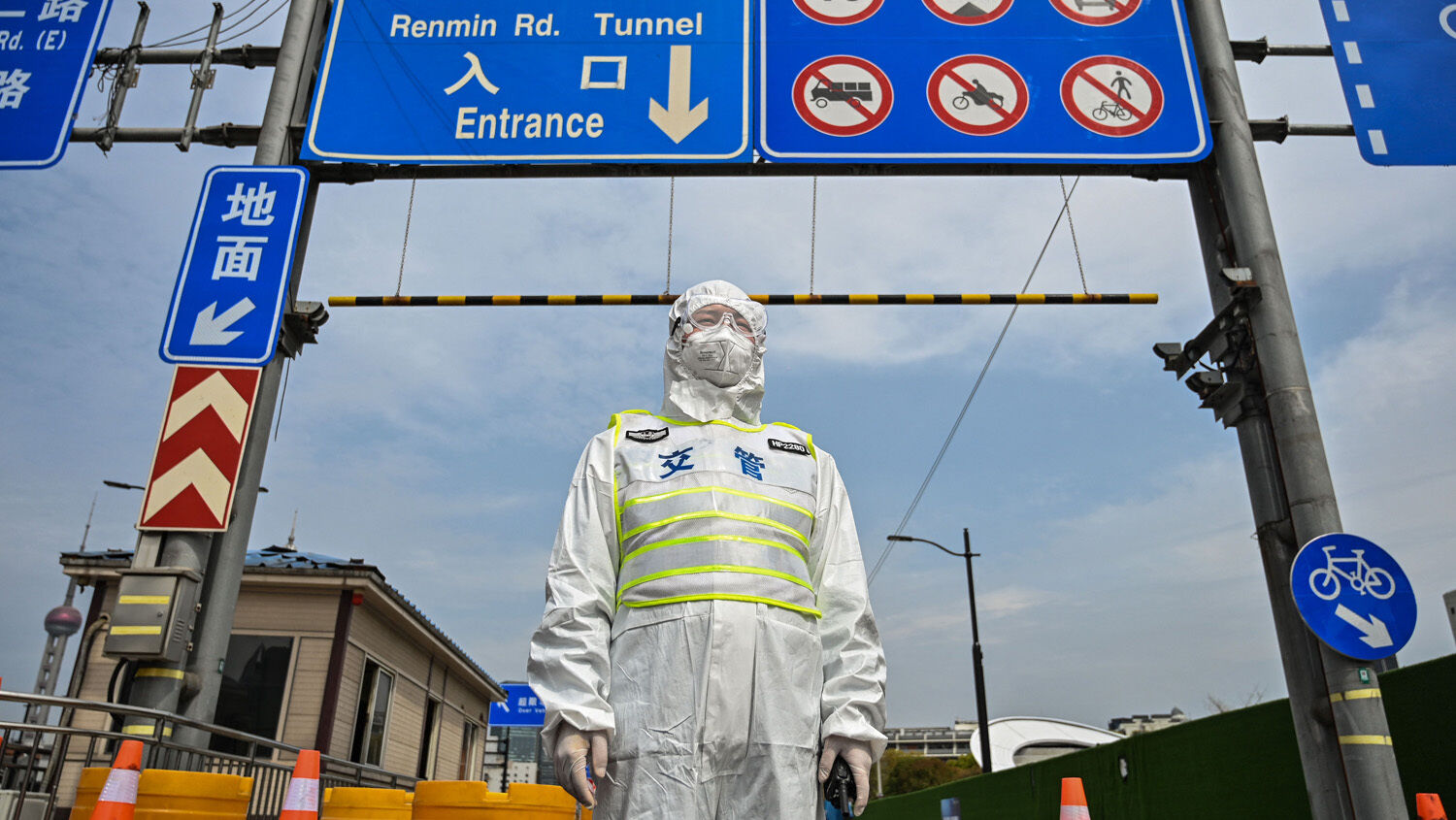 A transit officer, wearing protective gear, controls access to a tunnel in the direction of Pudong district in lockdown as a measure against covid-19, in Shanghai on March 28.
Hector RETAMAL / AFP) (Photo by HECTOR RETAMAL/AFP via Getty Images

A warning for the West

Shanghai is now more than three weeks into one of the strictest lockdowns since the beginning of the pandemic. A new covid outbreak hit the commercially important city in early March. But on April 4, a record 13,000 positive tests triggered a swift government response.

The measures have had little effect. On Wednesday, Reuters reported 25,000 new cases in Shanghai. There have been over 130,000 in total since March. But if the Chinese Communist Party (ccp) is to be believed, only three patients have died of the illness. The overwhelming majority are asymptomatic.

The ccp is taking no chances, though. For three weeks, residents have been forbidden from leaving their homes for anything but covid tests. Those who test positive are forced into makeshift quarantine centers. The rest aren’t allowed to take a walk, go to the movies, or even go to work. Many workers are actually living and sleeping at the office, forbidden from going home.

These harsh lockdowns also mean people aren’t even allowed to go grocery shopping. Videos have been circulating online of starving residents going to their balconies to beg for food and supplies. The response from the government via drones was resolute: “Please comply with covid restrictions. Control your soul’s desire for freedom. Do not open the window or sing.”

Some few brave citizens left their homes out of desperation. They were forcefully met by Chinese armed forces that have been deployed all over the city. Some are dressed in white “gas proof” gear. Some are in regular military regalia. Whatever the garb, they are meting out beatings to all those who defy the lockdown measures. Below is a video of People’s Liberation Army members forcing people onto a bus, ostensibly after a positive test.

Shanghai residents were roughly pushed and kicked onto the bus by “volunteers”. These volunteers were military personnel in gas-proof uniforms. To ensure that the Covid rules were strictly enforced in Shanghai.#上海疫情 #TheGreatTranslationMovement #大翻译运动 #偉大な翻訳運動 pic.twitter.com/SE8bH4GpxR

According to freelance journalist Chu Yang, a leaked document shows that the Shanghai lockdown will last until May. That means about 25 million people in China’s commercial capital will be trapped in their homes and offices for a month and a half.

The Chinese Communist Party is stubbornly enacting an aggressive zero-covid policy, with no regard for its citizens’ well-being. There are even videos of citizens being beaten or set upon by dogs if they leave their house. It’s a level of brutality that those in the West are wholly unfamiliar with.

This is what happens to those in #Shanghai who try to resist going to centralised #Covid isolation. #China https://t.co/vXYCjFoefU

What is happening in Shanghai is the face of communism. That city is the center of international travel and commerce. China is often applauded for its economy and some naive Westerners idealize it because of cities like Shanghai. But this lockdown shows that any appearance of freedom or prosperity is just an illusion.

Even more than that, it is a warning.

First, it is a warning to the United States and other Western nations about where increasingly leftist policies in our nations are leading. Chinese General Secretary Xi Jinping is a far-left tyrant with essentially limitless power within China. He believes that he knows best—that his intellect and noble vision authorize him to use merciless force against his people in any way he feels necessary. This belief was on glaring display when he instructed Communist Party members in 2014 to reform Chinese Muslims by showing them “absolutely no mercy” and by using the “weapons of the people’s democratic dictatorship … without any hesitation or wavering.” This belief was also evident in Xi’s ruthless and illegal crackdown on Hong Kong. And it is again on display with his unrelenting “zero-covid” strategy, and the brutality it is inflicting on the people of Shanghai.

Americans should see China as a cautionary tale. Instead, among America’s leftist radicals are increasing calls to “fundamentally transform” the country into something far more like China, and they’re willing to use extreme force to make the vision a reality. America’s radical leftists already use their control to silence critics and illegally amass power. The U.S.’s lockdowns and mask and vaccine mandates were part of this same movement. The U.S. should look at the terror and suffering in Shanghai and understand that that is where radical-leftist policies lead. Instead, American radicals openly praise China’s brutal dictatorship.

In an interview on cnn last week, Anthony Fauci said China’s “complete lockdown” works because “that prevents the spread of infection.” He went on to explain: “You use lockdowns to get people vaccinated so that when you open up, you won’t have a surge of infections.” However, when Fauci and company enacted lockdowns in the U.S., the vaccine didn’t even exist yet.

Regardless, it is clear that he supports China’s approach. He believes that the only “problem” China has “is that the vaccines they have been using have not been as effective as the vaccines that are used in the U.S., the [United Kingdom], the [European Union] and other places.” Fauci clearly believes that since America’s vaccines are supposedly better than China’s, there wouldn’t be any problem if the U.S. government enacted a lockdown as strict as the one in Shanghai.

Second, the situation in Shanghai should serve as a warning to the world about the rapid shift to a new global order. For the last few hundred years, Britain and then America have dominated the world scene and been the main global leaders. Their dominance has meant a period of relative stability. But Bible prophecy says that era is about to end, and a new kind of merciless and cruel rulership—exactly as we see in Shanghai—is about to dominate the entire world.

In Luke 21, Jesus Christ Himself prophesied of an era known as “the times of the Gentiles” (verse 24). Trumpet editor in chief Gerald Flurry explained in “What Are the Times of the Gentiles?” that in the Bible, the Gentiles are presented in contrast to the Israelites. While Israel in end-time prophecy refers mainly to the United States and Britain, “Gentile” refers to the non-Israelite peoples. Prophecy shows that as the modern Israelite nations decline, Gentile nations, such as China, will become the dominant world powers.

Very soon, it won’t just be in Shanghai where people are being starved and beaten. It won’t just be in Xinjiang where an entire ethnic group is systematically abused and killed. It might be hard to believe, but this is where America’s increasingly Communist policies are leading.

After all, the same Fauci who advocated “15 days to slow the spread” is now essentially praising China’s brutal measures in Shanghai.

The times of the Gentiles are nearly here. Just look at how quickly America has declined in the last two years. The septuagenarian in the White House epitomizes America’s decline. His radical policies have accelerated it. And Bible prophecy assures it. It also assures the corresponding rise of Gentile nations such as China. Its dominance over 25 million Shanghai residents is clear to see. This kind of rule will be the opposite of the relative peace of Anglo-American dominance. And it is prophesied to engulf the entire world in what Mr. Flurry has described as a “catastrophic storm.”

To fully understand who the Gentiles are, what their rule will look like, and what it means for you, please read “Wake Up to the Threat From China” in the February 2021 Trumpet issue.