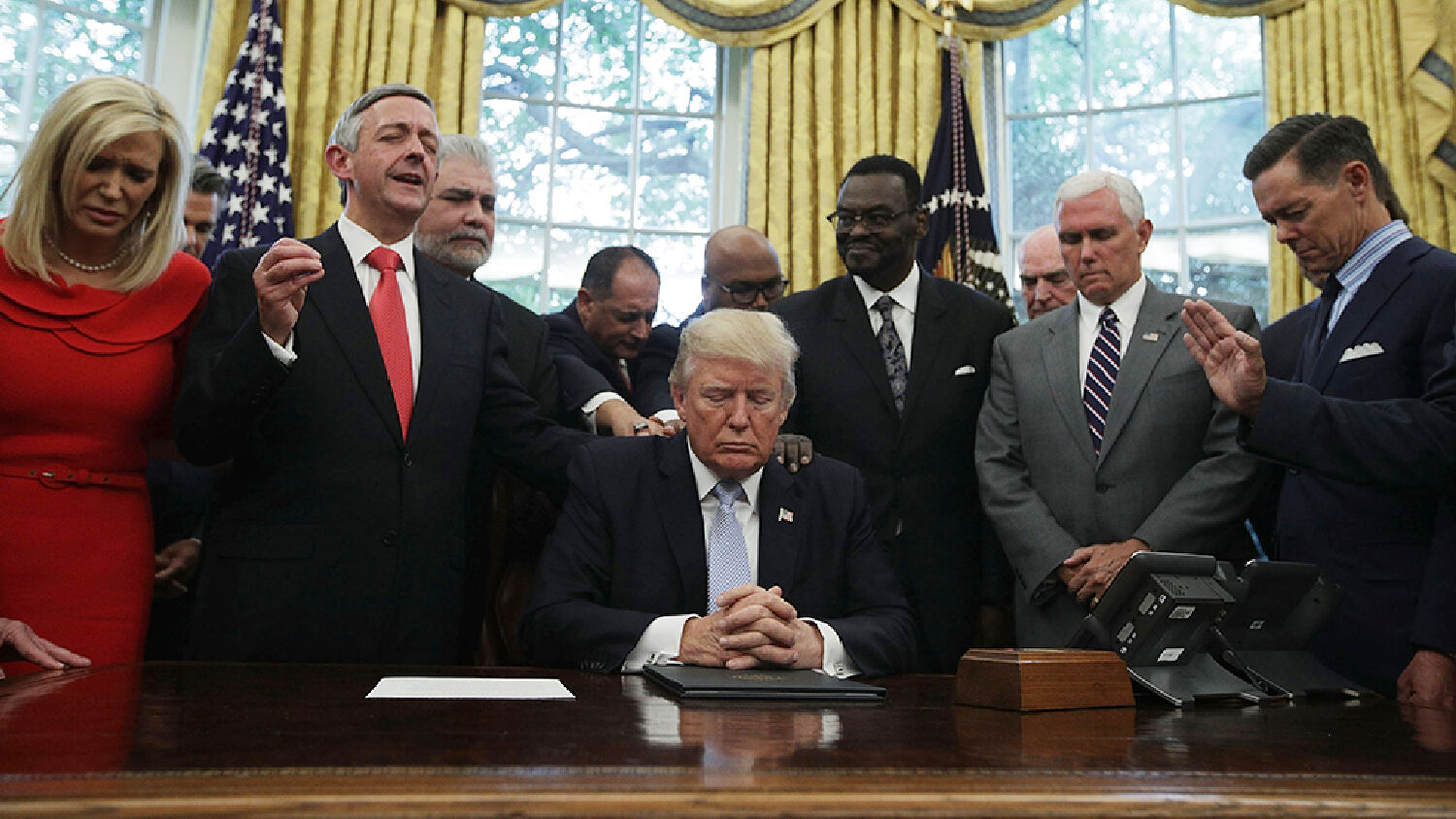 U.S. President Donald Trump, Vice President Mike Pence and faith leaders say a prayer during the signing of a proclamation in the Oval Office of the White House September 1, 2017 in Washington, DC.
Alex Wong/Getty Images

Remember The Apprentice, the popular reality television show hosted for 14 years by Donald Trump? The show followed the billionaire New York real-estate tycoon as he interviewed candidates for a high-level position in the Trump empire.

“Money, money, money, money … MONEY!” That was the show’s intro soundtrack, the irresistibly groovy bass riff from The O’Jays’s “For the Love of Money.” This tune told you all you needed to know about the show and its star. The Apprentice was a shameless celebration of money, materialism and power, as well as some of the ugliest parts of human nature. Each episode was a frenzy of greed, jealousy and competition set against a backdrop of private planes, palatial homes and stunning golf estates. Towering above the fray like a Greek god was the show’s cocreator and central character—a man who today considers himself …

The idea for this article came to mind while I was watching a recent bbc news report on the United States president’s decision to recognize Israel’s sovereignty in Judea and Samaria. The segment included B-roll footage of President Donald Trump opening a White House meeting with prayer.

Opening meetings with prayer isn’t unusual for Mr. Trump, who is remarkably open about his love of God, Christians and the Bible. But sitting on my couch in England, 7,000 miles from the White House, watching America’s president openly pray on a routine bbc news report was jarring. The star of The Apprentice now lives in the White House and prays before the world?

It made me wonder: Have we given enough attention to Donald Trump’s remarkable transformation from merchant playboy to conspicuous Christian?

At a time when the West is fast growing more secular, America’s president invokes God and religion more than any other Western leader on Earth. How did religion become, or appear to become, so important to Donald Trump? Before 2016, this man didn’t appear to have a pious bone in his body. Today, evangelical leaders from across America visit the Oval Office to pray over him.

Since he assumed office in January 2017, Mr. Trump has surrounded himself with Christian leaders and ministers. Evangelical ministers are routinely invited to meetings and other gatherings in the White House, and many top Christian leaders have direct access to the president, vice president and other top administration officials.

Mr. Trump recently employed Paula White, a former televangelist and his longtime “spiritual adviser,” to work alongside him in the White House. White prayed at Mr. Trump’s inauguration in January 2017 and prays regularly and publicly for the president, often before speeches and at political rallies. Last summer, she told her congregation in Florida, “When I walk on White House grounds, God walks on White House grounds.”

Evangelist Franklin Graham recently said that the attempts to overthrow President Trump are driven by a demonic power. Graham has reportedly discussed this with the president.

The president counts numerous influential Christian figures among his faithful supporters, including Dr. James Dobson, Robert Jeffress and Mark Burns. He communicates regularly with Jerry Falwell Jr., president of Liberty University and an influential evangelical. Falwell’s wife is apparently in regular contact with the first lady.

Mr. Trump has not just surrounded himself with Christian leaders; he has actively worked to Christianize his administration and policies. His May 2018 executive order placed limitations on Obamacare regulations imposed on religious organizations, took aim at a 1954 law preventing religious leaders from endorsing political leaders, and mandated the creation of a new office at the White House called the Faith and Opportunity Initiative.

It is not unusual for American presidents to invoke God, but what is remarkable about Mr. Trump’s religious devotion is both its sudden onset and the sheer ubiquity of God and faith in his administration. Before his inaugural, other than some occasional token references to God—like his awkward reference to “two Corinthians” instead of “Second Corinthians” in January 2016—Mr. Trump hardly mentioned God or Scripture.

Alex Morris wrote about Mr. Trump’s astonishing conversion in a Rolling Stone article this week titled “False Idol—Why the Christian Right Worships Donald Trump.” “Trump was exactly the type of character you would expect ‘values voters’ to summarily reject,” wrote Morris. “He never gained a majority of Christian votes in the primary. Even after he secured the nomination and named Mike Pence to be his VP, a survey of Protestant pastors conducted by Christian polling group LifeWay Research that summer found that only 39 percent of evangelical pastors planned to vote for him” (emphasis added).

By Nov. 8, 2016, something had changed. On Election Day, 82 percent of white evangelicals voted for Donald Trump. And many of these people will vote for him again next year. “Today, 82 percent of white evangelicals would cast their ballots for Trump,” wrote Morris, and “two thirds believe that he has not damaged the decency of the presidency, 55 percent agree with Sarah Huckabee Sanders that ‘God wanted him to be president,’ and 99 percent oppose impeachment.”

Donald Trump’s devotion to God, the Bible and Christian leaders—and, more importantly, mainstream Christians’ affection and loyalty to Donald Trump—has developed mainly since late 2016, and especially since he became president. Something has changed since January 2017. What was it?

The answer is revealed in the Bible, and especially in one key prophecy in Amos 7. This prophecy describes the emergence of an end-time type of Jeroboam ii, the king of Israel in the eighth century b.c. (Evangelical Christians are right when they compare Mr. Trump to a king of Israel; they just have the wrong king.) 2 Kings 14 records that King Jeroboam presided over a spectacular resurgence in which Israel expanded its borders, conquered its enemies, and accumulated incredible prosperity.

As impressive as Jeroboam ii was, however, he was not ultimately responsible for Israel’s success. 2 Kings 14:27 says that God mercifully “saved them [Israel] by the hand of Jeroboam the son of Joash.” Sadly, Israel’s king didn’t see it this way. Jeroboam ii, like his forefather Jeroboam i, talked about God often and appeared religious. But he disobeyed God, vainly took credit for Israel’s success, and flatly rejected the warnings of God’s prophets, including Amos. Left with no choice, God punished him.

The prophecy in Amos 7 describes an end-time Jeroboam who will rule over America (a nation descended from biblical Israel) right before the return of Jesus Christ. Like Jeroboam anciently, this man will appear religious and will have a powerful religious following.

For example, Amos 7:10 shows that Jeroboam works closely with “Amaziah the priest of Bethel.” This priest actually becomes Jeroboam’s spokesman and in verse 13 delivers a message from Jeroboam to God’s true prophet. He tells him, “But prophesy not again any more at Bethel: for it is the king’s chapel, and it is the king’s court.” A chapel is a place of worship. And it belongs to Jeroboam!

“This is all about religion! Jeroboam has a chapel and a high priest from God’s own Church!” wrote Trumpet editor in chief Gerald Flurry in a June 7, 2018, co-worker letter.

If you haven’t read it already, you must read Mr. Flurry’s article “Who Is the Modern-Day Jeroboam?” Published in the April 2017 Philadelphia Trumpet (our free print magazine), this article was actually written around the time Mr. Trump was inaugurated. It clearly and powerfully explains Amos 7 and how America’s president is fulfilling this prophecy right now. Donald Trump had only just assumed the presidency and Mr. Flurry was revealing Amos 7 and how it explained the new president’s sudden religious conversion and his newfound alliance with the evangelicals.

Amos 7 “strongly indicates that this end-time Jeroboam has a religious following!” he wrote.

Mr. Flurry also warned: “Something is wrong with most religions today—even those that claim to follow the Bible and to understand God. The modern-day Jeroboam is causing other religions to look to him—not the true God. It is going the same way it did anciently, only in this end time there is a much greater abundance of truth.”

I thought about this article from Mr. Flurry when I watched that bbc news report and saw Donald Trump—the man who created and starred in The Apprentice—praying before the whole world. I think about Amos 7 every time I see a photograph of Mr. Trump in the Oval Office surrounded by evangelical leaders.

Donald Trump is, in many respects, an extraordinary man, and his presence in the White House generates an endless stream of stories. But so much of the news about America’s president is insubstantial and inconsequential, and a lot of it is simply untrue. Meanwhile, hardly anyone has noticed the most powerful aspect of Donald Trump’s presidency: his prophesied transformation from merchant playboy to conspicuous Christian!

It’s tragic, really. And it speaks volumes about the state of America’s media and society.