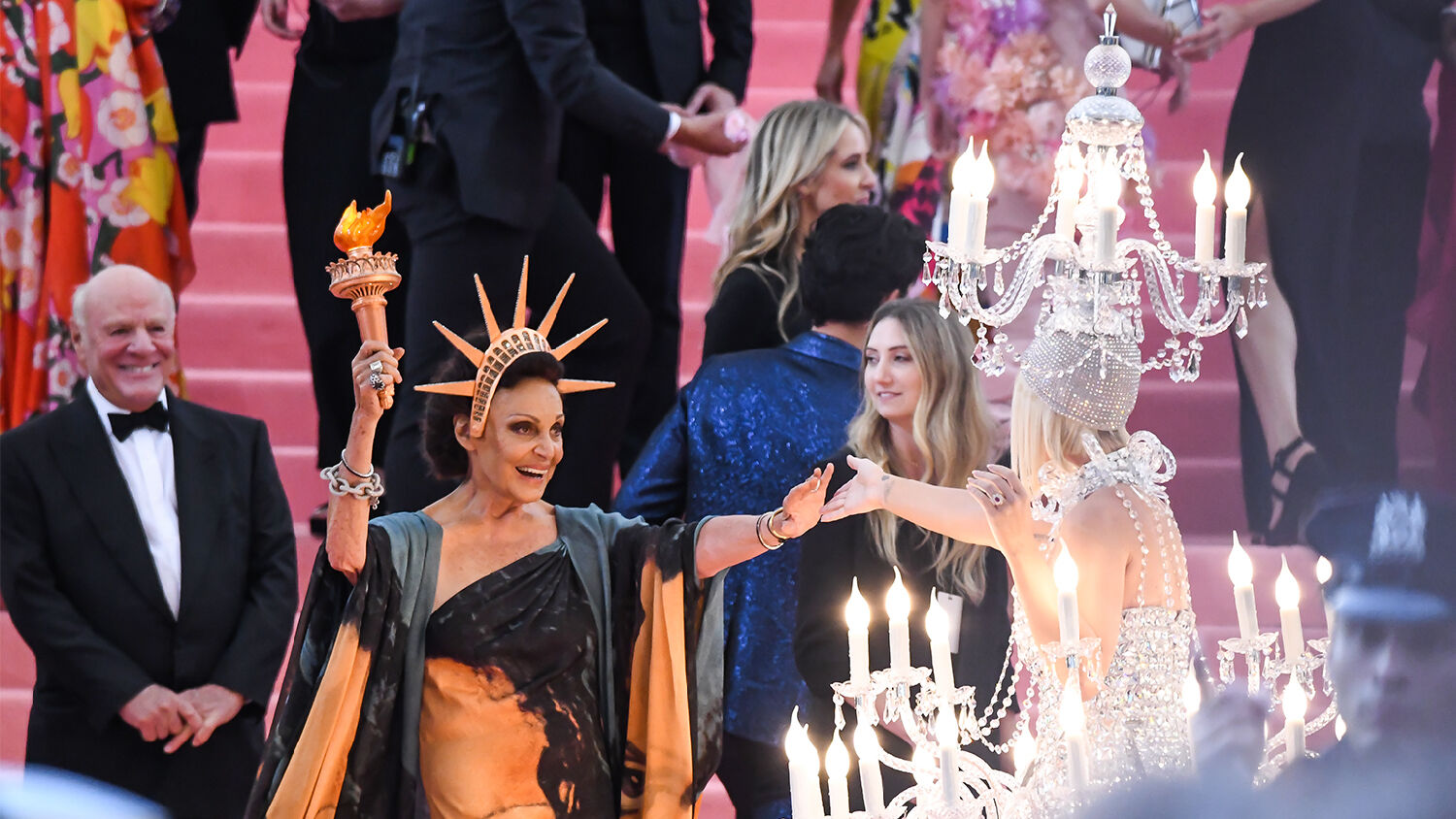 What do you get when you toss 200 celebrities, fiber-optic lights, 3-D printed flower petals, a tangerine caftan, latex, feathers, crystals and candles into a rainbow? The Met Gala!

This annual fundraiser is a highlight of New York’s social calendar and the most exclusive party in the world. Created to raise money for the Metropolitan Museum of Art, the gala is attended by a select group of celebrities and rich people, many of whom dress according to the established, usually debauched, theme in the most eccentric clothes you will ever lay eyes on.

To art and fashion aficionados, the bizarre, extravagant outfits are creative and brilliant; and the Met Gala is a gaudy celebration of art as fashion. Personally, I’ve always viewed the fest as a frivolous party where dysfunctional, narcissistic celebrities compete for the title of world’s weirdest person. But seeing photos from last Sunday’s gala—of Katy Perry wearing a chandelier and Jared Leto toting his decapitated head and Harry Styles pirouetting the red carpet in heels and a black sheer blouse—I realize now that I was wrong. The Met Gala is valuable as a window into America’s soul.

It’s easy to ignore the Met Gala, with all its extravagance and absurdity, as an anomaly: a marginal event for a fringe minority. But this view overlooks a larger lesson. The Met Gala actually celebrates and epitomizes a way of thinking, a lifestyle. It is, in many respects, a glimpse of the future. This lifestyle isn’t practiced by celebrities only. The spirit of the Met Gala is rank materialism, lawless creativity, epic vanity and chronic perversion. And it courses like a raging river through Western culture.

Many of us simply ignore the likes of Lady Gaga and Kim Kardashian, giving no credence to what these people think or believe or how they behave. But we are in the minority. These celebrities are the moral and ideological leaders of the Western world. Individually, each one influences millions through his or her music, movies and social media posts. As a group, they shape the entire culture. But the Met Gala also shows that these celebrities are not just a cause, they are a result. They are a product of our society’s imagination. They exist in their celebrity form because there is an appetite for the spirit and lifestyle that they are selling.

You see, the Met Gala reveals a nation and culture almost totally consumed by vanity, materialism and depravity.

Why does this matter? Because the history of great nations and empires from the past, from ancient Rome to Renaissance Florence to pre-Nazi Germany, records that national collapse is preceded by gratuitous decadence and obscene pageantry. History shows that wanton materialism and an addiction to entertainment and recreation breed weakness, laziness and ignorance. That immorality and lawlessness destroy nations.

“Almost from the beginning the Roman stage was gross and immoral,” wrote Philip Van Ness Meyer in his 1910 book, Rome, Its Rise and Fall. The stage, he wrote, “was one of the main agencies to which must be attributed the undermining of the originally sound moral life of Roman society. So absorbed did the people become in the indecent representations of the stage that they lost all thought and care of the affairs of real life” (emphasis added throughout).

American author Daniel P. Mannix made a similar observation about ancient Rome in Those About to Die. “With the economic and military position of the empire too hopelessly complicated for the crowd to comprehend, they turned more and more toward the only thing that they could understand—the arena.” Perplexed and disenfranchised by politics and the complex nature of Rome’s problems, the ancient Romans fixated on entertainment and recreation.

In the decadent empire prior to its collapse, the name of a great general or a brilliant senator meant nothing to the average Roman, wrote Mannix. However, “the average Roman could tell you every detail of the last games.” I suspect that the number of Americans interested in the Met Gala or Game 4 of nba semifinals on Sunday far exceeded the number interested in Hamas’s launch of 690 rockets into southern Israel, or the left’s ongoing attempt to take down U.S. Attorney General William Barr.

The history of ancient Rome demonstrates powerfully that a nation is most at risk during times of power, stability and affluence. The ancient Romans “went on getting, studying, enjoying, dissipating—doing everything except to prepare for fighting,” wrote William Stearns Davis, “until Alaric sacked the Eternal City” (The Influence of Wealth in Imperial Rome).

Prior to Rome’s fall, Romans lived a Met Gala lifestyle: a self-absorbed life in pursuit of material goods, recreation and carnal gratification. The result? The average Roman was ignorant. He was out of touch with the state of the empire. He was unprepared and unwilling to fight. He was blind to the political ineptitude and dysfunction, and the outright deceit, practiced by Rome’s leaders. He didn’t realize that his nation was being hollowed from the inside. And he didn’t see Rome’s enemies growing in power and beginning to mobilize.

“From the morning to the evening, careless of the sun or of the rain,” wrote Edward Gibbon in The Decline and Fall of the Roman Empire, “the happiness of Rome appeared to hang on the event of a race.”

Today, via YouTube, Twitter, Instagram, Snapchat, Facebook and Cable tv, citizens of the Western world can tune in for a chariot race 24-7. The happiness of we modern Romans depends on the games and entertainment on our screens, on the shot of dopamine released when we admire Chip and Joanna’s latest home remodel, or the latest style in shoes from Guillaume Marie, or when someone likes something we post. There’s a Met Gala going on every hour of every day.

Ancient Rome isn’t the only empire that furnishes this lesson. Florentine Histories, Niccolo Machiavelli’s treatise on the history of Florence, makes similar observations about the Italian city toward the end of the Renaissance and prior to the Siege of Florentine by the Spanish in 1529. “Hence arose many of those evils which usually result from peace; for the youth having become more dissolute than before, more extravagant in dress, feasting and other licentiousness, and being without employment, wasted their time and means on gaming and women; their principal study being how to appear splendid in apparel, and attain a crafty shrewdness in discourse ….”

Remarkably, Machiavelli documented the state of fashion in Renaissance Florence, even noting that its decadence belied a fatal weakness for materialism and vanity.

It was the same in the 1920s and early 1930s in Germany. Prior to the arrival of Adolf Hitler and National Socialism, Germany, and especially Berlin, was immersed in the Met Gala lifestyle. “High living, a vibrant urban life and relaxed social attitudes, along with the influx of American money defined the Golden Twenties in Berlin that was the most creative period in German history. Writers, poets, artists from London, France, the United States arrived in the German city to witness and experience the wild erotic sexual freedom along with curiosity seekers, voyeurs and homosexuals,” wrote the Daily Mail on Nov. 25, 2014.

In 1931, wrote Italian author Luigi Barzini, “Berlin was surely the artistic capital of Europe, full of brilliant theaters, cabarets, avant-garde art shows, trail-blazing films, experiments of all kinds. [In Berlin], there were men dressed as women, women dressed as men or little schoolgirls, women in boots with whips ….” Again, the parallels are extraordinary!

This is not to say Germany’s 1920s culture, its flirtation with progressive art, or its willingness to step outside the established boundaries of morality, are directly responsible for Adolf Hitler. It is a fact though that the Met Gala spirit of 1920s Berlin did allow for and even created the social, cultural and political conditions that facilitated the rise of Hitler and National Socialism.

Aren’t these historical parallels truly remarkable? Don’t they also present us with opportunity? The opportunity to look in the mirror and see who and what we are, both individually and collectively (or both), and to recognize the path we are on. The opportunity to understand the futility and hopelessness of the Met Gala lifestyle. And the opportunity to change the way we think and live and behave so that we can escape the inevitable collapse.

Before I finish, it’s important to note that these historical examples confirm Bible prophecy. The Bible is literally filled with prophecies warning us not to fall into the Met Gala lifestyle, and of the consequences for those who do. “The history of Rome confirms what the Bible teaches about marriage and family!” wrote Trumpet editor in chief Gerald Flurry in his reprint article “The Modern Romans.”

In Matthew 24, Christ Himself warns that “as the days of Noe were, so shall also the coming of the Son of man be. For as in the days that were before the flood they were eating and drinking, marrying and giving in marriage …” (verses 37-38). The Bible clearly endorses eating, drinking and marrying as good things. Christ is saying here that human beings in this end time would be abusing these three. Study the whole chapter, and you’ll find that He’s actually warning about the Met Gala spirit.

In 2 Timothy 3, the Apostle Paul said that men in the end time would be “lovers of their own selves, covetous, boasters, proud, blasphemers … lovers of pleasures more than lovers of God” (verses 1-4). In Leviticus 26:19, God says explicitly that if our people descended into abject sin and refused to repent, then He would break the pride of our power.

The question to dwell on now is, what will it take for mankind to accept this truth and change?