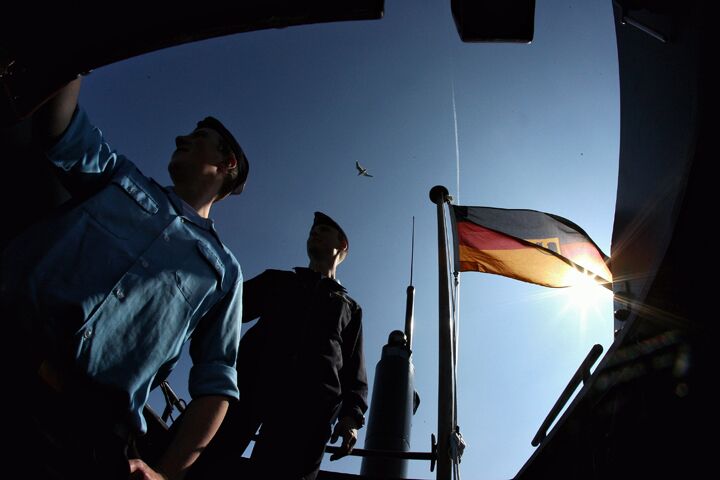 Will Germany amend its constitution to give its military a greater role in both domestic and foreign affairs?

The German government is planning to contribute one naval frigate and 1,400 troops to Operation Atalanta, the European Union anti-piracy mission set to commence off the coast of Somalia in mid-December.

Even as the preparations are under way, however, a debate is raging in Berlin as to just how far German warships can take their fight against piracy without violating the German Constitution. As it stands now, Article 35 of Germany’s Federal Constitution allows military ships to confront pirates only while they are attacking other vessels; the military is not empowered to pursue fleeing pirates.

The German Constitution, written in 1949, established a strict separation between police and military, because the Nazis had blurred that separation, leading to political oppression by the military and a ruthless police state.Chancellor Angela Merkel’s conservatives would like to see a robust mandate that enables German soldiers to not only fight but also pursue and arrest pirates; the center-left Social Democrats, their government coalition partner, argue that only federal police could do that.Germany’s federal police are hardly able to fight pirates off the coast of Somalia, however, and the Social Democrats realize that.They fear, however, that the conservatives will use the anti-piracy mandate to push through a change of the Constitution to hand German soldiers additional security powers inside Germany. One potential security job the German armed forces could take over is fighting terrorists, which domestically is the task of the federal police.

Increasing acts of terrorism and piracy have shown the Germany people that they cannot rely on the United States to keep them and their business interests safe. That is why many Germans want to amend their constitution in order to allow their armed forces to take over policing responsibilities in times of crisis. Such an amendment would likely expand far beyond just allowing frigates to pursue pirates to also allow German military troops to take over policing operations within Germany in “emergencies.”

Until recently, any efforts by German conservatives to enact such an amendment have been blocked by the Social Democrats. Since early October, however, many Social Democrats have shown signs of reversing their opinion and supporting a constitutional alteration that would allow the military to take over for the police when police resources are “insufficient.” More opponents of this proposed amendment are likely to change their thinking as acts of violence and terrorism become more prevalent in Germany and around the world.

It may seem that such an amendment to Germany’s constitution would increase world stability by allowing the Bundeswehr to act decisively against threats like Somali pirates and Islamist terrorists. In the end, however, this constitutional alteration would break down the barriers preventing Germany’s military, police, and intelligence agencies from consolidating into a single, over-arching martial power.

For more information on why you should be concerned about developments like this, read Germany and the Holy Roman Empire.