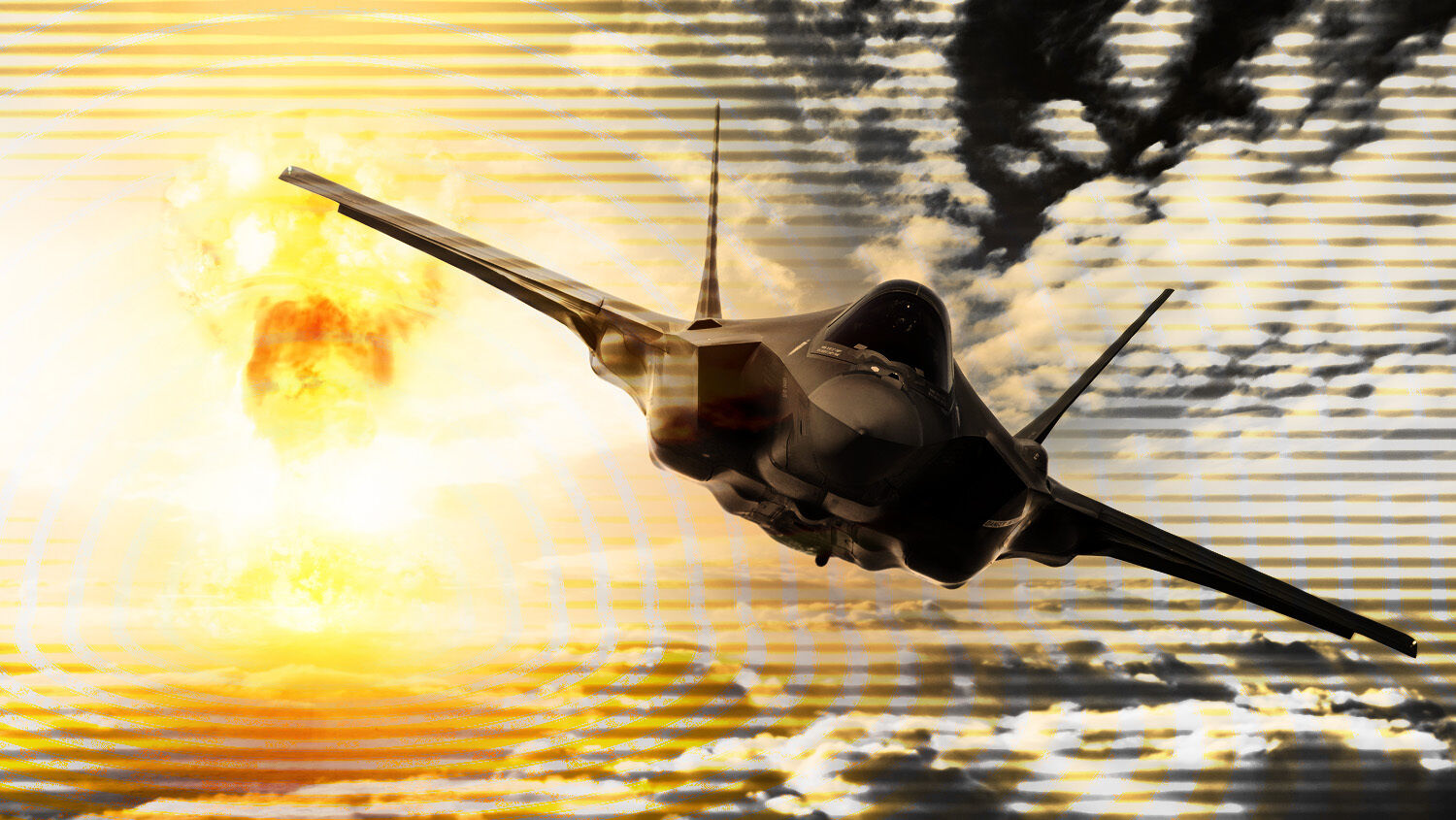 Two weeks after Germany announced its big spending boost, it revealed what it planned on spending a large amount of the cash on: American-made F-35A Lightning ii jets.

These are America’s most modern fighter jets, chock-full of America’s top technology. Only the United States’ closest allies are allowed to buy them. To be getting such jets is a major military advancement for Germany. For the first time, the German Air Force will have a stealth jet. This will also be its first “fifth generation” fighter. But most significantly, this jet is designed to carry nuclear weapons.

In Belgium, the Netherlands, Italy, Germany and Turkey, the U.S. stores about 150 to 200 thermonuclear bombs. It originally deployed these bombs and more to nato nations in Europe during the Cold War. Are these bombs still necessary? Is it still worth the risk to leave nuclear weapons in nations that were America’s enemies as recently as World War ii? These questions apparently don’t concern American leaders, who are now giving Germany the ability to put these bombs on a stealth jet.

Does anyone remember the destruction these nations caused or the devastation nuclear weapons have wreaked?

Nuclear weapons are a horrific menace. Just one can vaporize a city full of people. Two hundred of them are enough to destroy the whole world! Yet America has given those bombs to these five nations—two of which were our bitter enemies just 75 years ago!

In the minds of many people, Russia’s invasion of Ukraine has made nuclear war a real possibility. Russian President Vladimir Putin placed his nuclear forces on high alert in February. He threatened “consequences greater than any you have faced in history” to any nation that interfered with his conquest of Ukraine.

Now Germany is thinking about nuclear weapons too. The only planes Germany currently has to carry the B61 nuclear bombs stationed there are Tornado jets. The Tornado took its first flight nearly half a century ago and is now obsolete.

America is also upgrading the B61 bombs stationed in Germany and elsewhere, making them more accurate and modifying them to fit the F-35. The upgraded bombs will have gps guidance and a variable yield—meaning they can be dialed up or down to create a range of explosions, from 50 times smaller than the bomb that destroyed Hiroshima to one three times larger. Director of the Nuclear Information Project Hans Kristensen described it as an “all-in-one nuclear bomb on steroids.”

America is giving Germany access to its most-advanced and deadliest weapons. The crucial question is, does the United States really have control over those bombs?

Tactical weapons are usually carried by short-range delivery vehicles like cruise missiles or fighter or bomber aircraft with ranges under 850 miles. They cannot be launched intercontinentally, but they are small enough to be shipped wherever needed in the back of a truck!

Another horrifying possibility is the risk these smaller devices have of being stolen by rogue nations or terrorists. These are immensely powerful weapons! Can we really trust other nations with such firepower?

How Secure Are These Weapons?

These weapons technically belong to Washington, but do they really? They remain under U.S. control unless permission is given to hand them over to the host nation in times of war. However, following a series of blunders over the years, the security of these nukes has been called into question.

“According to a Blue Ribbon Review set up by the U.S. Air Force in 2008, most U.S. nuclear weapons storage sites in Europe do not meet U.S. Defense Department security standards,” wrote Tom Sauer and Bob van der Zwaan in a May 2011 report for the Harvard Kennedy School, titled “U.S. Tactical Nuclear Weapons in Europe After NATO’s Lisbon Summit: Why Their Withdrawal Is Desirable and Feasible.”

The Kleine Brogel Air Base in Belgium is one base that hosts America’s tactical nuclear weapons. In 2001, this base was the target of an al Qaeda extremist named Nizar Trabelsi. In 2010, the same base was penetrated by peace activists. The activists climbed the perimeter fence and wandered around the base for more than an hour, videotaping their escapade. When they were finally caught, base security didn’t even confiscate the videotape!

It is appalling that the U.S. is so careless with something so deadly dangerous! This is the kind of mistake that will have terrible real-world consequences.

Do you think the European nations that host these weapons are as indifferent about them as America is?

Think about the potential for a nuclear debacle. Little could stand in the way of those nations taking over those bombs and using them however they choose. Those weapons could conceivably be turned back on America!

How naive America is to entrust this immense firepower to nations that so recently—and throughout history—have proved to be enemies of the free world!

Giving Germany the F-35 shows a monumental level of trust. This would allow Germany to carry out a stealth nuclear attack. The plane is also designed to be the backbone of the U.S. Air Force. It’s an impressive aircraft in many ways, but it has been plagued with some huge weaknesses—especially when it comes to cyberwarfare. The F-35 has been called a flying supercomputer, and it is shockingly vulnerable to being hacked. Germany and others that operate the plane will be in a perfect position to explore all these weaknesses.

Right now, Germany seems to be an ally of the United States. But what if this nation—our archenemy in World Wars i and ii—turned against us in the next war?

Germany claims to be an ally. Yet Europe is sending Russia more money now than it was before the Ukraine invasion! Germany has led all of Europe to refuse to boycott Russian oil and gas. They’re not even taking simple steps to reduce the money they send Russia. Is Germany really acting like an ally, especially one America can trust with the most destructive weapons ever produced?

America trusts Germany, but history screams that it shouldn’t!

The trust America is placing in Germany is absolutely condemned by the Bible. Why? Because it is trusting other nations rather than trusting God.

When Germany announced its rearmament, America welcomed the decision with rapturous applause.

In the Bible, God condemns America and Britain (and other modern descendants of ancient Israel) for forsaking Him and for doting on their “lovers.” And today, what do we find ourselves doing? Arming two warlike nations, our historical enemies, with nuclear firepower! This is an appallingly dangerous mistake!

In the end-time book of Ezekiel, God says, “And Aholah [speaking of the modern nations of Israel] played the harlot when she was mine; and she doted on her lovers, on the Assyrians her neighbours …. Wherefore I have delivered her into the hand of her lovers, into the hand of the Assyrians, upon whom she doted” (Ezekiel 23:5, 9). This whole chapter concerns Israel, here called Aholah, and the Jews, called Aholibah, setting themselves up for one of the most shocking betrayals in history!

The Assyrians are the forefathers of the modern Germans, and one of the names used in biblical prophecy to refer to Germany today. (We prove this in our article “Is Germany in Bible Prophecy?”)

Ezekiel’s prophecy continues, “She [America and Britain] doted upon the Assyrians her neighbours, captains and rulers clothed most gorgeously, horsemen riding upon horses, all of them desirable young men” (verse 12). Germany is a very militaristic country, a nation with impressive soldiers. Now, as this country dramatically expands its military, America is celebrating.

“And as soon as she saw them with her eyes, she doted upon them, and sent messengers unto them into Chaldea. And the Babylonians came to her into the bed of love, and they defiled her with their whoredom, and she was polluted with them, and her mind was alienated from them” (verses 16-17). In our time, “the Babylonians” refer to the Holy Roman Empire, which has Germany, Italy and the Vatican at its core.

God has a strong view about cozying up to such “lovers”! It is a matter of trust. America has no trust in God for protection, so it is trusting another nation—in this case, one with a terrifying history! We have put human beings ahead of God. God condemns modern Israel—especially America, Britain and the Jewish state—because they have “forgotten me” (verse 35). That is a serious mistake these nations are going to regret.

This is an insane policy, even by normal standards of common sense. But God sees it for what it really is. He says America and Britain are worse than a prostitute: We are like a woman who has forsaken her husband and become a prostitute who pays the customer to come to her (Ezekiel 16:33-34). That’s how abominable this is to God!

The sobering reality is that any one of the countries that have those bombs could take control of these weapons by force and use them against the U.S. Two hundred nuclear bombs are sitting in European countries—enough to destroy the world—and the proliferation is spreading!

But the awesome news is that Christ will return! He will let us experience the suffering we have brought upon ourselves because of our sins. But just as sure as those seven resurrections of the Holy Roman Empire have come on the scene exactly according to prophecy—and just as sure as the prophesied World War iii is about to come—we can be absolutely confident He will return.

When that happens, these bombs and all the destruction they wreak will be destroyed forever. Jesus Christ will bring the solution to this terrible problem. You can prove that truth straight from your own Bible.

Thank God for that endless hope!