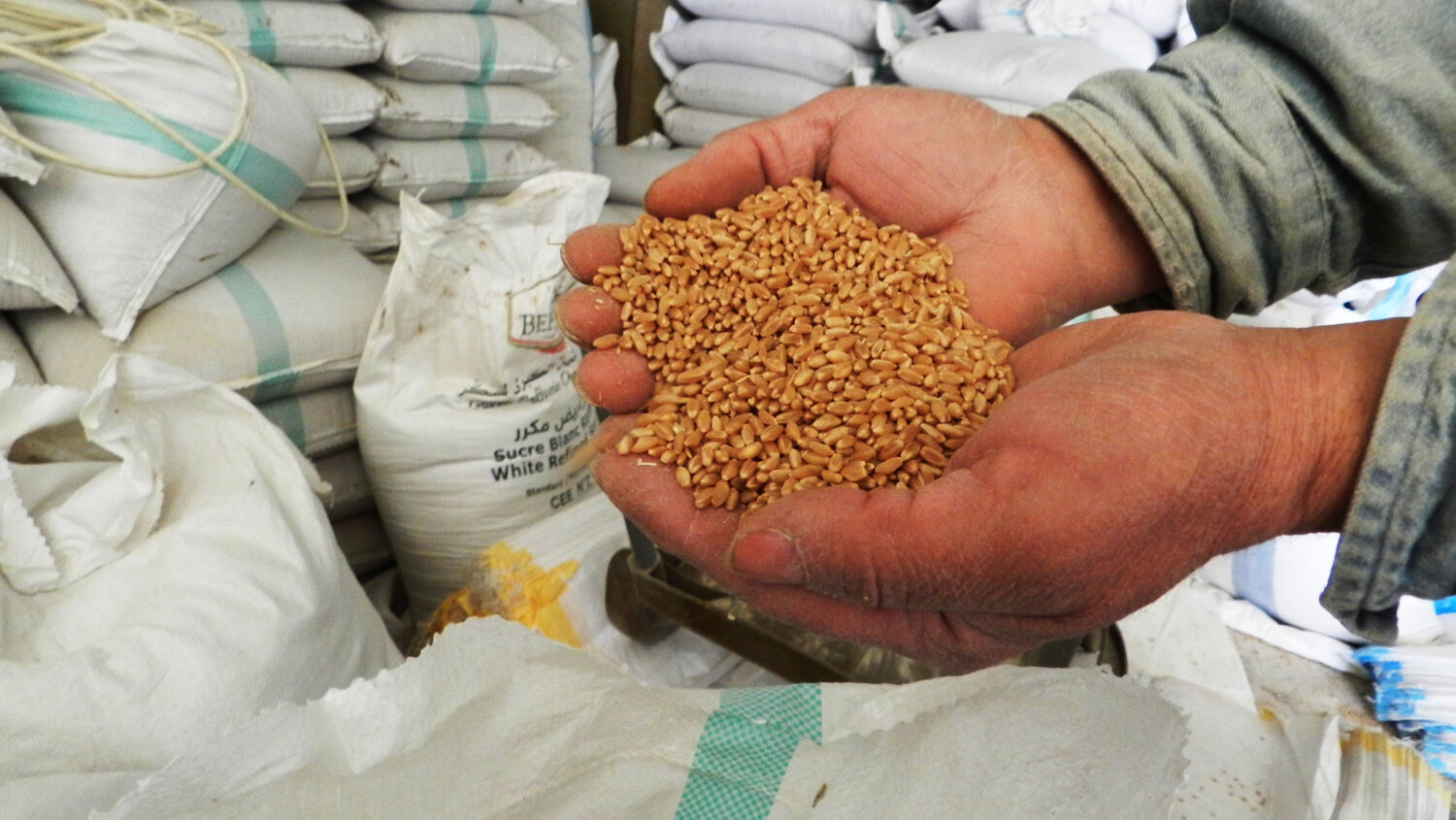 The owner of a warehouse of wheat and grains displays Ukrainian wheat in Hasbaya, southern Lebanon, on February 28.
Taher Abu Hamdan/Xinhua via Getty Images

The cost of grain is going up as Ukrainians decide whether to farm or fight.

Russian tanks are not just threatening Ukrainian cities, they are threatening the global food supply. Ukraine grows 16 percent of the world’s corn, and Ukraine and Russia together grow a quarter of the world’s wheat. Yet Ukraine is not shipping this grain overseas, because ports on the Black Sea have come to a standstill due to the Russian invasion.

Corn futures have risen 18 percent since Russia invaded, while wheat futures have risen 40 percent. This is the fastest price increase in at last 60 years, and prices may go much higher if Ukrainian farmers are unable to plant their fields this spring. Almost 5 percent of Ukraine’s population has fled the country already and supply chain breakdowns are making it hard to get fertilizer. Many farmers are trying to decide whether or not they should plant this year.

If a sizable share of Ukraine’s farmers deem it is too risky to plant, then the price of bread, noodles and animal feed will dramatically increase around the world. Ukraine is a leading wheat supplier for countries across the Middle East and North Africa, so war-induced grain shortages could have serious ripple effects in some volatile regions.

“Remember, bread riots are what started the Arab Spring; bread riots are what started the French Revolution,” said Teucrium ceo Sal Gilbertie, who works for the largest U.S. exchange-traded fund issuer focused solely on agriculture funds. “It is a biblical event when you run low on wheat stocks. You won’t see a global food shortage. Unfortunately, what you’re going to see globally is that billions of people might not be able to afford to buy the food.”

A member of the bakeries division at Egypt’s chamber of commerce told Bloomberg that a pack of five flatbread loaves now sells for $0.48 in the greater Cairo area, up from $0.32 a week ago. That might not sound like much to an American or European citizen, but angry riots broke out across Egypt the last time the government cut bread subsidies amid an economic crisis. The war in Ukraine could lead to a revolution in Egypt if food gets expensive.

Even before Russia invaded Ukraine, food prices around the world were at a 10-year high due to supply chain shortages created by government-mandated covid-19 lockdowns. In America, groceries are about 6.5 percent more expensive than they were a year ago, but the situation is far worse globally. The United Nations Food Agency reports that the price of food has increased 20.7 percent year on year around the globe. This price hike is largely due to the rising cost of vegetable oils and dairy products, and rising grain prices affect dairy prices as dairy cows eat grain.

According to Yardeni Research, increased oil prices will cost the average American household almost $2,000 in gasoline this year, while increased food prices will cost another $1,000. That’s $3,000 less money that households have to spend on other consumer goods and services, meaning the Ukraine war could push America into recession even as it stirs up food riots across the Middle East and North Africa. China may weather this crisis as it has already hoarded half of the world’s grain reserves, but other nations should start bracing for famine-like conditions if the Ukraine conflict is protracted.

Most war casualties are not from bombs and bullets, but from the famine and disease that come when the supply chain collapses. That is why the notorious four horsemen of the book of Revelation are religious deception, war, famine and pestilence. Deception creates wars, which in turn create famines by destroying supply chains. Disease sets in once malnourishment become widespread. Gilbertie is right: It is truly “a biblical event when you run low on wheat stocks.”

Soviet dictator Joseph Stalin cemented his control over Ukraine by deliberately creating famine that killed nearly 25 percent of Ukraine’s population. No one expects Vladimir Putin’s invasion of Ukraine to create conditions quite that bad, but it may still exacerbate global hunger. One director with Green Square Agro Consulting said Ukrainian’s 2022 wheat harvest will be 37 percent smaller than its 2021 wheat harvest due to the Russian invasion. This smaller harvest would still be big enough to take care of Ukraine’s domestic needs, assuming Putin allows farmers to harvest. But Ukraine’s 2022 wheat exports will likely be less than half of what they normally are even after Black Sea ports reopen.

That means high food prices around the world and riots in Arab nations dependent on Ukrainian wheat. Such chaos will undoubtedly benefit radical Islamic movements like the Muslim Brotherhood in Egypt and al-Shabaab in Ethiopia.

All these wars, famines and riots are a fulfillment of Bible prophecy. When Jesus Christ’s disciples asked Him for a sign of the end, He said, “Take heed that no man deceive you. For many shall come in my name, saying, I am Christ; and shall deceive many. And ye shall hear of wars and rumours of wars: see that ye be not troubled: for all these things must come to pass, but the end is not yet. For nation shall rise against nation, and kingdom against kingdom: and there shall be famines, and pestilences, and earthquakes, in divers places. All these are the beginning of sorrows” (Matthew 24:4-8).

Notice that Christ said wars and weather disasters would create food shortages. This is exactly what we are seeing today. covid-19 lockdowns drove global supply chains to their breaking point, and now a Russian invasion of Ukraine is about to turn these food shortages into a truly biblical event. These are the days we are living in right now!