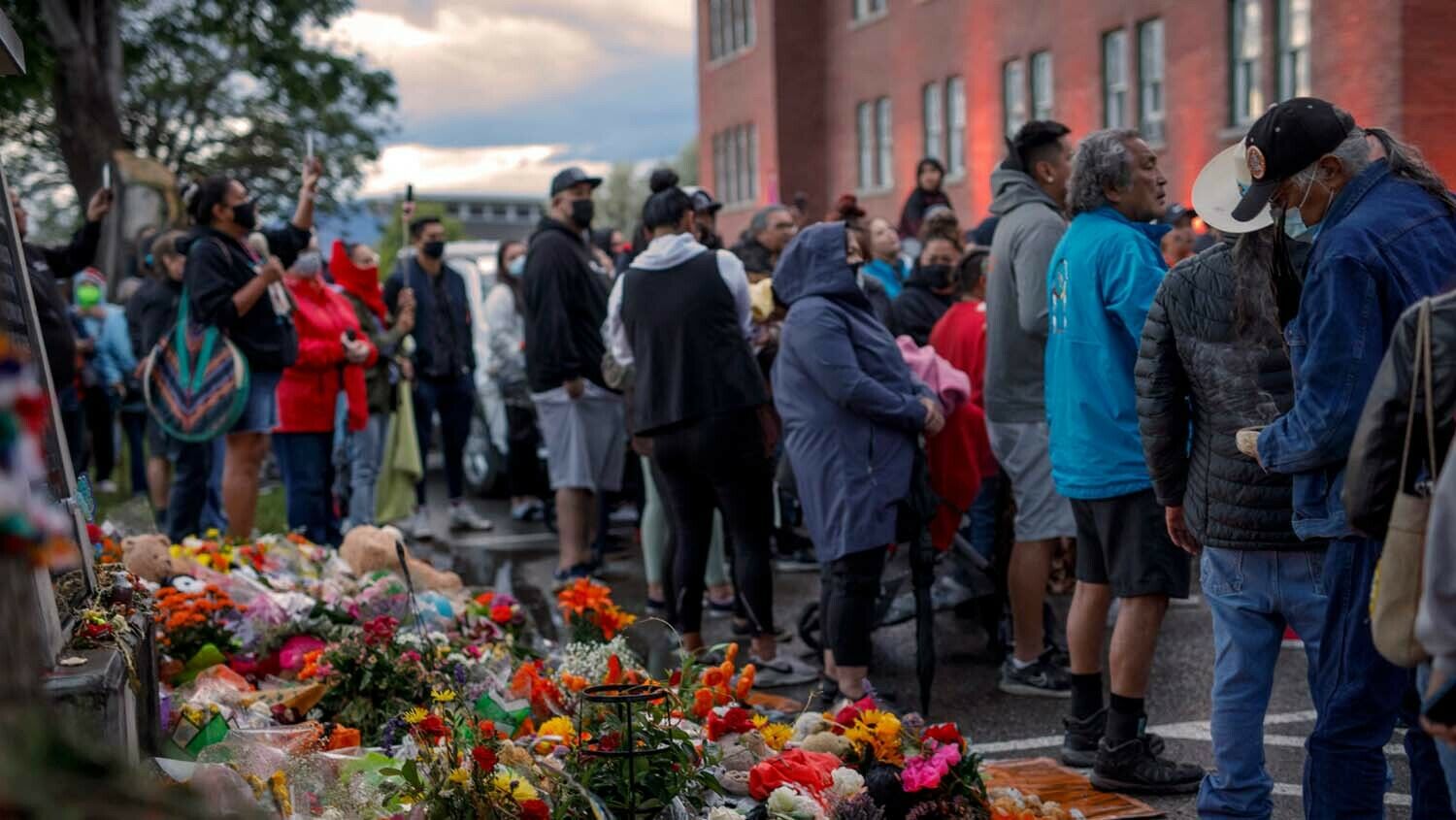 Fake news is being weaponized to blot out the name of Canada.

During the summer of 2021, Canada was literally a nation on fire. The revelation of 215 graves at the site of a former Kamloops Residential School sparked a wave of outcry, shame and violent protests across the nation. The Trumpet covered the story on June 10. Based on the available evidence, we reported that 215 unmarked graves were found at an Indian residential school in British Columbia. The evidence used was findings from ground-penetrating radar.

Indian residential schools were state-sponsored and church-run. They had a long operation time, from the mid-19th to late-20th centuries. The Catholic Church ran the majority, including the one in Kamloops. There is no denying that atrocities occurred in these schools. Children were forcibly taken from their families to the schools. Once there, many faced torture and sexual abuse—including same-sex sexual abuse. St. Anne’s Indian Residential School in northern Ontario tortured children with a homemade electric chair. Canada has since apologized for wrongdoing and has been trying to make amends.

Many former students of the schools also had very positive experiences. Many leaders in Canada’s indigenous community credit their time in residential schools with setting them up for success.

The claim of 215 uncovered bodies put a new spotlight on residential schools. It also stirred radicals to action. Soon, other residential schools claimed to find unmarked graves using the same technology. Statues of John A. Macdonald (Canada’s first prime minister), Queen Victoria and Queen Elizabeth ii were torn down. Some statues were even beheaded. Dozens of Catholic schools were destroyed by arson; so were churches of various denominations. The Canadian flag was run at half-mast for months. Canada Day was canceled and the nation accused of cultural genocide and erasure. The United Nations High Commissioner for Human Rights even said Canada was guilty of “a large-scale human rights violation.”

To this day, not a single grave has been confirmed. Not one body has been dug up.

Jacques Rouillard is professor emeritus of the University of Montreal’s history department. He wrote the following for the Dorchester Review in January:

The “discovery” was first reported last May … after an anthropologist, Sarah Beaulieu, used ground-penetrating radar in a search for the remains of children alleged by some to be buried there. … Her preliminary report is actually based on depressions and abnormalities in the soil of an apple orchard near the school—not on exhumed remains. …

From new research revealed at a July 15 press conference last year, the anthropologist scaled back the potential discovery from 215 to 200 “probable burials.” Having “barely scratched the surface,” she found many “disturbances in the ground such as tree roots, metal and stones.” The “disruptions picked up in the radar,” she says, led her to conclude that the sites “have multiple signatures that present like burials.” But she cannot confirm that until the site is excavated—if it is ever done.

So are there unmarked graves in Kamloops? Possibly. A child’s bone and tooth were found around the premises, suggesting something awry. But it’s also possible that the radar has detected little more than rocks or tree roots. Nothing can be known for certain until the area is dug up. But according to Chief Rosanne Casimir (chief of the Tk’emlúps te Secwépemc First Nation), there are no definite plans for an excavation.

Yet the media jumped on this story as if Canada had discovered its Auschwitz.

The cbc reported that “preliminary findings” revealed 215 graves of indigenous children. The Toronto Star wrote of the toppling of the statue of Egerton Ryerson, founder of the residential school system. The article quoted an organizer who said that “Canada is guilty of genocide.”

After it came out that these “unmarked graves’’ could be tree roots or other geological disturbances, the cbc reported: “Ground-penetrating radar survey efforts at former residential school sites around Keeseekoose First Nation in Saskatchewan found 54 potential gravesites, the community announced Tuesday.” A follow-up story at the cbc quoted an indigenous leader implying there could be 5,400 unmarked graves at that same site. Global News claimed December 31 that the radar had found more than 1,000 graves of children.

The Globe and Mail came a little closer to reporting the truth. Its February 15 article referred to “potential graves” and “possible unmarked graves.” “Hits are distinct radar reflections, often showing columns of disturbed soil consistent with a burial,” the article reads. “In most cases, ground-penetrating radar detects the shaft of soil atop a grave rather than a grave’s contents.” Yet nothing is said that these “hits” could mean little more than tree roots.

There is no mention from the mainstream media that this is a theory. Overlooked is how there are perfectly plausible alternative explanations for the radar’s findings and that nothing has been confirmed through excavation. The media make no mention of the unreliability of ground-penetrating radar. Instead, the mainstream media focuses on emotional and inflammatory language referring to genocide, holocaust and systemic racism.

There is also little mention that some of the clusters of alleged graves were found in old cemeteries. Residential schools were operated by churches. Churches would have cemeteries associated with them. Some of those cemeteries fell into disrepair and the burial markers fell apart or were removed. Wooden crosses would have long since decomposed. This is the case with alleged burial sites at the residential schools in Marieval, Saskatchewan, and Cranbrook, British Columbia. “There is no discovery,” said Sophie Pierre, former chief of the St. Mary’s Indian Band at Cranbrook. “We knew it was there. It’s a graveyard.” She continued: “The fact there are graves inside a graveyard shouldn’t be a surprise to anyone.”

This is in Canada. Some major media outside of Canada have been discrediting the genocide theory. Sky News Australia and Britain’s Spectator have given the story coverage. But not many outlets in Canada have.

This begs a question: Why was Canada’s mainstream media suppressing the most important facts while broadcasting a message of shame, outrage and national humiliation?

It’s because they, in alliance with and funded by Justin Trudeau’s Liberal government, have an agenda to fundamentally transform Canada.

In a 2015 New York Times interview, Justin Trudeau said, “There is no core identity, no mainstream in Canada,” and consequently that “[makes] us the first postnational state.” Trudeau’s vision is to remove the last vestiges of its identity as a British Commonwealth member. He led the way in declaring Canada as a systemically racist, colonial nation last summer.

Canada’s media ran with this message despite lacking evidence to support these claims. Any dissent was silenced as racist and another sign of why Canada needed to be fundamentally changed. This message of shame and humiliation to Canadians, despite the essence of the story being a lie, accelerated the media success of cementing control over Canadians.

A free and fair press is critical to our freedom. When this is compromised, nation-destroying dangers result.

The media in America and Britain have become political tools. They no longer take a dispassionate, objective view of events. Far too many in the media have embraced a far-left political view, to the point that they cannot even recognize how grossly partisan they have become.

Media empires are extremely powerful. The left-wing media are in a power struggle to get control—and they have been winning. Though unelected, they have grown too powerful for politicians to challenge. To directly challenge the mega-media often leads to political death.

This media control is being used to push a radical-left agenda. This agenda is an attack on the biblical identity of Canada. As explained by the late Herbert W. Armstrong in The United States and Britain in Prophecy, the English-speaking peoples around the world are descendants of ancient Israel. Right before Jesus Christ returns, there will be a time of bitter affliction as radical-left forces attempt to blot out the name of Israel (2 Kings 14:26-27).

“Blotting out the name of Israel” means erasing the history these nations have with God and removing this biblical heritage from our national identity. That was the sole purpose of the media’s reporting on the fake graves. The residential schools were a tragic and terrible disaster. But apologies have been made, reparations paid, and the tragedy remembered. The media’s crusade against Canada during the summer of 2021 was a well-crafted false narrative aimed to achieve cultural erasure of God in Canada. That is the agenda of the mainstream media.

To learn more, please request a free copy of The United States and Britain in Prophecy and read Mr. Flurry’s article “The Dangerous Left-Wing Media.”