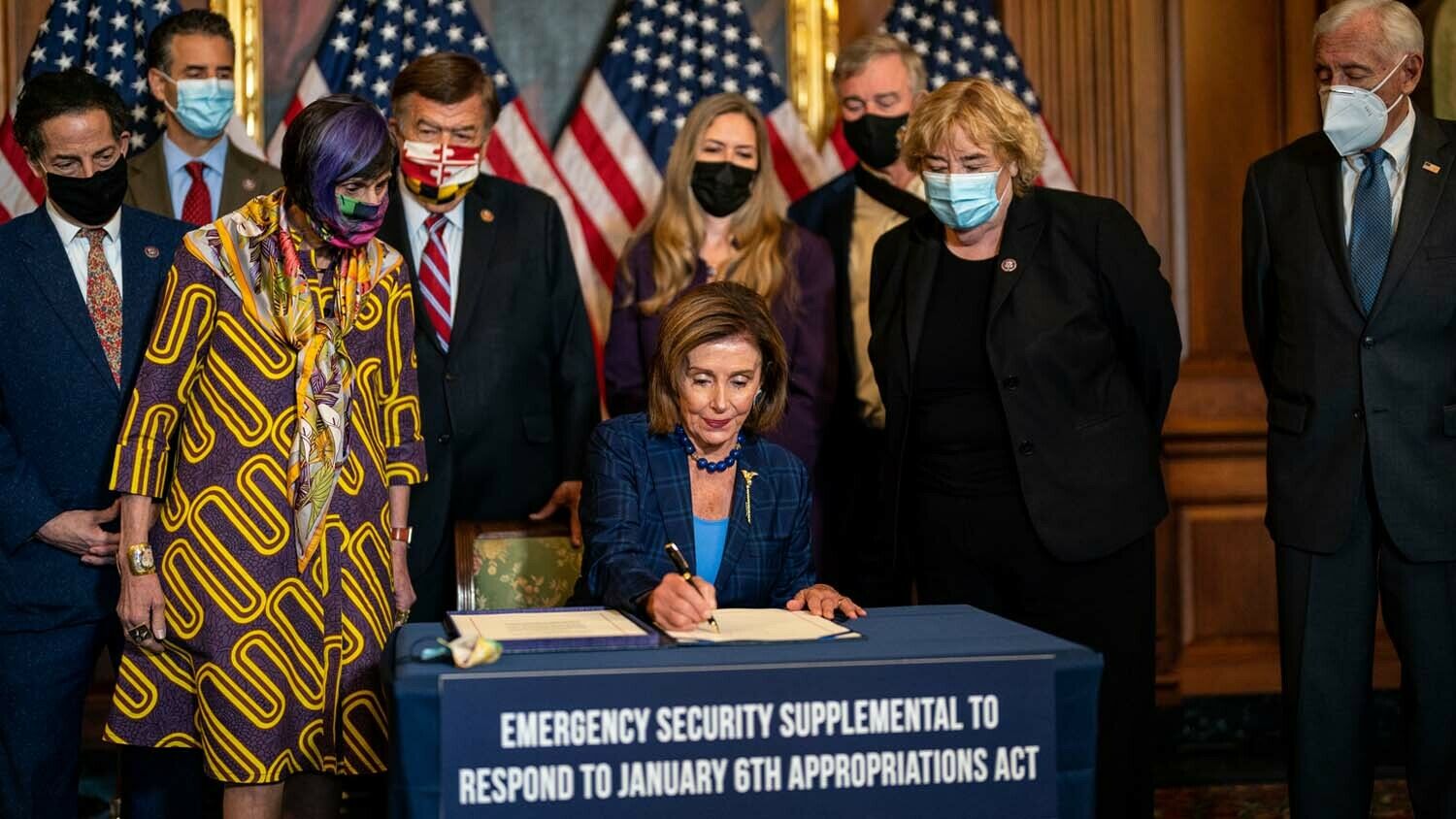 Speaker of the House Nancy Pelosi and others, during a July 30 bill enrollment ceremony for Security Supplemental to the January 6 Appropriation Act in the Rayburn Room of the U.S. Capitol Building
Kent Nishimura / Los Angeles Times/Getty Images

Another fake investigation to hide treason

The January 6 Committee, led by United States Speaker of the House Nancy Pelosi, is planning to subpoena all private January 6 phone records from all of Donald Trump’s family members and any Republican lawmakers who attended the “Stop the Steal” rally. This is on top of asking Big Tech for all social media posts of the same individuals from that day.

Pelosi said the committee is investigating Republican lawmakers Jim Jordan and Jim Banks, whom she banned from the committee, calling them “clowns.” Pelosi told 19th News: “We’ll see what the committee finds out about them.” Committee chairman Bennie Thompson said that “nothing will be off-limits.”

National Review wrote that Pelosi’s “comments seemed to play into a conspiracy theory that Banks and other Republican lawmakers helped orchestrate the riots. However, that theory has been roundly debunked by the fbi, which found that the attack was not centrally coordinated.”

The House committee does have subpoena power, but according to the Supreme Court, this form of investigation is illegal. The House only has power to investigate and subpoena for information needed for legislating. This clearly is for another motive.

If hundreds of people are already being prosecuted, and the Federal Bureau of Investigation concluded there was no centrally planned insurrection, then what is the purpose of the January 6 Committee?

Anyone who has followed politics for any amount of time knows the Nancy Pelosi “January 6 Committee” is an opposition research effort under the guise of a House investigation. The goal is to frame an extremist narrative favorable for the Democrats in the 2022 midterm election. That is the entire goal.

What the Mueller probe was to President Trump, the J6 Committee is to the maga [Make America Great Again] movement.

The January 6 Committee is the Mueller probe 2.0. It is not an honest investigation. It has the same twofold goal, as Sundance pointed out: continue the attack on Donald Trump and his followers, and cover up the massive corruption by Barack Obama and the “deep state.”

Trumpet editor in chief Gerald Flurry exposed these goals in his article “America Has No Helper”:

That second goal is the one most people have overlooked—but it is most important! The Mueller investigation’s goal was not only to keep all the actions against President Trump going, but also to bury all the illegal action. …

The Mueller investigation was a way to continue targeting members of the Trump administration and to cover up the truth about what Obama and the others had done and were plotting.

The January 6 Committee is continuing these two operations, only now the stakes are much higher for the radical left. The treason and fraud are even bigger now than in 2016.

Everyone in Washington, D.C.—every branch of government, every Democrat and almost every Republican—knew the Mueller probe was an illegal attack against Donald Trump. It is no different with the January 6 Committee.

Mr. Flurry wrote: “Everyone involved in permitting that investigation knew they were participating in an illegal, treasonous attempt to overturn the legitimate results of the 2016 election! That was the purpose of Mueller’s special counsel.”

The Democrats pulled off the greatest voter fraud plot ever and overturned the legitimate results of the 2020 election. Donald Trump is now in “exile,” and Barack Obama is in charge via the Biden administration. Now the Democrats are seeking to intimidate and attack anyone who dares to expose their corruption. The January 6 Committee claims it is investigating the “big lie,” when in reality, they are trying to cover up the big lie of voter fraud.

The radical left has been desperately trying to blot out any evidence of voter fraud and any government involvement in escalating the January 6 riot. But the evidence is slowly building. If everyone knows the real reason for the committee, as for the Mueller probe, then why isn’t anyone exposing it?

How could radicals keep all their corruption quiet? Why did some Republicans let them? Well, they all live by an understanding there in “the swamp”—as Washington’s political class is often called. The understanding is this: If you don’t go along with the way things are done, the established powers will make sure you lose everything. That’s why, for example, you see a Republican congressman characterizing Trump supporters as part of a “cult.” He is accusing 75 million Americans of being in a cult—yet thinks the way people in the swamp conduct business is good and normal. That’s how sick and warped even some Republicans have become.

Twenty House Republicans voted to allow the January 6 Committee to be formed. Even most Republicans are corrupt, enabling the radical left to destroy America!

We do not yet know all the details of the voter fraud or the January 6 fake insurrection, but we do know that the January 6 Committee will fail in its dual goals. Bible prophecy reveals that not only will massive corruption be exposed, but Donald Trump will return as president.

Mr. Flurry wrote in April 2021: “God could use this situation to expose the treason.” He wrote in January 2021: “I am also certain that we are about to see some of the biggest frauds exposed perhaps ever!” No matter how hard the radical left tries to bury the evidence, it will be exposed.

Mr. Flurry wrote in “What Will Happen After Trump Regains Power”:

Right now, the big question revolves around how Donald Trump will regain power. America is in the throes of an Antiochus administration that is rapidly driving the nation toward radicalism, socialism, amorality, class division and race war! As I wrote in our April issue regarding 2 Kings 14:26, America’s affliction is very bitter, and the nation has no helper!

There will be a massive shift in America. The corruption will be exposed, and at some point, Donald Trump will return to the office of president. However, the story does not end there. You need to know where all these events are leading. Please read Mr. Flurry’s article “What Will Happen After Trump Regains Power” to learn what the Bible says will happen in the near future.