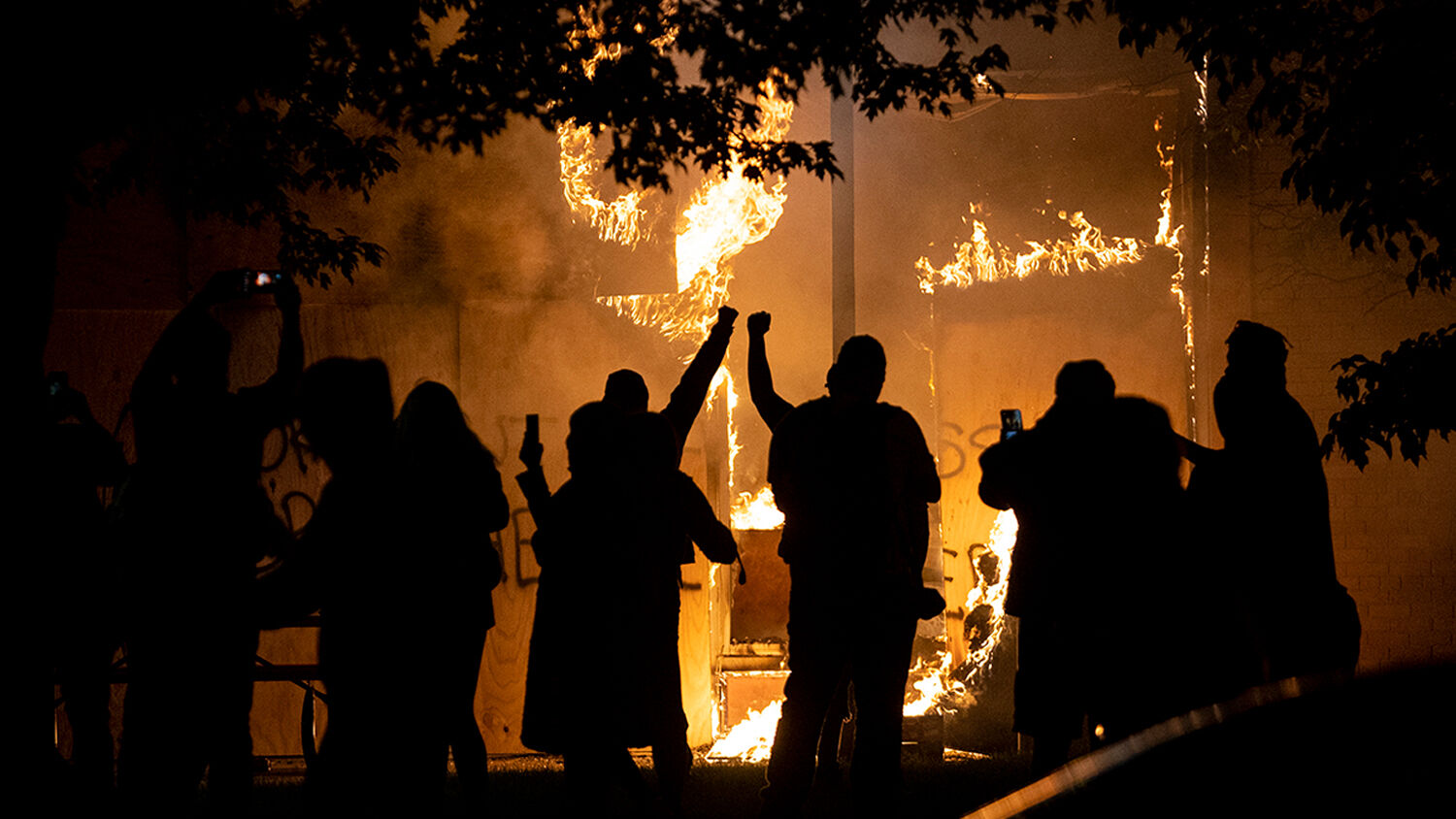 People cheer as the plywood on the door at Wells Fargo goes up in flames near the Fifth Precinct.
Getty Images

American cities are burning. Lawless rioters are destroying property, looting stores, attacking police and store owners, and committing murders. This started a week ago after a black man was killed in Minneapolis during an arrest. But it is about far more than that.

I have been warning about race conflicts in America since the earliest issues of the Philadelphia Trumpet. I want to share some quotes with you to show you how this problem has been building for decades, and, far more importantly, because the Bible prophesies that they will worsen and contribute to the downfall of the entire nation, if we don’t repent.

In 1992, following the acquittal of four Los Angeles Police Department officers for beating Rodney King, the city exploded in deadly riots that injured more than 2,300 and killed 63. In the June 1992 Trumpet issue, I wrote:

In 2011, Republicans tried to question Attorney General Eric Holder about Operation Fast and Furious. That was the operation in which the administration of President Barack Obama was smuggling automatic weapons to drug cartels in Mexico. Holder responded with vicious accusations that Republicans were racists for criticizing the program, since he and President Obama are African-American. I wrote in “U.S. Attorney General Ignited the Race Bomb” in the March 2012 issue:

Republican racism has become the battle cry of the radical left—led by the president and his attorney general! Mostly that charge is untrue. But many people are going to believe it is true and act accordingly. As the economy gets worse and people’s emotions become more heated, violent race riots are going to burst on the scene in our large cities. Do we think such hateful racist statements have no consequences? Like little children, the radical left makes these hateful statements and … the consequences … are going to be horrendous. Bible prophecy says so, but even common sense alone should tell us that! This is not President Obama bringing us together as he pledged to do in his presidential campaign. He is leading the way into violent divisions. And I do mean violent!

In April 2015, people were rioting in Baltimore, Maryland, after Freddie Gray, a black man, died in police custody. Before the cause of death was even known, protests against the police began, then erupted into riots. The six officers involved were later found not guilty of any wrongdoing, and three of them were even acquitted by a black judge. In the July 2015 issue, I wrote this in “Your Cities Are Burned With Fire”:

Later that year, after two incidents in which police killed black men in Minnesota and Louisiana, President Obama immediately posted on social media that these were “not isolated incidents” and emphasized “racial disparities,” insinuating that American police are racist, as he had done previously. Hours later, a black man went on a shooting spree in Texas, murdering five Dallas police officers and wounding seven more. A week later, a man who posted a video glorifying what happened in Texas murdered three officers in Louisiana. In “America Faces an Explosion of Racial Violence,” (September 2016), I wrote:

Such rhetoric is inciting evils that are quickly becoming far worse than those it purports to solve! …

Surely the statements the president has made—like his accusatory speech about those two policemen—help to stir up men like the Dallas sniper! Words have consequences! And they have many times the consequences when they come from the president of the United States! …

This is a slippery slope that is moving America toward a race war and rule by dictatorship or tyranny! …

I then reemphasized the prophecies of Isaiah, including Isaiah 1:6-7, which prophesied that our entire nation would be sick from head to toe, wounded, bruised, afflicted with putrid, untreated sores: “Your country is desolate, your cities are burned with fire: your land, strangers devour it in your presence, and it is desolate, as overthrown by strangers.”

Now we see terrible violence and destruction in our cities. Americans—and people all over the world—are seeing how quickly our racial tensions can snap into nation-threatening chaos. During the riots of the past week, other nations have sought to take advantage and join those who claim that police in the United States are racist. It is all aimed at destroying the enforcement of law in America, which will destroy America!

Why? Because Satan is real, he is attacking the descendants of ancient Israel, which includes the United States, and God is allowing it because we have disbelieved and disobeyed Him and turned to Satan’s way of sin.