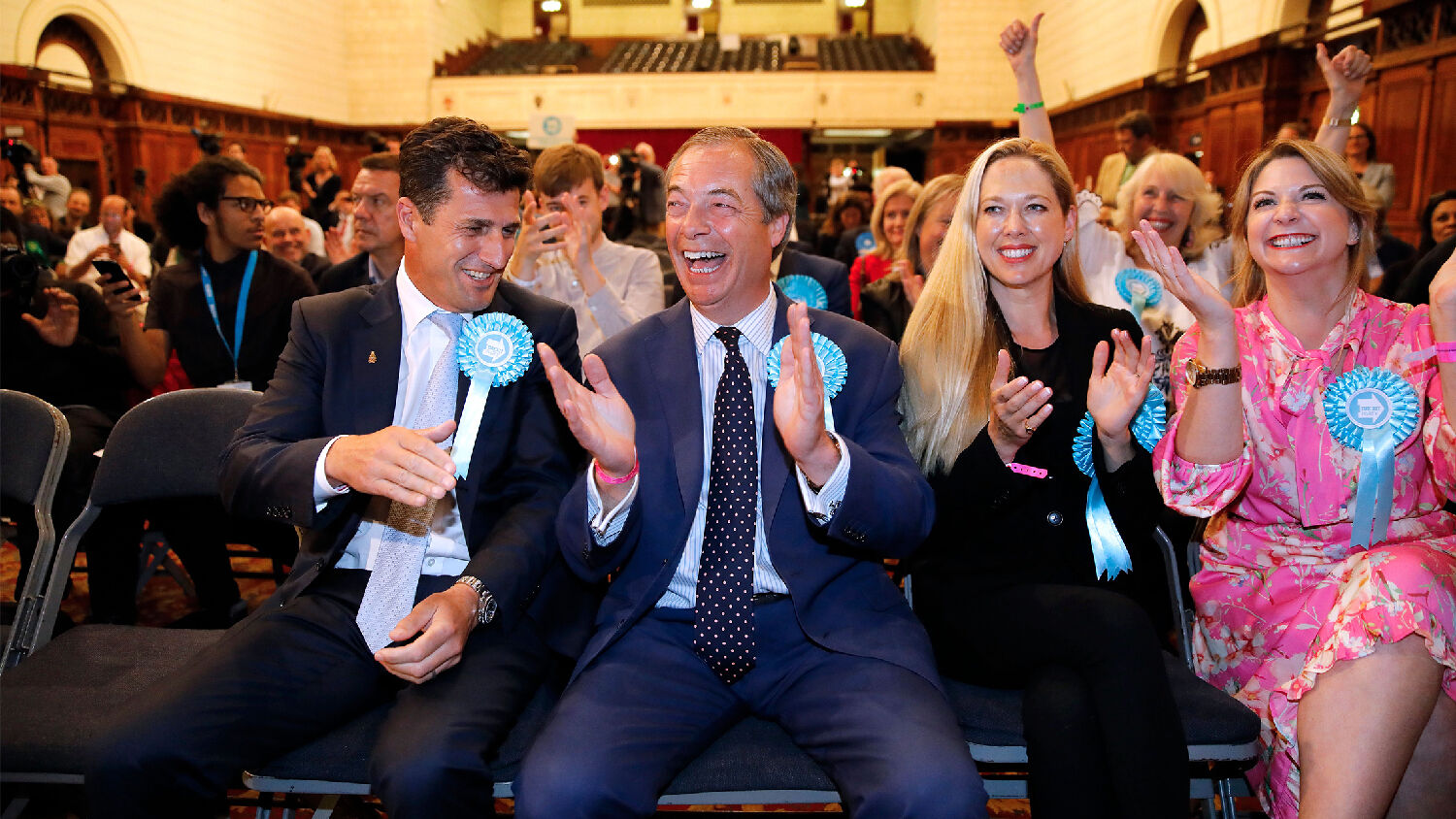 The far right win in Italy and France. Germany, the UK and Austria are in political chaos. What’s next for Europe?

Over the weekend, voters from 28 nations turned out to choose their representatives for the European Parliament.

Here in the United Kingdom, the results have been historic. Historically bad for the mainstream parties; historically good for the smaller parties.

Britain’s Conservative Party, which has been in government longer than any other over the last century and currently leads the country, received … 9 percent of the vote. It is in fifth place.

It’s a stunning and shocking defeat. Daniel Hannan, one of the party’s four surviving M.E.P.s, said it was the party’s worst performance in history.

“I never thought I would live to see the Conservative and Unionist Party, dominator of British politics for centuries, falling to a vote share of 9 percent in a national election,” wrote itv’s Robert Peston.

A lot of the support for the Conservative Party went to the Brexit Party—a party that, founded only six months ago, won the elections with 32 percent of the vote.

But just as surprising was the vote for Labour.

You would have thought that with the Conservative Party vote at historic lows, its main rival, the Labour Party, would have won by a landslide.

Instead, it too suffered catastrophic defeat.

Labour won 14 percent of the vote, coming in third. Left-leaning voters abandoned Labour. The Liberal Democrats, who have consistently resisted Brexit, won second place with 20.3 percent of the vote. They increased their number of M.E.P.s from just one to 16. The Green Party also had one of its best results, coming in just behind Labour with 12.1 percent.

British voters looked at the two parties they had been choosing between for the best part of a century, and they declared: A plague on both your houses. Combined, the Conservatives and Labour won just over a quarter of the vote.

This is just the latest major sign of a political system in crisis. And the cause is not hard to find. Britain voted to leave the European Union three years ago, yet a pro-EU House of Commons continues to block it from actually happening. On Friday, the conflict over EU membership claimed its second prime minister: Theresa May announced that she will step down after failing several times to secure a Brexit deal.

It’s not just the United Kingdom in political crisis. It’s all of Europe.

For decades the European Parliament has been dominated by two political groupings: the European People’s Party (epp), a center-right party, and the Progressive Alliance of Socialists and Democrats (S&D), a center-left party. Combined, these two have always controlled a majority of the seats and dominated the Parliament. But no more.

In France, Marine Le Pen’s far-right National Rally (formerly the National Front) beat the more mainstream party of President Emmanuel Macron. In Italy, the far right won by a landslide. Matteo Salvini’s Lega (League) party won 34.3 percent of the vote, a massive boost. Their coalition partner, the upstart left-wing Five Star Movement, won 17.1 percent. That’s a bit of a disappointment, but still a stunning result for an unconventional party founded just a few years ago by a comedian. Meanwhile, what used to be the traditional mainstream right-wing party, Forza Italia, won only 9 percent.

Eastern Europe is full of governments that are right-wing, if not far-right, and most of these did well. In Hungary, Viktor Orbán’s Fidesz won 52.3 percent of the vote—one of the only parties in Europe to win a majority. In Poland, the right-wing Law and Justice party won 45.4 percent of the vote.

But some of the most surprising vote results came from Germany and Austria.

The election plunged Germany’s ruling coalition into crisis, with speculation mounting that Chancellor Angela Merkel will be pushed out at any time. The coalition held a crisis meeting yesterday to decide what to do.

The far-right Alternative für Deutschland (AfD) received only 11 percent of the vote nationwide. (We are living in strange times when that gets an “only.”) Although it fared poorly in the west, it was outstanding in the east. In the German states of Saxony and Brandenburg, it was the most popular party. In Thuringia, it was only 2 percent behind the winner, Chancellor Merkel’s Christian Democratic Union (cdu).

Meanwhile, the far-left Greens also did well, with over 20 percent of the vote across the country.

This left Ms. Merkel’s cdu with 29 percent and her coalition partner, the Social Democratic Party (spd), in third place with 16 percent. That’s the worst result for both parties in any European Parliament election ever. As a result, the European Council of Foreign Relations wrote, “Panic is spreading among the spd membership.”

These two parties rule Germany in a coalition—one that Spiegel Online declared is now “in danger.”

“This instability can lead to a breakup at any time,” it wrote. “The cdu and spd are deeply insecure parties. If, for example, spd leader [Andrea] Nahles were to fall, the question of the continued existence of the coalition would immediately arise.”

Yesterday, Austria added the final piece of drama to the weekend. Chancellor Sebastian Kurz’s party did very well in the European Parliament election. But Austria’s Parliament booted him out with a no-confidence vote.

Kurz had been in coalition with the Freedom Party of Austria, a far-right party. A few weeks ago, a video emerged showing Freedom Party leaders willing to sell lucrative government contracts in return for donations to their party.

In the wake of the video, Kurz canceled his coalition, sacked the Freedom Party’s ministers, and called for fresh elections. He planned to stay on as a caretaker prime minister until the election.

But his left-wing opponents decided to humiliate him. Since Kurz no longer had a majority in the Parliament without the Freedom Party, Kurz’s rivals in the Social Democratic Party pushed through a vote of no confidence and forced him out of office.

Kurz still leads Austria’s most popular party and will stand for election in September, so he could be back in a couple of months.

But as Reinhard Heinisch, a political scientist at the University of Salzburg, told Deutsche Welle, “[P]repare for uncertain times—the postwar era of stability is over.”

All across Europe, the fringe and extreme parties are rising. Kurz was one of the first mainstream leaders to work with these parties, and it has led to a politics so polarized that opponents are going well beyond the normal ways of arguing with each other and using actions like motions of censure to try any means possible to pull their opponents down.

Trumpet editor in chief Gerald Flurry described these “uncertain times” in his cover article for the January issue of the Trumpet. He described this drop-off in support for mainstream parties, noting that: “There is a strong demand for a new leader in Germany. People can’t agree on what his policies should be—but they want someone different from Merkel, and someone with vision.”

These elections confirmed this trend in Germany, and show it applies to the entire EU. If you are status quo—you are out. Europeans want somebody new, somebody who approaches politics in a different way. Some are turning to environmentalist parties. Some are turning to the fringe right. But they are definitely turning away from the mainstream parties that have been ruling for decades.

A revolution in European politics is one of the key trends the Trumpet has been watching. Daniel 11:21 describes how it will happen. It tells us to watch for the arrival of “a vile person, to whom they shall not give the honour of the kingdom: but he shall come in peaceably, and obtain the kingdom by flatteries.”

The Jamieson, Fausset and Brown Commentary says that “the nation shall not, by a public act, confer the kingdom on him, but he shall obtain it by artifice, ‘flattering.’”

“In other words,” wrote Mr. Flurry, “a deceived public, or a group of European leaders, likely invites this man into power.” He continued:

Europe’s elections over the last weekend show that these conditions only continue to worsen.

For more on what the Bible says is coming, read Mr. Flurry’s article “Germany—A New King Is Imminent.”